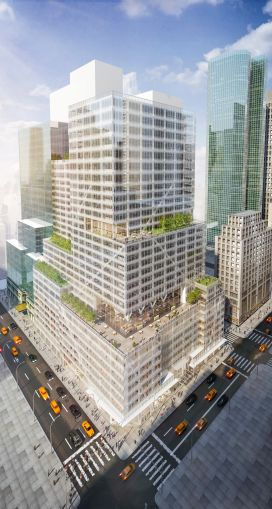 Beauty-products company Shiseido Americas Corporation, a subsidiary of Tokyo-based Shiseido Company Limited, has signed a 225,818-square-foot deal at 390 Madison Avenue to relocate its U.S. headquarters, according to L&L Holding Company.

The new digs feature multiple outdoor spaces and a unique double-height amenity area. Shiseido Americas will pay about $100 per square foot in the 15-year deal, according to Bloomberg Business, which first reported news of the deal.

The cosmetics company will relocate its headquarters from 900 Third Avenue between East 54th and East 55th Streets in the fall of 2018.

“In the end, our businesses are creative. We thrive on innovation, spontaneity and ideas that emerge organically from our interactions with one another,” Marc Rey, the president and chief executive officer of Shiseido Americas, said in a statement. “This beautiful new space will foster the kind of interplay that encourages us to think and create in exciting new ways.”

The renovation of 390 Madison includes a new all-glass facade and more open-plan, column-free spaces, as well as 13 outdoor terraces. L&L is overseeing the redevelopment of the property with Clarion Partners, the managing agent, on behalf of the owner New York State Common Retirement Fund.

“Bringing a globally renowned and innovative company like Shiseido to 390 Madison speaks volumes about the desirability of 390 Madison and all that has been invested to re-imagine and reinvent the tower to be a model 21st century work environment,” L&L Chairman and CEO David Levinson said in a prepared statement.

A spokeswoman for CBRE did not immediately return a request for comment.