On Tap at The Landmark at 57 West, the Far West Side’s New Movie House 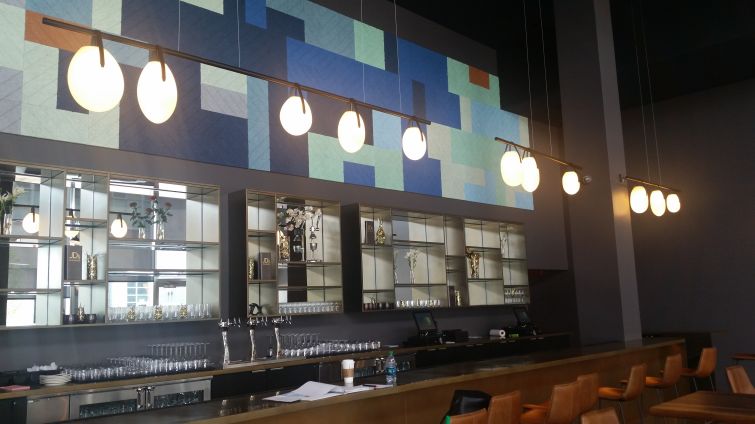 On Friday, billionaires Mark Cuban and partner Todd Wagner of Landmark Theatres are debuting The Landmark at 57 West, a new movie theater on the Far West Side of Manhattan. The 30,000-square-foot cinema, which includes a full bar with craft beers on tap, is at the base of Durst Organization’s Via 57 West apartment building via a 20-year lease (and an asking rent of $95 per square foot).

Commercial Observer took a quick tour of the eight-screen theater complex (theaters range in capacity from 30 to 175 seats) with Landmark Theatres representatives. The company boasts in marketing materials that it’s the “first brand new theater to open in Midtown Manhattan since 2002” when Regal E-Walk Stadium opened at 247 West 42nd Street between Seventh and Eighth Avenues.

Once inside towards the right is JD’s Place, a bar serving premium liquor, eight craft cocktails and light fare (caesar salad, hummus plate, fish and chips and pulled pork sliders). The design includes a bronze-clad bar, walnut high-top bar tables and leather seats. The light fixtures all come from Rich Brilliant Willing, a lighting design manufacturer based on Greene Street. And hanging behind the bar is an acoustical mural from Baux in Sweden.

Movie tickets cost a whopping (or maybe not so whopping) $18.50 for seats with and without a foot rest; the concession stand offers traditional items with a bit of a twist, like Eisenberg beef frankfurters on a pretzel bun from Bronx Baking Co., non-genetically modified organism popcorn with real butter, Melt ice cream sandwiches, Native Coffee Roasters drip coffee, macaron sets, Divine chocolate bars and Two Boots Pizza. (No firm word yet on whether Two Boots will be offering a special pizza for this particular theater, but it’s a distinct possibility given that it created The Eternal Sunshine slice for Landmark Sunshine Cinema!)

The movie house aims to be more eco-friendly with features like laser projections and laser sound as well as waterless urinals (there is one designed for use from a wheelchair).

The Landmark at 57 West is finishing up a green room for celebrities who attend for Q&A sessions, accessible via West 58th Street. And the theater has been outfitted with a hearing loop, “an induction loop system which magnetically transmits the auditorium sound to compatible hearing aids,” according to the Landmark Theatre’s website.

CO reported in April that with more demanding customers, movie theaters are tricking out their houses to entice people to leave their couches. While some are providing dine-in culinary options, The Landmark at 57 West is not. As a representative said, “We think the movie theater experience is sacrosanct. I don’t want to smell your hot wings.” She added: “For us it’s all about the movie. Landmark appeals to a difference audience.”

Being so far west makes it a bit challenging to get to the theater by subway (the closest station is at Columbus Circle), but Landmark is banking on customers from Durst’s three residential buildings—with 1,370 apartments—on the block: Via 57 West, Helena 57 West and Frank 57 West as well as other residents in the area, and those from out of town. (There are two adjacent parking garages.)