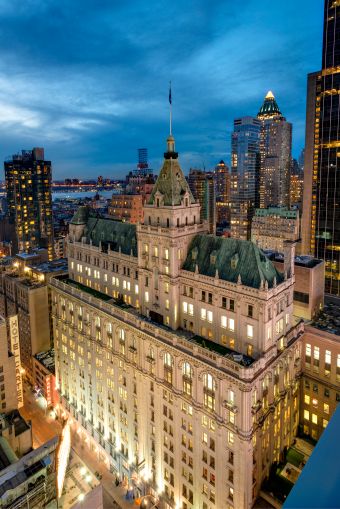 A decade after its eponymous tenant moved out, there’s still plenty of news-breaking at the old New York Times Building.

Deutsche Bank and SL Green Realty Corp. teamed up on the financing package, providing a $285 million senior note and an $85 million mezzanine piece, respectively, a source with intimate knowledge of the transaction said. JLL‘s Keith Kurland and Aaron Appel negotiated the two mortgages, each of which carry 10-year, interest-only terms.

Manhattan-based Kushner Companies bought the retail condo for $296 million from a joint venture between Five Mile Capital and Africa Israel Investments in October 2015. The new debt from Deutsche Bank and SL Green replaces a $295 million floating-rate loan that Brookfield Property Partners provided Kushner for the acquisition, according to the source. (A few months before the retail condo deal closed, Blackstone Group sold the 12-story office portion of the building to Columbia Property Trust for $516 million, four years after scooping it up for $160 million.)

Since Kushner Companies’ purchase, the retail component of the property is now fully spoken for.

New tenants the landlord has signed over the last year include National Geographic, Los Tacos No. 1 and a 11,970-square-foot food hall that will be curated by celebrity chef Todd English.

“In less than a year, we’ve repositioned the property and transformed it into a top-flight entertainment destination,” Laurent Morali, the president of Kushner Companies, said through a spokesman. “We’ve greatly enhanced the asset’s value and look forward to long-term ownership.”

Kushner’s leasing efforts are in line with the new wave of entertainment venues opening up in the Times Square area, like the 30,000-square-foot interactive National Football League store at The Witkoff Group’s 20 Times Square and the first-ever Hard Rock International hotel at Extell Development Company’s at 159 West 48th Street, an emerging trend that CO reported on in June. Gulliver’s Gate, which will occupy 49,000 square feet across two floors in the old Times building, will house the world’s largest miniature world. The tourist attraction signed a 15-year lease with Kushner Companies, paying $300 per square foot for the ground and $100 per square foot for the second floor.

A spokeswoman for Deutsche Bank declined to comment, as did a spokesman for SL Green.