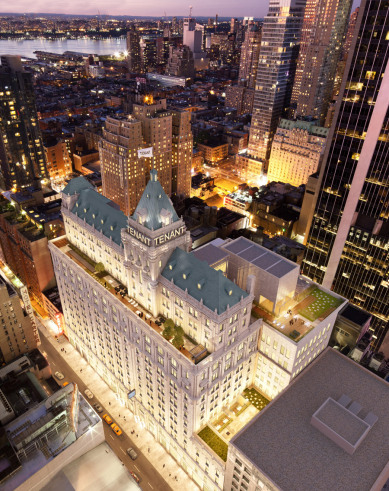 Called American Market by Todd English, the venue will be located on the ground floor of the building between Seventh and Eighth Avenues, according to a Kushner Companies release. (Jared Kushner, the chief executive officer of Kushner Companies, is the publisher of Commercial Observer).

The food hall is set to open in the summer of 2017 at the property, also known as the old New York Times Building. Asking rent in the 15-year deal was not disclosed, but the average ground-floor asking rent in Times Square is about $2,363 per square foot, according to The New York Post, which first reported news of the deal.

“We are confident that this will become an essential Times Square dining destination and we look forward to welcoming guests to the American Market by Todd English in 2017,” Milan Patel, the president of Outstanding Hospitality Management, said in prepared remarks.

JRT Realty Group’s Greg Smith and Kelly Simek represented Outstanding Hospitality Management in the deal, while SCG Retail’s Chase Welles and Alexandra Escobar brokered the deal for Kushner Companies. Smith and Welles did not respond to requests for comment on the deal.

With the signing of the food hall, Kushner Companies has fully leased its 250,000-square-foot retail condo, which it purchased in October 2015 for $295 million. A few weeks ago the landlord signed the first brick-and-mortar location for the popular Los Tacos No. 1, as CO first reported. Gulliver’s Gate, a 49,000-square-foot interactive miniature world display, and the 60,000-square-foot entertainment venue National Geographic Times Square: Ocean Giants, will also be in the building.

“In less than a year we’ve completely transformed an underperforming asset into a top-flight entertainment and dining destination,” Morris Harary, a managing director at Kushner Companies, said in a statement. “The American Market by Todd English will perfectly complement the retail condo’s entertainment venues.”