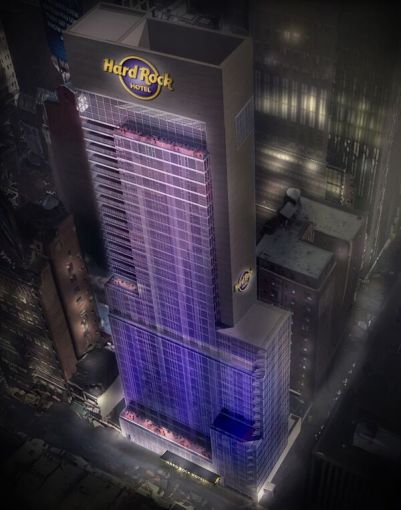 The new 445-room hotel, Hard Rock Hotel New York, will be between Avenue of Americas and Seventh Avenue, according to a press release from the hotel’s parent company, as part of a ground-up project being developed by Gary Barnett’s Extell Development Company.

“We’re both proud and eager to showcase the Hard Rock Hotels experience in New York City, a destination whose spirit and limitless energy aligns perfectly with our brand,” said Hamish Dodds, the chief executive officer of London-based parent company Hard Rock International, in a press release.

The hotel will have a lobby bar, a spa and its signature restaurant and lounge. It will not be closing down the existing Hard Rock Cafe that is at 1501 Broadway between West 43rd and West 44th Streets, the spokeswoman confirmed, declining to reveal any further details about the new building.

Hard Rock Hotel New York will keep up the brand’s music-focused theme by hosting live music events and maintaining museum-like displays of music memorabilia on its walls, according to the press release. The hotel’s rooftop will be used for activities from sunbathing to artist performance sessions to DJ sets. Upscale speakeasies—underground parties—will also be hosted at the hotel.

This stretch of Times Square is no stranger to the music business. Until recently, West 48th Street from Avenue of the Americas to Seventh Avenue was home to a string of musical instrument stores and dubbed Music Row. The shops were frequented by the likes of Jimi Hendrix, Eric Clapton and The Rolling Stones.

“Through many decades of change in Times Square, this block has always been about music; a place where locals, visitors and musical celebrities mixed as they shopped for the latest instruments and music hours before their live gig,” said Tim Tompkins, the president of the Times Square Alliance, in prepared remarks. “In short, never has a hotel been so perfectly situated.”

Last summer Extell bought a number of parcels in the area for $46 million in order to build the tower, according to Crain’s New York Business, which reported last week that a Hard Rock Hotel was coming to the Times Square area. Barnett did not immediately return a request for comment.