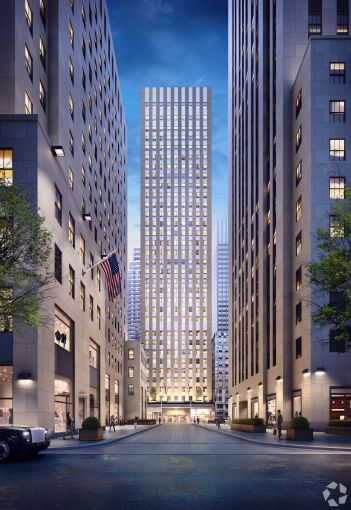 American Girl, the pricey brand that sells dolls at $115 a pop, is headed to Rockefeller Center from a nearby location on Fifth Avenue.

The retailer has signed a 40,000-square-foot lease to relocate its flagship store to RXR Realty’s 75 Rockefeller Plaza, according to a press release from the Wisconsin-based toy company. That space will be on two levels of the 623,000-square-foot building between Avenue of the Americas and Fifth Avenue. The asking rent was not available. The lease is for 15 years, according to a spokeswoman for the doll-maker.

“What could be better: it’s this great wholesome experience,” said William Elder of RXR. “I just think it sets the stage for the rest of the building with that kind of user, that kind of tenant anchoring the asset.”

American Girl is slated to open at the 69-year-old building in fall 2017. The doll-maker has tapped architecture firm FRCH Design Worldwide and designer MJD Interactive to develop the retail space that will include a media studio for interactive activities, private event rooms and a salon for both child and toy.

American Girl is currently based three blocks to the south at 609 Fifth Avenue between East 48th and East 49th Streets. It leases 21,250 square feet at the SL Green Realty Corp.-owned property, according to CoStar Group. The Mattel subsidiary opened its first store in Chicago in 1998 and the Fifth Avenue location in 2003, according to retail website Racked, which first reported news of the deal.

“Nearly 20 years ago, American Girl revolutionized the retail experience for girls with our first store in Chicago. Today, with our move to Rockefeller Center, we’re once again on a mission to redefine how girls and their families experience American Girl with a more purposeful, fun, and creative retail environment,” Wade Opland, American Girl’s senior vice president of global retail. “The new experience is our opportunity to reach more girls in more ways with new, relevant and personalized options.”

RXR signed a 99-year triple-net lease with British tycoon Mohamed Al Fayed in 2013, as Commercial Observer previously reported. The developer has been repositioning the post-World War II, 33-story building by installing new heating and cooling systems, renovating the lobby as well as restoring the landmarked exterior. An RXR spokesman did not immediately return a request for comment.

Update: This story was edited to include the length of the lease, the broker in the deal and a comment from RXR.