The Rent Is Still Too Damn High: Zaro’s Shuttering Bronx Outpost After 56 Years 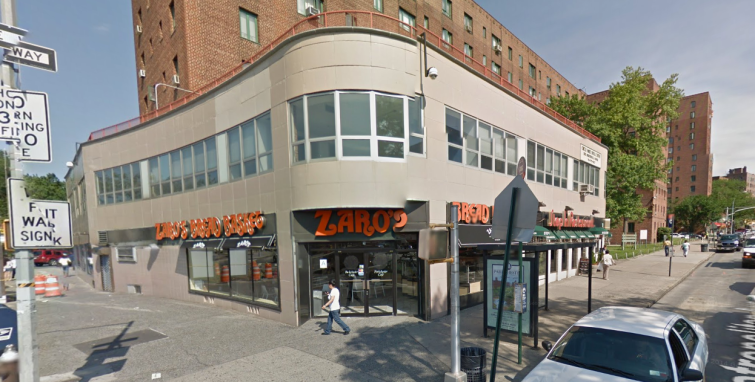 The Zaro’s Bakery in the Parkchester section of the Bronx is going stale.

The popular New York City bakery chain’s location at 29 Hugh J. Grant Circle is set to close its doors on Monday, after the Christmas holiday, as has been widely reported. Zaro’s owner said rents in the Bronx have gone up so high that he’s forced to close his doors, according to News 12. The bakery was notified six weeks ago that the lease wouldn’t be renewed, the channel noted.

Landlord Olshan Properties said in a statement to NY1 that the multi-generation, family-owned bakery couldn’t meet the terms of a lease renewal. The 56-year-old bakery will be replaced by a Boston Market, according to the New York Daily News.

Zaro’s, which first opened in the Bronx in 1927, set up its Parkchester shop in 1959. The bakery still has 10 locations throughout the New York City metropolitan area, including in Pennsylvania Station and the Port Authority Bus Terminal.

The Bronx meanwhile has been popping up on developers’ radar as a new option for investment and development in New York City. That has led to the emergence of more big-box retail and companies in need of large industrial space crossing the Harlem River and into the borough, as Commercial Observer reported earlier this year.

Zaro’s Parkchester locale joins the list of notable New York City stores to shut their doors in 2015. Others include FAO Schwarz at the General Motors Building, or 767 Fifth Avenue, as well of the Market Diner and Hogs & Heifers, as CO reported earlier this month.

One of the big questions going into the New Year is how retail rents will fare throughout the city. Brick-and-mortar sales nationwide amounted to only $12.1 billion between Thanksgiving Day and Black Friday, as CO reported in November, a drop from the $13.6 billion in sales the same time a year earlier.

Chain stores seem to be struggling to expand in the Big Apple in general. The Center for an Urban Future released a report this week that showed a 1 percent growth of retail chains between 2014 and 2015. The chain with the most stores? Dunkin’ Donuts.