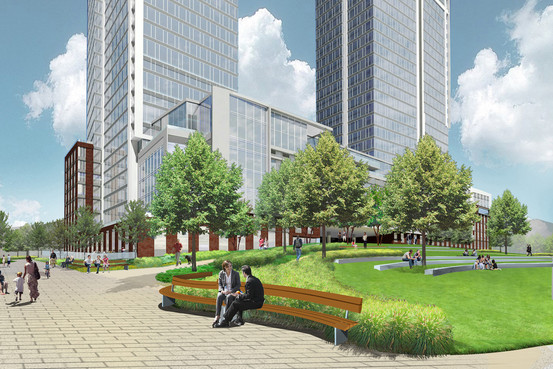 A rendering of the project at 77 Commercial Street. Guelda Voien

A partnership of The Chetrit Group and Clipper Equity took a $27.5 million bridge loan, backed by the land at 77 Commercial Street in Brooklyn’s Greenpoint neighborhood, Commercial Observer has learned.

As Commercial Observer has reported, the pair plans to develop a 720-unit, two-tower residential complex at the address. The land looks over Newton Creek—some of the last undeveloped waterfront land in the nation’s trendiest borough.

The City Council approved the plan last year, according to reports.

The two-year loan, with an interest rate over U.S. prime, was provided by New York Community Bank, a source close to the deal said on the condition of anonymity. The fixed-rate loan features all interest-only payments. The loan will be used to acquire air rights, the source said.

“The borrower acquired the waterfront site in 2012 and recently finalized a development agreement to acquire additional air rights from New York City Housing Preservation and Development,” said Mr. Savariego via the spokesman. “Meridian arranged a competitive balance sheet land loan to provide the borrower funds for the air rights purchase and additional time to finalize plans and arrange construction financing for the project.”