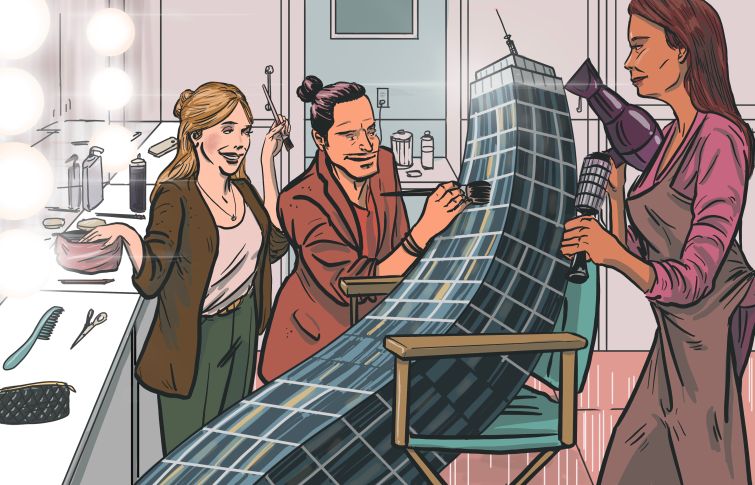 Computer-generated imagery isn’t just for the silver screen anymore as engineers say no to Hollywood and yes to a real estate paycheck.

BeyondView, under the leadership of CEO Kul Wadhwa, is one firm that has stacked its ranks with defectors from showbiz who can whip up Pixar-quality digital twins and give clients an idea of how buildings will feel once barren spaces are built out.

Using prepared materials such as blueprints or photos, BeyondView is able to create digital twins of commercial and life science spaces without having to make scans like similar outfits, and they say they do it at a lower cost compared to their competitors.

Which, after a bit of fundraising, has left the small firm with some room to grow up to 100 times its current size, according to Wadhwa, who gave Commercial Observer a rundown of how BeyondView operates in November.

“No one knew anything about real estate going into this. It wasn’t what we did before,” Wadhwa said. “The original company, we digitized humans. So most of our staff work on the ‘Lord of the Rings’ and ‘Avatar.’ All we knew about real estate was paying our own mortgages.”

Wadhwa, who worked for nearly seven years in business development for the Wikimedia Foundation, among many other pursuits over the last couple of decades, said it all started when BeyondView needed new office space of its own. In order to envision what the space should look like, one colleague, Jeremy Yabrow, who formerly worked at Pixar Animation Studios as a build engineer, began playing around with the company’s own technology.

Other people who helped build the firm include George Borshukov, who was the director of creative research and development for Electronic Art — better recognized as EA Games — where he worked on projects like Tiger Woods PGA Tour and Fight Night Round 3. He has since left BeyondView as chief technology officer and works in digitizing humans for Epic Games.

Chairman of BeyondView, Peter Cuneo, the former CEO of Marvel Entertainment, was responsible for giving the Ironman franchise the greenlight. Other team leaders at the imaging firm have come from production companies such as Linden Labs and DreamWorks.

Pretty soon, BeyondView was building a client base in the office leasing industry. But as life sciences boomed with the fallout from the pandemic, the firm began turning its attention to those spaces and the need for more exact projections of labs and the equipment that would be moved in.

The firm has some big-name clients too, having recently worked with Silverstein Properties, taking spaces in 120 Broadway from white-box format and providing an interactive layout of what the built-out space could look like after a little elbow grease. The Equitable Building, as it is also known as, has been undergoing a $52 million makeover initiated in 2019 that’s restoring much of the space to its original 1915 condition.

“We used to scan humans, we used to do the same thing like with LiDAR, but now we’re just training machine learning programs and AI,” Wadhwa said, referring to laser imaging often used in computer-generated imagery. “Now we can create it if we just have a floor plan, maybe some reference photos. … Our eventual goal is [for clients to say], ‘Hey, this is all I have, I need it turned around in a few hours.’ That’s where we’re eventually going to go.”

Wadhwa is keeping his ear to the ground, too. According to brokers he has spoken with, the turnaround time for digital twins is typically slow and usually has to go through an architect, which alone can take weeks.

“Right now, we’re just speeding up the commercial leasing process, but the fact that it’s a digital twin, we can start adding more and more stuff behind the scenes,” Wadhwa added. “Everybody we’ve talked to has said that they have to use like 15 pieces of software, and then it gets more complicated. Our whole philosophy is what you see, you should be able to understand it, it should look cool. My kid should be able to look at this and say, ‘I want to use this spot.’ ”

Once the digital twin is created, it can be accessed through a game engine that lets clients interact with it. As for deciding how the twin should look, many of BeyondView’s clients have had designers and architects on tap who collaborate with the software engineers. Other clients would like BeyondView’s team simply to handle that side in the interest of time, for which there is someone in-house at the startup who manages it.

Eventually, Wadhwa believes BeyondView will expand that department and hopes the AI will eventually provide much of the aesthetics. Then small tweaks can be made at the client’s request.

“Everything that’s in the scene is codified and summarized in a spreadsheet as data so that we can make calculations, like base costs, how many workstations, what kind of desks, how much in contracting expenses will it take to do the construction,” Yabrow, the director of engineering at BeyondView, said. “In the normal viewer, we can just go back and explore with the financial data right at your fingertips.”

Regardless of the uncertainty, Wadhwa said BeyondView charges the same price or less compared to other firms creating digital twins.

But with digital twins still being an up-and-coming real estate tool, Wadhwa doesn’t see a lot of crossover between what BeyondView does and what similar firms, such as Matterport, are putting on the market. For example, Matterport requires technicians to actually enter the space with specialized cameras and take complex images over 10 feet or so, a major chunk of time Wadhwa said his company has trimmed out of the equation.

But BeyondView is not the only firm streamlining the process of duplicating spaces. Others seem to have their own advantages for clientele.

Matterport, for example, captures current conditions and gives brokers the ability to show property digitally, while buyers can make better informed decisions about a property without seeing it beforehand. One in five clients who make an offer on a property end up buying sight-unseen, according to the company.

Planitar’s iGuide has its own imaging technology to create exact copies of spaces without the need for measurements. Instead, it simply counts pixels to calculate dimensions. 3D scans of spaces larger than 100,000 square feet can be completed in less than five hours, according to iGuide.

The technology is new, but an old rule still applies: Time is money.

“During the production of ‘Avatar,’ it took about 24 hours to do a rendering of a human,” Wadhwa said. “We can get [a rendering] done in one hour. We wanted to make sure that when people engage with a property, it feels like a real experience and they make really good decisions about that.”