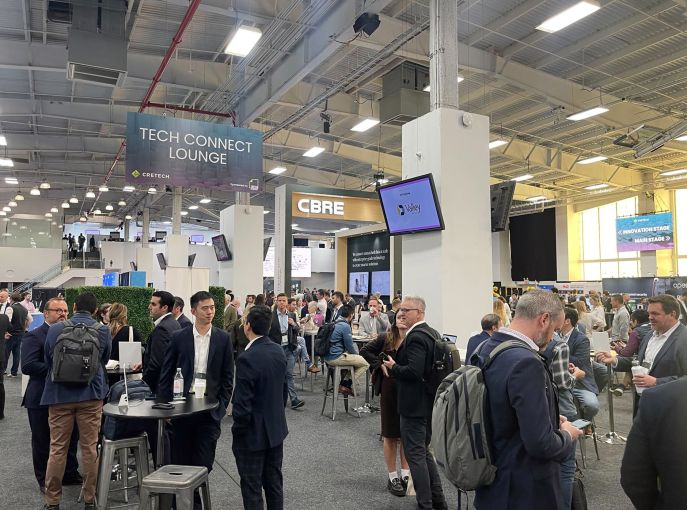 The area surrounding Manhattan’s Pier 36 was teeming with the unusual sight of men and women in professional attire on the morning of Wednesday, Oct. 12, all flocking to the convention space for the first day of CREtech New York.

The annual two-day event drew investors, innovators and real estate executives looking for ways to get the edge in a rapidly evolving proptech industry, especially in lingering challenges of the pandemic era. As many as 2,500 attendees were expected, making CREtech New York in 2022 the largest proptech conference in the U.S. to date.

The conference arrived amid a wobblier proptech industry. A midyear survey of proptech principals and venture capitalists from VC firm MetaProp found a decidedly pessimistic view of things as 2022 bleeds into 2023. Based on a scale of 1 through 10, MetaProp’s investor confidence index came in at 5.8, the lowest investor rating to date, and well below the all-time high of 9.3 reported six months earlier. The startup confidence index was 4.2 out of 10, and, as with investor sentiment, it was the lowest to date, receding from an all-time high of 8.3 a year ago.

Nonetheless, the show went on at CREtech’s five stages and numerous booths.

The main stage saw speakers such as Laura Hines-Pierce, co-CEO of Hines, who spoke with Commercial Observer Editor-in-Chief Max Gross about how the pandemic clicked the fast-forward button on the industry’s rush to modernize and digitize the built environment. (Full disclosure: Commercial Observer co-sponsored CREtech.)

“In some ways, it is technology-enabled, but it also means bringing a hospitality lens to our service,” Hines-Pierce said. “I think that’s a big shift in the industry that’s been going on for a while, but it’s another place the pandemic has really accelerated. We’re really shifting our focus in property management from client service to experience, which is something that tenants are looking for as they’re continuing to bring their people back to work.”

In terms of how they build, Hines has changed how it does things by integrating drones into the construction process and using digital twins. This comes into play with its redevelopment of South Station in Boston, where it is helping the city get expanded bus and train capacity. As part of the deal, Hines also gets to build a more than 1 million-square-foot mixed-use tower with office and condo space atop of the transportation hub.

Will O’Donnell, managing director of Prologis, whose industrial warehouse firm just completed a $26 billion deal to acquire Duke Realty, talked about how the pressure is on for providers of industrial space.

E-commerce blew up during the pandemic, obviously, putting significant strain on supply chains all over the word and driving rental demand in many industrial markets to capacity. But now being the biggest owner of industrial assets in the country, like Prologis is, is not easy whatever the financial returns, according to O’Donnell.

“As you’re starting to have to deliver on these accelerated time frames, it really impacts how you look at liquidity and network placement,” O’Donnell said during his onstage moment. “From the real estate side, we’ve been really focused on acquiring assets. And, when you look at our portfolio, 95 percent of it is within a pretty tight radius.”

O’Donnell explained that this was for the sole purpose of being able to help tenants meet the tight delivery times that consumers now expect. Prologis uses technology to aid tenants such as Amazon to build networks to dispatch any product to the customer within promised windows of time.

Beyond heavier hitters such as Prologis and Hines, CREtech offered peeks into lesser-known companies’ technology and goals.

One firm, inCitu, uses public and private data from developers to not only provide communities with up-to-date information about projects happening in their neighborhoods, but also create virtual reality experiences where average people can get a feel for how a project will impact their environment.

Planitar’s iGuide provided demonstrations of its camera and imaging system that takes 360-degree images of an asset with interiors that can be measured using only the pixels in the image. It also allows users to create a 3D scan of a space over 100,000 square feet in less than five hours, according to a representative from the firm.