Digital Twinning in Buildings Goes Well Beyond the Digital 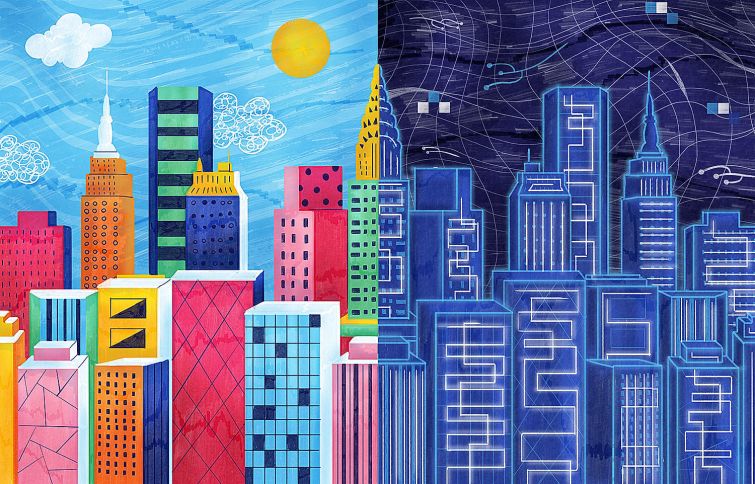 At first glance, NASA and commercial real estate have little in common. Yet in strategizing for a more efficient future, outer space and built space aren’t all that different. To advance their respective galactic and environmental endeavors, both utilize the same technology: digital twins.

Digital twins are an increasingly common technology in commercial real estate, thanks in part to the boom in proptech and the growing emphasis on sustainability. Yet the concept of digital twins first gained traction in the 1960s, when NASA introduced an early version. Following the Apollo 13 mission — yes, the one from that movie starring Tom Hanks — NASA employed a digital twin to assess and evaluate engine intricacies.

Since then, digital twins have come down to Earth … literally. Within the last five to six years, they’ve been gradually integrated into the dialogue surrounding commercial real estate, and the technology is being used to represent real-time models of real life buildings.

“A digital twin is creating a digital profile of the building in a way that you can use technology to anticipate and monitor and plan for your building’s life cycle, both in energy and in flow and in people,” said Michael Phillips, principal and president at real estate investment and management firm Jamestown.

During the summer, for example, landlords will likely confront new patterns of tenant engagement. People tend to go on vacation, so rather than cool and light an entire building, landlords can use ongoing feedback from a digital twin to help landlords decide which floors to open, light, and cool, according to Wynn.

Such tools remain in the early stages of integration, but their climate-related impact bodes well for the long-term.

“I think digital twinning will become a base standard for buildings as they move forward,” said Phillips. Digital twins will grow alongside the built environment at a pace that depends on data access and will eventually become ubiquitous, Phillips said.

That’s because digital twins are particularly useful in retrofits. Though the design and construction steps surely shape a building’s later efficiency, developers can’t always start from scratch. Rather, the real estate industry must get creative to tinker with already in-use developments.

“Ninety percent of the buildings that will exist in 2030 already exist,” said Michael Jansen, CEO and founder of urban digital twin platform Cityzenith. “The real problem in the country is not new buildings … so it has to be retrofitting, which is the elephant in the room.”

For companies unsure where to begin in retrofitting buildings, digital twins present a workable roadmap to rebuild and repurpose their assets.

“They are systems of systems tools that allow multiple users to integrate multiple softwares and data systems,” Jansen said. He pointed to some combination of 3-D models, public data and sensors that work together to simulate various outcomes. Based on analyses of data, digital twins can then draw actionable conclusions that direct landlords in managing and optimizing operations.

When it comes to making greener buildings, these conclusions are all-encompassing. According to Jansen, digital twins can help optimize the energy management of a building; evaluate the renewable options for that particular property; and calculate the carbon offsets required for a building to achieve net-zero status or other climate targets, as well as monitor emissions in real-time.

An example of this widespread promise includes Cityzenith’s Las Vegas digital twin — a virtual copy of part of that city’s downtown — which aims to help building owners achieve net-zero carbon emissions. Still in its early stages, the twin has begun to integrate data from Las Vegas’ downtown region in conjunction with Cityzenith’s “Clean Cities — Clean Future” initiative. According to the Cityzenith website, the project aims to “transform mobility, air quality, noise pollution [and] water management,” as well as emissions.

Although operational twins have a clear role to play, they are limited to addressing already built space. As such, new buildings require models of their own — and a digital upgrade in sync with a portfolio’s emerging ESG goals.

As an architecture firm, Gensler is primarily interested in what Wynn deemed “design twins,” as opposed to those “operational twins.” Wynn noted that these twins aren’t typically defined as digital twins, as they don’t monitor a building in real time. Instead, they are akin to energy models or used alongside operational — read: digital — twins.

For the purposes of sustainability, however, design twins have a similar usage and impact as strict digital ones.

“The way I’m using that definition is saying that any digital representation of a space, whether in design or built, is really a digital twin,” said Wynn, broadening the definition of twin technology.

Semantics aside, design twins have similar goals, techniques and outputs to digital twins. They also approach sustainability from a unique vantage point; they can evaluate and react to a building’s potential environmental performance before it’s ever been built. This perspective allows developers, architects and engineers to understand building operations prior to spending money, beginning construction, and releasing carbon via inefficient materials.

In this vein, design twins have financial benefits, in addition to environmental ones. Many projects are slow-moving and take years to come to fruition. Design twins can therefore act as trial runs, helping developers understand how a building may function and adjust accordingly for assessed setbacks. The simulations can only predict so much, though.

“[A digital twin is] real-time feedback from different sensors,” said Violet Whitney, senior product manager at Delve by Sidewalk Labs, an artificial intelligence-powered, Google-owned neighborhood planning product. “But what it doesn’t capture is maybe more of the long-term consequences that could’ve prevented something like that in the first place.”

Delve is essentially a design twin that front-loads a project with pro-environmental considerations. Such technology works in tandem with operational twins; employing various models from all stages of development is likely to yield a well-rounded and thorough understanding of a building’s energy systems and emissions. When used in conjunction with real-time twins, products like Delve can ensure that architects, developers and landlords understand how a given building operates — and may continue to operate throughout its lifespan.

“We can help [developers] by generating many designs that vary, that show them a bunch of scenarios,” said Whitney.

Delve relies on greenhouse gas modeling, as well as other quality of life variables, to help developers decide what to build onsite. Models assess the interplay between the natural environment and the tenant’s experience; understanding how light, shadow and solar will interact within a space is crucial, both from the standpoint of ultimate tenant happiness and environmental integrity.

The gradual consideration of these factors reflects a change in developer and owner goals alike. Whether employing a digital twin before or after a building’s inception, real estate companies across the industry are increasingly focused on outcomes, Whitney said.

It is this goal-driven mentality that will become one of ESG’s greatest assets. By assessing what exactly a building’s outputs are and from where they’re coming, digital twins — whether design or operational — hold developers accountable to change.

To get these results, however, a company must first create a digital twin. Gensler begins with a Building Information Model, widely known as BIM and a standard technology used by architects. Once this model is ready, data is then layered into a building’s geometry for the sake of simulating and analyzing a potential design’s performance.

For an energy use study, the BIM can assess how daylight affects design, said Wynn. It taps into where the sun is located relative to the building. Design twins synthesize various aspects of a project’s surroundings, neighborhood, materials and potential uses to allow for educated and intentional construction.

“[Digital twin is] a term that is being defined as we speak,” said Wynn. “So I think somebody could make the argument that a really, really defined BIM model is actually kind of a rudimentary digital twin.”

Yet to create models that actually help the environment, Gensler, as well as the likes of Jamestown, Cityzenith and Delve, must collect ample and accurate data. Finding this information isn’t so simple — a challenge that has become the norm in attempts to implement pro-ESG policies.

“We’re at the stage where we’ve got all this data, but it’s actually harder than it sounds to put it into one coherent picture,” said Wynn. “Some manufacturers have really good data; some don’t.”

The lack of consistent data presents a challenge in deciding between multiple designs. Yet Whitney stated that data collection proves more difficult for operational twins than it does for design models. Because design twins rely on upfront simulation, data mining is more straightforward and less subjective.

Still, the overarching emphasis on data will skew the integration of digital twins toward larger corporate portfolios. Bigger companies with more significant holdings tend to have richer and greater quantities of statistics, so they are therefore at an advantage in creating and utilizing accurate and comprehensive digital twins.

Data-driven asset classes represent the high-end of the market, said Jansen. These include retail, offices and Class A residential buildings, as well as campuses. Yet he predicts that this limited, upper integration of digital twins is only a short-term pattern.

“Eventually digital twin products, including ours, will have the T.J. Maxx version for the homeowner,” Jansen said.

Although digital twins do require energy in order to process heaps of data, they ultimately save far more energy than they consume. “The marginal amount of energy that would be consumed by the hardware in the course of making these calculations is nothing in comparison to the savings that are generated by the assets themselves as a result,” Jansen said.

Given these reductions, tenants have been especially receptive. Sustainability is increasingly important for the savings and the public perception, never mind the ethics, so employers must attract and retain a workforce that increasingly cares about its carbon footprint. A sustainable building is therefore a win-win-win for tenants, developers and the environment.

This central motivation encompasses the heart of digital twin usage.

“What really matters is,” Whitney said, “ultimately, do we end up building a place that ends up being better for the people that live there and the people that would experience the place?”