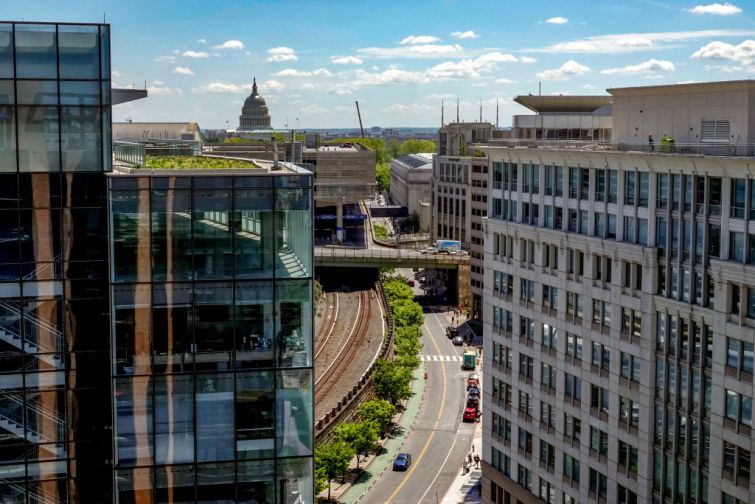 Held virtually on Sept. 22, the forum consisted of two panels, the first of which — “Looking Forward: Economic Headwinds, Shifting Industry Trends & The Nation’s Capital” — centered around the office.

“The definition of what is office today is changing,” said Gary Block, partner and chief investment officer at private equity firm The Meridian Group. “You’re going to get different answers from every single person.”

Chava Gourarie, an associate editor at Commercial Observer, moderated the forum at large.

Each of these panelists offered a different perspective on the ways offices can attract tenants and stay afloat. Amenities, as per usual, anchored the discussion, though fancy upgrades are especially important in D.C.; the city has the lowest return-to-office rate of any major city. Roughly half of D.C. residents worked remotely in 2021, the highest percentage nationwide.

Although this statistic sounds discouraging, the lag in D.C.’s return-to-office timeline doesn’t have to be — nor should it become — the norm.

“There’s no reason for D.C. to be an anomaly,” said Deitelzweig, noting a dissatisfaction with the numbers.

To entice tenants back into the office, Marx Realty has turned to flashy forms of hospitality, certain to drum up excitement. Specifically, Marx Realty has introduced house cars to properties both within D.C. and New York. The company has brought a Porsche Taycan to Manhattan’s 10 Grand Central and plans a Tesla Model Y for Washington’s The Herald Building. Such additions will hopefully attract more employees to these properties and entice them to do their best work on-site.

Taking another play from the luxury handbook, Carr Properties has shifted gears not to vehicles but to design upgrades. The company has adopted a multifaceted approach to hotel-worthy hospitality, in which interior design, amenities, rooftops and the like collectively create a desirable experience. To yield the best results, Carr Properties even hired hotel executives from Marriott and Hilton.

“In terms of the return to work, we are also doing everything we can, from events in our buildings, free coffee, bringing in speakers, etc.,” said Carr. “But, at the end of the day, there’s only so much that we can do. It’s ultimately the responsibility of companies to make the decision to bring their people back.”

Bringing tenants back to the office doesn’t benefit just the individual company or property owner; rather, it works in the interests of D.C. at large. Washington, D.C., is facing a huge challenge in terms of office valuations that will crimp property taxes and impact the revenue of local retailers and restaurants, said Carr.

The return-to-office debate therefore goes deeper than workplace flexibility. Remote and hybrid models inadvertently can — and have — negatively impacted downtowns. To overturn this economic detriment, landlords and developers must do their part to attract tenants. It is incumbent upon the city and the government to have people in the office, said Deitelzweig.

To incentivize their workers, companies have invested in creative and attractive solutions. Monday Properties, for example, developed a customized tenant amenity app, Monday Plus, as well as a virtual reality touring portal, Monday VR. Such tools have contributed to a rise in return to office throughout Monday Properties’ Arlington, Va., buildings, which peaked at more than 75 percent occupancy, said Burns.

Clearly, the pandemic has changed many facets of physical office space, as well as corresponding mindsets. Yet, while fewer employees are sharing a space at any given time, office tenants aren’t necessarily looking to downsize their facilities.

“What we’re seeing is tenants think they want less space,” said Deitelzweig. “And, when they actually start designing their space and they want more conference rooms and more collaboration and larger cafe areas and they still want offices, at the end of the day they’re not smaller.”

Rather, new office spaces are all about a flight to quality and using spaces in new — not necessarily contracted — ways. Due to the sheer number of options on the market, firms have to make their properties memorable however they can. Block refers to Meridian’s amenity focus as the “The Meridian Moment,” while Carr dubbed the effect the “Carr Capture.” Essentially, every company has its own metric for making a property stand out and appeal to tenant wish lists.

“Efficiency is key, but people are willing to pay for quality,” summarized Burns.

Making a decision is therefore about appealing to tenant behavior and predicting how people will engage with a certain space.

“What we really fight for is people’s time,” said Fluhr, “and where they’re going to spend their leisure time.”

Since the pandemic, people’s lifestyles and mindsets about work have changed, leading to new ideas about where they can live. More and more people have opted to move away from cities, while others have chosen to remain proximal, thanks to the amenities and cultural experiences urban areas offer. According to Fluhr, urban proximity has remained a trend throughout major cities; people want to live relatively close to metropolitan areas and retain access to those areas’ offerings during their downtime.

This demand overlaps with the idea of the 15-minute city: a trend where neighborhoods evolve into self-sustaining ecosystems that offer residents everything they need for a work-live-play environment, all within 15 minutes of their homes.

“As a general rule, even downtown, [D.C. is] a very bikeable city,” said Malech, noting that the DMV is primed for 15-minute cities. “A very walkable city. We have a very clean Metro when it works. Our commutes are easier.”

Washington’s blend of uses attracts and retains its populations, priming the region for effective place-making. The region has established itself as a self-sufficient urban hub, replete with various cultural options — hello, free museums — easily accessible transit and the like.

However, D.C. also has longstanding ties to politics — an association that has crafted an image of the city and its region. Malech posed the question of whether D.C. must account for its political perception and redefine itself as an urban center independent of any government-induced identity.

“We have the population,” said McGeorge, who enthusiastically challenged D.C. ‘s supposed image issue. “It’s more than 6 million people in the DMV. We have the jobs. We have a super-, super-educated workforce.”

These factors fuel spheres of government, certainly, but also technology, life sciences and other industries. D.C. is a noncyclical economy, McGeorge said, as well as a liquid market that appeals to international investors.