Can a building have a midlife crisis? 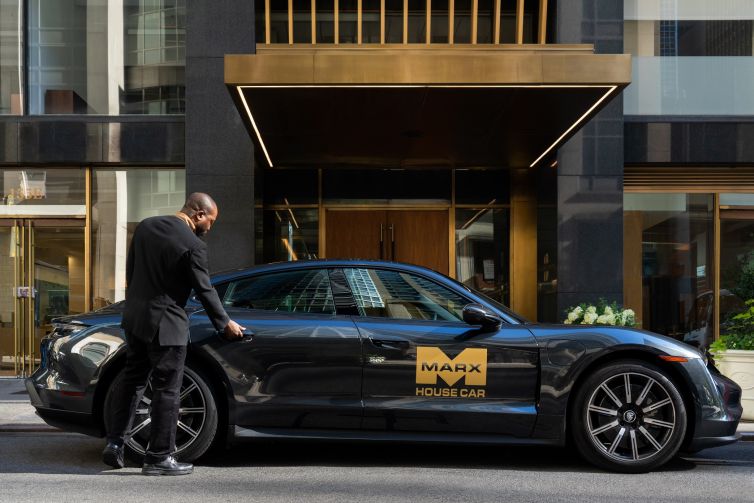 Marx Realty kicked it into high gear with its latest plan to draw tenants to its 10 Grand Central office tower: a Porsche to ferry them around Midtown.

The landlord dropped $100,000 to buy a single electric Porsche Taycan, emblazoned with Marx Realty’s logo and named the “Marx Mobile.” The building’s 20-or-so office tenants can get a driver to shuttle them around Midtown gratis in the sports car, but only from Eighth Avenue to the East River and from 14th to 65th streets.

“When I think of all the amenities we have, this one has gotten tenants the most excited,” Marx CEO Craig Deitelzweig said. “We’ve actually had tenants take photos of the Marx Mobile.”

The service launched this week with just one 10 Grand tenant requesting the Porsche’s services and Deitelzweig picking up two prospective renters in the vehicle for tours.

The car has room for only four passengers, plus a chauffeur, which might result in some stiff competition for a drive given the roughly 1,200 people who work out of Marx’s 35-story building.

Deitelzweig said he would expand the service if it became popular. In the meantime, tenants can rent the pricey sports car on a first-come, first-serve basis for 40-minute intervals through Marx’s in-house property app. And no, office users won’t see their rent go up as a result, Deitelzweig said.

Marx plans to offer the service at The Herald Building in Washington, D.C., with a $80,000 Tesla Model Y, though Deitelzweig isn’t quite sure when it will launch because manufacturing delays have slowed Tesla’s delivery times. Both automobiles are fully electric, and Marx will charge the Tesla at its 1307 New York Avenue property in D.C., and the Porsche at a nearby garage at 45th Street and Third Avenue.

As more and more firms ditch pricey office space to save money after years of hybrid work, landlords and companies have been dropping cash on amenities to lure back office workers, turning to high-end chefs, Peloton bikes, outdoor terraces, doggie day care centers and even rooftop beehives.

A car service is nothing new for some owners, though most generally opt for more practical options like a shuttle bus. RXR partnered with HQ Shuttles in March to pick up and drop off tenants at its Starrett-Lehigh Building from various spots around Manhattan, including the Port Authority Bus Terminal and Penn Station.

Goldman Sachs and Citibank also offered employees private shuttles last year, though Goldman scrapped the free rides in April. Citibank, however, expanded its service in late 2021 during an uptick in COVID-19 cases and heightened concerns about crime in the city’s subway system, the New York Post reported.

Deitelzweig said crime had nothing to do with his decision to buy a Porsche for the building, nor was an office car a specific ask from any of 10 Grand’s tenants. Instead, he said the service is meant to make the property feel more like a hotel than an office.

“[Hospitality] starts at the front door. We’ve always said that, and now there will literally be a car at the front door,” Deitelzweig said. “I think it’s something that’s getting people excited about coming to work.”

Even without the luxury rides, tenants at 10 Grand — which include online news magazine The Week, Dwayne “The Rock” Johnson’s company Seven Bucks Productions, and insurance firm MassMutual — have been flooding in, with occupancy rates in the building between 80 and 90 percent in the second week of September, Deitelzweig said.