Analysts say restaurant chains are surviving the pandemic, in part, through focusing on neighborhoods that aren’t as dependent on office workers 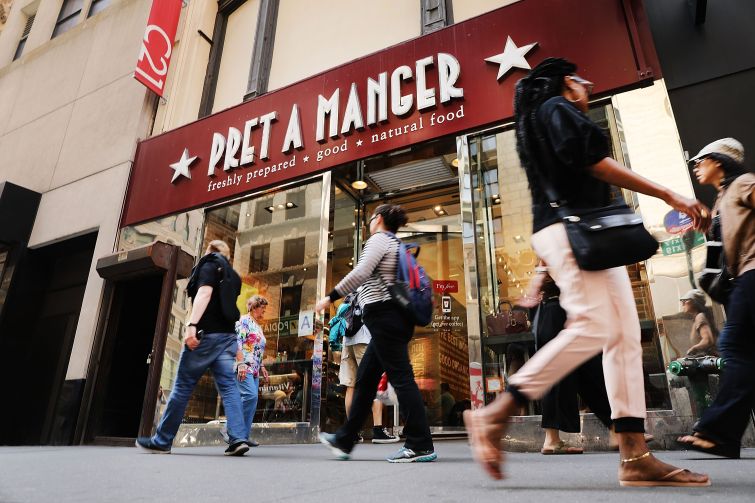 Potential customers move in front of a Pret A Manger in Lower Manhattan in May. Photo by Spencer Platt/Getty Images

You don’t win friends with salad. Sure. But, the pandemic has taught a lesson or two to salad makers and other fast-casual restaurants in Manhattan’s business districts, forcing them to adapt to the office worker exodus by seeking out new customers and exploring new geographies.

When COVID-19 hit New York City in March 2020, Manhattan’s business centers essentially shut down. People stopped going to the office, and, by and large, they have stayed away. As of the end of May of this year, just 12 percent of Manhattan office workers had returned to their desks, according to a Partnership for New York City survey. (One notable outlier: the real estate business, where 70 percent of employees have returned to the office. Talk about being the change you want to see in the world.)

The emptying out of the city’s offices has rippled throughout its economy, affecting all manner of outfits: drug stores, shoe repair shops, bank branches … Perhaps no sector has been more strongly impacted, though, than brick-and-mortar eateries aimed at the office crowd.

At the end of 2020, think tank Center for an Urban Future put out its annual “State of the Chains” report, looking at national retailers in New York City. The report found that more than 1,000 chain stores closed throughout the city in 2020, making for a 13 percent decline in stores. This, the authors noted, was “by far the largest year-over-year decline” since the center began producing the report 13 years ago.

Fast-casual restaurants in Manhattan office districts were among the hardest hit, said Eli Dvorkin, editorial and policy director at the center.

“The bottom fell out of the fast-casual market last year, with the steepest losses clustered in Midtown,” he said. “That is unsurprising, given the double-whammy of hardly anyone being in the office and there being millions [of] fewer tourists.”

Restaurants in Manhattan’s commercial districts “have done no business” for much of the pandemic, said Gary Trock, senior vice president at CBRE Retail Leasing. Many of these establishments have remained closed, even as other parts of the city return to life, he added. “Your conventional office stuff isn’t really open yet. It isn’t really there.”

How many of those closures become permanent remains an open question.

“I’m suspicious of those restaurants that are still closed, but say they are reopening in September or January,” said Jacqueline Klinger, vice president and partner at SCG Retail. “I wouldn’t be surprised if some of them don’t reopen.”

Even so, the fast-casual spot hasn’t been immune to the disappearance of the office crowd. In October 2020, the company cut its corporate headcount by 20 percent, with CEO Jonathan Neman citing in a note to employees the slower-than-expected return of workers to the office as a significant headwind. Last month, Sweetgreen filed confidentially with the Securities and Exchange Commission for an initial public offering.

With the office scene wiped out, successful outfits have survived by turning their attention to more residential areas where business is booming, Klinger said.

“Companies have expanded in a way now, where they are not just doing five-day locations,” she said. “They are doing a lot of neighborhood-y locations that have other drivers, whether it is hospitals or students … and those neighborhood locations have actually performed fairly well over the past year. Look at Second Avenue on the Upper East Side. It’s never looked so good.”

“On the Upper East Side, for every listing we’ve had — even during the height of the quarantine and the shutdown — we would be getting four or five offers for each space, because the residents are still there,” said James Famularo, president of retail leasing at Meridian Capital Group. This is in contrast to areas like Times Square and the Financial District, he noted.

“Second Avenue, you can’t find a restaurant space,” said Trock, noting that Lexington and First avenues were similarly in demand.

CBRE’s second-quarter Manhattan retail report likewise indicates an accelerating restaurant leasing market. Food and beverage saw 23 deals close in Q2, the most of any segment. Those 23 deals comprised 83,000 square feet of space, which, the report notes, accounts for roughly 34 percent of all the retail space rented in Manhattan during the quarter. Much of this space was outside the city’s office neighborhoods, though.

The need to move beyond the office market has favored those businesses with the wherewithal to make that shift.

“Places that are franchised, where they can say, ‘OK, well, these six of our restaurants are doing fine and here is why, and these four are dying and here is why,’ they have enough data and are sophisticated enough to say, ‘OK, people need sandwiches, but they don’t need them in these zip codes,’” said consultant Kate Newlin. “They can negotiate in aggregate with landlords and be able to say, ‘We’re letting go of this space, but what have you got over here?’”

“In some cases, fast-casual chains have been able to raise money over the course [of the pandemic], to raise growth capital to be able to pivot and rebound,” Dvorkin of the Center for an Urban Future noted. For instance, Crain’s New York Business recently reported that Manhattan-based, fast-casual chain Just Salad has raised $20 million, which it plans to use to fund the opening of some 40 stores in the next two years.

“Fewer small businesses were able to withstand a year-plus of revenues that were 50 percent of where they were the year before the pandemic,” he said. “I think some of the fast-casual chains have done a good job of being able to pivot and focus on specific submarkets where there was still demand. But, for the most part, mom-and-pops slipped further into the hole, and that means not just back rent, but utilities, insurance and other things, to where it just became harder and harder to imagine being able to ever generate enough revenue to dig back out.”

“The mom-and-pop guys, I think, will have a lot of difficulty getting back into the swing of things,” CBRE’s Trock said, though he noted that, in some cases, federal stimulus payments could help carry them through.

If the Partnership for New York City’s survey is to be believed, Manhattan office occupancy should rebound somewhat in the near future. Employers said they expect 62 percent of their employees to be back in the office by the end of September, but many of them only for three days a week. Combine that with the fact that rents in neighborhoods like Times Square are down by double-digits year over year, and it seems opportunity is there for restaurants looking to re-enter the office scene.

“Many feel they can get in below market, because they feel the market isn’t hot,” Famularo said, though he suggested that competition for space is on the upswing.

Klinger said that while there remains a fair amount of vacancy in office markets, top-notch spaces — “what have, historically, been the best locations” — are still hard to come by.

“For, sort of, B locations, there is definitely vacancy, but none of my people want to go there,” she said.