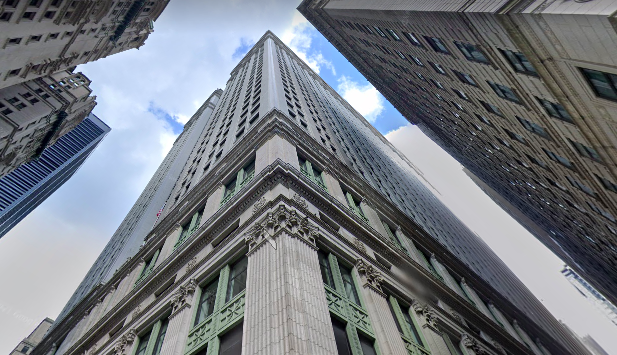 Silverstein Properties announced that the company has finalized eight lease deals at 120 Broadway in the Financial District, known as the Equitable Building, which has undergone a $52 million restoration in recent years.

These leases represent up to 145,000 square feet in the 1915 building and include November 2021’s deal for the parent company of BarkBox, The Original BARK Company, taking 52,000 square feet on the 12th floor.

“Each of these companies chose 120 Broadway as their home for different reasons,” Harlan Strader, vice president of leasing at Silverstein Properties, said in a statement. “The one thing they all have in common is access to an amenity program unlike anything else in the city. Not just the Bankers Club and Inspire lounge in this building, but amenity spaces in all our North American office buildings, including cafes, cocktail bars, terraces, event spaces, yoga studios, wellness rooms, conferencing, mothering rooms and more.”

The largest of the new deals  is the Brennan Center for Justice, a nonpartisan law and policy institute, expanding from its current 24,409 square feet in the property to 49,885 square feet, according to Silverstein. Stephen Eynon from CBRE represented the Brennan Center while Silverstein handled it in-house via Joseph Artusa and Strader. Asking rent was in the mid-$60s per square foot.

On the retail end, steakhouse The Capital Grille, which has occupied three floors in the building since 2008, renewed its 12,559-square-foot lease. It’s unclear which brokerage, if any, steered negotiations for the restaurant.

Kasirer, the eponymous firm owned by one of the city’s top lobbyists, Suri Kasirer, signed a lease for 11,035 square feet and has already relocated from its former offices at 321 Broadway. It’s unknown who represented Kasirer in the deal.

Rothesay Asset Management US signed a lease for 8,039 square feet and will relocate from the undisclosed location of its first Manhattan office, where it has been since 2017, by this summer. Reid Longley of Colliers, who declined to comment, negotiated the deal on Rothesay’s behalf.

Real estate investment firm The Domain Companies signed on for 7,434 square feet with plans to relocate from 11 Park Place this summer, according to Silverstein. Corey Abdo and David Scher of Lee & Associates NYC, who declined to comment, negotiated the deal for Domain.

After 41 years in the building, U.S. Securities will be remaining in place, having renewed its lease for 1,710 square feet.

Silverstein did not disclose the lengths of these leases.