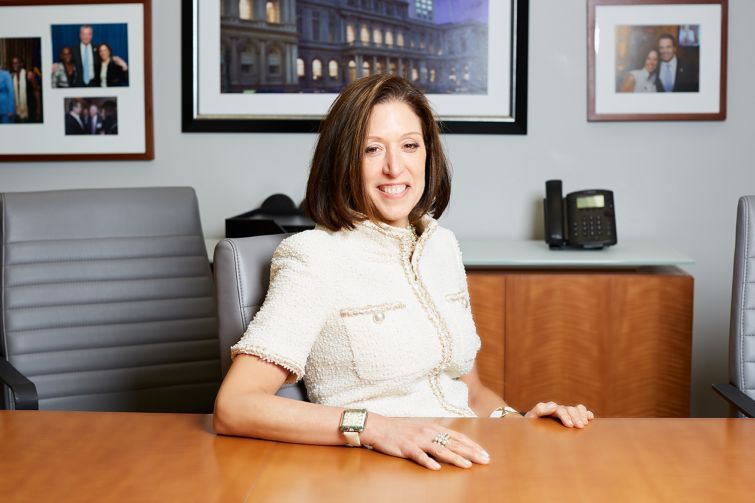 Suri Kasirer is one of the city's top lobbyists and has helped projects like Cornell Tech on Roosevelt Island, One Vanderbilt and the revamp of the South Street Seaport get across the finish line. Photo: Yvonne Albinowski/For Commercial Observer

New York’s political climate has had plenty of shakeups in the past few years with even more set to come next year, making the job of a lobbyist — especially one who works in real estate — tougher.

Between Amazon leaving (and then coming back), rent reform, an ultra-progressive class of Democratic politicians descending on Albany, and 35 City Council incumbents about to be term-limited out of City Hall, New York has a wild west feel.

But Suri Kasirer, president of the eponymous lobbying firm considered one of the top in the city, is up for the challenge and has been working with clients to adjust their message in this new world.

“I’m trying to explain to clients [that] the political climate today is very, very different,” she said. “The priority is not the city getting the most it can in tax revenue. The priority is the protection of people who don’t have [resources].”

Kasirer, 60, was born in Queens and graduated from Yeshiva University. When she was in college, she traveled to the former Soviet Union to help refuseniks — Soviet Jews forbidden from emigrating to Israel — get out of the county. It was that experience — raising money and meeting with politicians to help — that set her on the path to becoming a lobbyist.

She later worked as a special assistant to then-Governor Mario Cuomo and in 1997 founded the Kasirer lobbying firm out of her Upper West Side studio apartment. (She still lives in the neighborhood with her husband — former Rudy Giuliani aide Bruce Teitelbaum — and three children. Despite coming from opposite ends of the political spectrum, the two have been married since 1997.)

Kasirer’s firm raked in more than $11.4 million in 2017 and Kasirer was ranked the 25th most powerful figure in New York politics by City & State magazine last year.

During her career, she helped Cornell University win the right to build a tech campus on Roosevelt Island, lobbied for Howard Hughes Corp. on its revamp of the South Street Seaport and worked with the Committee for Ranked Choice Voting NYC to get ranked-choice voting passed in November. Her firm’s real estate clients include SL Green Realty Corp., RXR Realty and Brookfield Property Partners.

Commercial Observer sat down with Kasirer in her office near City Hall to talk about lobbying in the new political climate.

Commercial Observer: How have you been changing your tactics in this new political climate, where you have some elected officials saying they don’t want to meet with lobbyists ever?

Suri Kasirer: You actually don’t have a lot of elected officials saying that. I feel like most elected officials, pretty much all of them, understand the value that we bring to the table. I think many of them understand that you’re doing a lot of the legwork for them. You’re going to educate your clients. For example, I would make sure that my clients don’t say anything that’s not legal. [Like,] “Oh, why don’t I take you out to lunch and then tell you more about my project?” No, that’s illegal you’re not allowed to do that.

Well, with these new political dynamics have your tactics had to change at all?

I think whenever you’re going into a community you always have to an understanding of what’s important in that neighborhood and what’s important to those elected officials in that community in order to be able to come up with a strategy that works. So that’s always been my philosophy. And I think every administration has a different lens [through] which they make their decisions. The Bloomberg administration was very different than the de Blasio administration. So, if somebody was coming to me to go into Bed-Stuy [with] 100 percent market-rate apartments, I would probably say [that’s] probably not the right project right now. We’ve even had people come up to us with projects that don’t have low enough AMIs [Average Median Incomes, used to determine cut-offs for who’s eligible for affordable housing in new projects] to meet the requirements — this is pre-MIH [Mandatory Inclusionary Housing, which requires developers to set aside affordable units in new projects] — and we’ve turned them down, saying, “Look, these are good projects but we’re not going to be able to get something done in a timeframe that makes sense for you.”

I think it’s smart to figure out, what are the chances of success? Even if you have the best strategy and put together all the right stakeholders and really communicate really well, sometimes the political climate is so far against you it’s hard to break through.

The past years have been rough for the real estate industry. The rent reforms were passed; the Amazon deal was killed. How have you been handling it and what’s the future going to look like?

We’re very lucky that we have a [Council] Speaker [Corey Johnson] that so far has been super supportive of all the ULURPs [Uniform Land Use Review Procedure, which developers are required to go through to build projects different than the zoning allows] that have gone through the City Council and has worked super hard with the developers, with the councilmembers to figure out what it’s going to take to get to yes. We have not had a failed ULURP in the City Council under Corey Johnson. [Kasirer has ties to Johnson and one of her firm’s vice presidents, Jason Goldman, became Johnson’s deputy chief of staff in 2018.] I think he’s been really terrific, and I really applaud him for that. It’s harder and harder to do that; he’s navigating a very tough one right now with Industry City.

It’s been a couple of months now — how have your clients reacted to the rent reform changes?

It’s a very troubling area, because if you don’t give any incentives to developers to improve the physical quality of the living conditions of poor people who can’t afford to have their rent raised and can’t afford to go anywhere else, you’re really forcing people to live in very bad conditions. It’s a real problem: Why would anybody want to put money into improvements if they can’t recoup any money?

What do you think was the disconnect lobbyists and legislators?

An elected official said to me yesterday, “These people are making plenty of money.” I think the issue is that landlords have become synonymous with the bad guys. Most of the developers in this town are people who are civically engaged, super philanthropic. They’re the lifeblood of the city and they care about the city; they’re leaders in the city, and it’s of concern that they’re really being vilified, and the assumption just is that they’re bad guys. They’re major employers and they’re major contributors to the civic and cultural life in this city. We’ve got to figure out how to change that equation.

De Blasio has been considering a hotel permit [which would require a public review process before a new hotel is built.] How do you think that’s going to affect hotel development in the city?

First, let me just say that the hotels are incredibly challenged right now. Property taxes are one of the biggest issues that affect real estate all across the board. The taxes are so high, there are so many businesses in real estate that are struggling, but the hotels are disproportionately affected. They are [taxed] on their businesses rather than their properties. The cost of doing business right now is so high because of the taxes.

It’s incredible what’s happening with tourism in New York City, but the hotels are not feeling the benefits of that [and the] terrific amount of people visiting New York. In terms of the special permit itself, it could be that in the short-term, the prices will actually go up for a hotel stay because they’ll be a more limited market. But it’s hard to say what the final result is going to be of this. There’s a real divergence of views even amongst hoteliers of whether they support [the permit] or not. It remains to be seen.

Looking ahead at 2021, there’s going to be a big shakeup [thanks to term limits]. What are you thinking it’s going to look like?

I think one of the things we have to keep our eyes out for are all the young people that are so disaffected and so upset about what’s happened federally. I think, depending on where the presidential election goes, you’re going to have a lot of young people in New York that are going to vote. The demographics may change in terms of age. Ranked-choice voting [which lets voters rank up to five candidates instead of voting for only one] … is a really important reform. I believe it will really change the process for a number of reasons. It will force candidates to talk to more people, it will force candidates to talk to people outside of their base, and to really understand what people think.

The way ranked-choice voting is going to work is if you don’t get the majority, which most people don’t, then the number two [candidate] and the number threes are really going to count. I think that it allows people to vote for their conscience and not just who they think is going to win. And it’s much harder to predict the outcome.

Do you have any thoughts on people who are rumored to be throwing their hats in for mayor? [Brooklyn Borough President Eric Adams, the Bronx Borough President Ruben Diaz Jr., Council Speaker Corey Johnson, and Comptroller Scott Stringer are expected to run.]

In your field, there’s a lot to keep track of, a lot going on — how do you avoid potential conflicts of interest or even things that aren’t conflicts but may look like it to the outside world?

We really try to be very careful about it. We talk about it a lot internally and we try to talk to our clients if we feel that there are conflicts and try to be as upfront as we can be. Often times, we’ll put two clients together to talk and we won’t participate in the meeting because we’re not invested in one or the other, we just trust them to work things through. We’ll try to help clients find consensus and sometimes you work around that conflict and create a scenario where everybody is happy. Sometimes conflicts are inevitable, and you have to remove yourself from representation of a client. We try to be very upfront about it and honest about it, which I feel is always the best way to be.