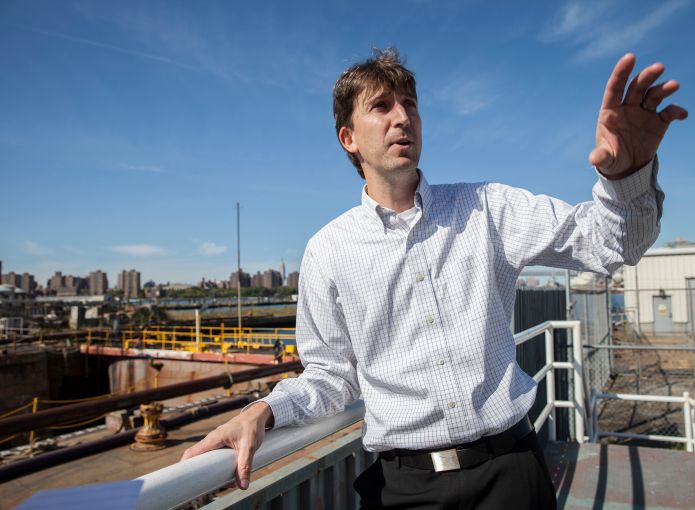 David Ehrenberg at a dock in the Navy Yard. Photo: Lea Rubin Photography

Ehrenberg spent nearly 10 years at the nonprofit private-public partnership organization, bringing about 3 million square feet of new development to the waterfront site and doubling the number of manufacturing jobs in the city, Crain’s reported.

“The Navy Yard has been my second home for the past nine years, and this is a bittersweet moment for me – but I am ready to take on a new challenge,” Ehrenberg said in a statement to Commercial Observer. “Looking back at my tenure, I am perhaps most proud of the diverse, hardworking and compassionate staff I have helped build, and the partnerships we’ve formed.”

He plans to stay at the Navy Yard until March 14. Mayor Eric Adams did not immediately respond to a request for comment on his replacement.

Ehrenberg was first appointed to the post in August 2013 by then-Mayor Michael Bloomberg, and was reappointed a year later by the subsequent mayor, Bill de Blasio. While at the helm of BNYDC, Ehrenberg oversaw a $750 million, 1.8 million-square-foot expansion of the Nav Yard aimed at snagging more technology, advertising, media and information services tenants and the construction of Boston Properties, Rudin Management Company and WeWork’s Dock 72, Commercial Observer reported. The popular grocery store Wegmans also opened its first New York City location during his tenure.

The area has attracted a variety of tenants in the past year, from clean energy startup Amogy, which doubled its space in December, to production companies like Smart Design and Daedalus Design & Production.

“Under David’s inspired leadership, the Navy Yard has experienced over eight years of unprecedented growth, establishing a new model for workforce development and quality job creation in the 21st century,” Hank Gutman, the Navy Yard’s board chair, said in a statement. “We thank David for his brilliant and creative dedication to the Navy Yard’s mission.”

Ehrenberg previously worked for the New York City Economic Development Corporation (EDC), where he was an executive vice president and co-head of the real estate transaction services group for eight years. He managed projects like Cornell’s new tech campus on Roosevelt Island and the redevelopment of the Lower East Side’s Seward Park while at the EDC, CO reported.