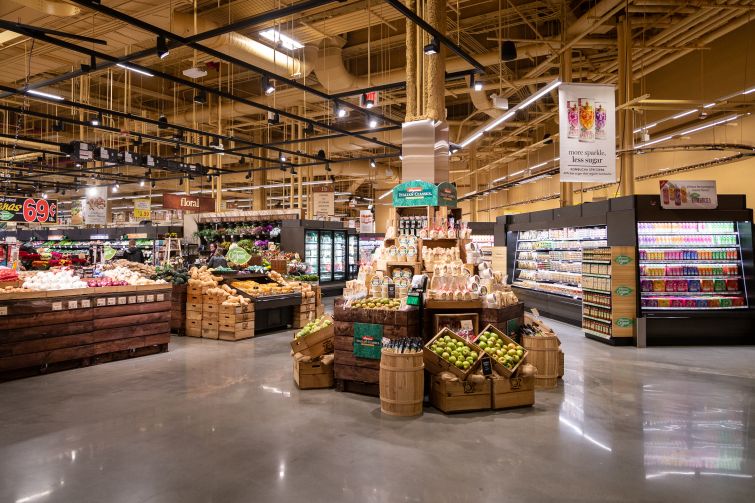 The grand opening of Wegmans in the Brooklyn Navy Yard, marking the grocer’s first store in the New York City area, has made one thing abundantly clear: It has some extremely loyal fans. (Disclaimer: this reporter is one of them!)

For those who have not lived near a Wegmans, which is based in Rochester, N.Y. and has its closest outposts to New York City  in New Jersey, it’s hard to understand why over 25,000 people trekked to the opening on Oct. 27th despite heavy rain and poor nearby public transportation options.

But for “Wegmaniacs” — a term for fans of the grocery chain — the opening was monumental.

Located in the Navy Yard’s southwest corner at 21 Flushing Avenue, Wegmans is the anchor tenant of a five-story, 211,000-square-foot building developed by Doug Steiner of Steiner NYC. Although the project had a bit of a controversial start, as it required tearing down a stretch of 19th-century homes known as Admiral’s Row, plenty of Northeast transplants were happy to overlook this knowing what they would get in return.

On opening day in Brooklyn, cars jammed the surrounding streets and circled the 270-space lot directly outside of the building like vultures, waiting for someone with arms of groceries to head to their vehicle; Wegmans employees signed newcomers up for their frequent shopper benefit program on the sidewalk; and couples took selfies under the shiny new Wegmans logo.

So what’s all the hype about Wegmans? What makes it different from any other grocery store?

If you’re one of the many scratching your head, here are five things you should know about Wegmans that makes it great — and one thing that left even the most loyal fans feeling betrayed by their new Gotham outpost.

1. The term “Grocery Store” is practically an insult

“Wegmans is not a mere grocery store: It’s a grocery retreat — a place of respite,” said a loyal fan who lives in Rochester when asked what makes the store so special. Indeed, nearly every Wegmans fan will tell you that one of the things that makes the store great and creates such a loyal fanbase is the customer experience.

And the grocer also seems to have gotten the memo on experiential retail. The 74,000-square-foot Brooklyn location features a market cafe, a floral shop, a bakery, a cheese shop, and the iconic model train — first introduced to stores in the early 1990s — suspended from the ceiling above the dairy department. While it’s aimed at entertaining children being toted around the store, even the most serious Brooklynite couldn’t help but point up and say: “Look! The train!”

According to an October press release, the Brooklyn location is offering roughly 50,000 items  — with more than 2,000 of those certified organic. Although New York City offers a wide range of grocery stores, Wegmans provides a central location to pick up everything from specialty ingredients to their own line of products, some of which have loyal Trader Joe’s-like followings.

3. The Workers are … Happy (and Altruistic)

Wegmans ranked No. 3 this year on Fortune’s 100 Best Companies to Work For, where it’s been a mainstay for the past two decades. It’s also been recognized by the National Down Syndrome Congress and The National Council on Aging for employing people of all backgrounds.

According to a company representative, 540 people were hired for the opening of the Brooklyn location. At the grand opening, employees were restocking shelves as quickly as they were being emptied while still warmly greeting customers, directing them to what they were looking for or suggesting products they love.

Though it’s no authentic Brooklyn Italian shop, Wegmans does offer a bakery that is pretty unparalleled in the supermarket world. (Forlorn customers outside of New York City are known to rely on Wegmans for the closest thing they can get to a real bagel.) Serving up freshly baked breads, cookies, cakes, pastries and more, it’s hard to walk through the bakery section of any Wegmans without buying something, and opening day was no different. Loaves of bread were being snapped up hot out of the oven, and more than one child was found ogling the cookie display.

Of all that Wegmans has to offer, one of the most widely loved features is the Market Cafe, an eatery with myriad foods available to take out or eat in. Forget about the sad hot buffets or mystery sushi you might find at other grocery stores, Wegmans prides itself on its restaurant-quality foods. (A Wegmans-lover that I spoke to from Buffalo, N.Y., said that he goes there for lunch around three times a week.) The new Brooklyn location has made-to-order pizza and salads, fresh sushi, a coffee shop, a self-service bar featuring Chinese, Thai, Indian, homestyle and vegetarian dishes, as well as a burger bar that even serves the Impossible Burger. The store also offers a mezzanine-level seating area that fits about 100 people as well as a bar serving cocktails, wine and beer.

But … One Sub-Par Decision

Wegmaniacs venturing out in the cold rain on opening day came with empty stomachs and warm hearts full of anticipation for that most beloved of Wegmans features: the sub counter. With fresh-baked breads and delicious deli meats and cheeses, the sub counter offers an exceptional sandwich experience. But those Wegmanics were dismayed — nay, distraught — to find that the new location does not include a sub counter. A store employee pointed to a cooler of pre-packaged subs, which was roundly deemed to be not nearly as magical.

In a tweet by the company (in response to yet another disgruntled fan), Wegmans stated that the lack of a full-service sub shop was due to “space limitations.” Given they had 74,000 square feet of space, the missing sub counter looks like the one thing that the new Brooklyn location got wrong.

But, no need to worry, there’s already a petition on Change.org to correct that oversight.