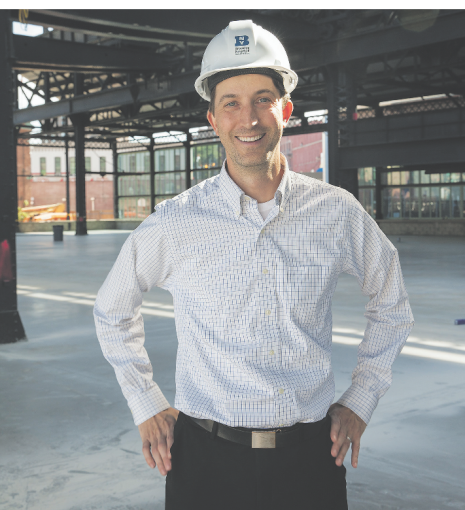 “That creates a level of ownership,” said Mr. Ehrenberg last week as he gave Commercial Observer a tour of the 300-acre waterfront industrial campus that the city owns and the Brooklyn Navy Yard Corporation manages. That sense of ownership is one of the aspects of the job that piqued Mr. Ehrenberg’s interest when he was tapped for the president and chief executive officer positions at the non-profit organization by Mayor Michael Bloomberg in the summer of 2013. He was then reappointed by Mayor Bill de Blasio.

Building 77 is just one part of the 300-acre industrial Brooklyn Navy Yard renovation project that Mr. Ehrenberg, 38, stewards as the captain of the Brooklyn Navy Yard Development Corporation. It also includes the demolition and conversion of the derelict Admiral’s Row into a supermarket and retail complex and tenant Steiner Studios’ plans to convert the old hospital complex into a media campus. Studio head David Steiner is still in negotiations with Brooklyn Navy Yard Corp. to finalize a reported $300 million expansion deal. All told, Steiner Studios will lease and create a 50-acre media campus.

The Brooklyn Navy Yard Development Corporation, or BNYDC, is undergoing the yard’s largest expansion since World War II. It will add more than 1.8 million square feet of new space and 2,500 additional jobs to the park along the East River waterfront.

“David is a tremendously talented, creative and energetic CEO and is off to a great start in his first year on the job,” said Henry Gutman, chair of BNYDC. “It is a challenging time at the Navy Yard, because we have some major new projects in the works as we substantially expand our capacity. Managing the needs of our existing tenants while building new space for additional job-creators is not always easy, but David is up to the task.”

Commercial Observer’s tour commenced at Building 92, the visitor center that opened in 2011 and is accessible to the public. It is also home to the Yard’s employment center, which helps BNYDC achieve the part of its mission that calls for job creation.

Last year, Mr. Ehrenberg boasted, the job office placed 250 people in positions, with an average wage of $12 an hour. Twenty-five percent of the 250 placements were by New York City Housing Authority residents and 15 percent were by the formerly incarcerated.

Mr. Ehrenberg said he is happy in the post, describing it as a “dream job” being able “to do community development with a focus on quality jobs” at such a grand scale in Brooklyn.

Historic details about the yard and its tenants easily rolled off of Mr. Ehrenberg’s tongue over the course of a one-and-a-half-hour combination driving and walking tour.

“I was not a naval history buff before I started here,” he said.

The yard dates back to 1801 and in World War II, at its peak, 70,000 people worked there in ship-related jobs. The federal government decommissioned the yard in 1966 and it fell victim to neglect. By the 1970s and 1980s, there were 800 people working at the yard in the manufacturing business. The city bought the 300-acre site 15 years ago. Today, there are 7,000 people working on site, Mr. Ehrenberg said.

It is home to Kings County Distillery, the first distillery since prohibition; a company that makes sets for Saturday Night Live; the city’s largest privately owned medical testing lab; the two largest printing presses in the state; online flash-sale retailer Gilt Groupe; a publicly accessible rooftop farm; and Steiner Studios, the largest movie and television production center outside of Hollywood.

As a Park Slope kid, Mr. Ehrenberg found himself driving by the yard all the time and upon a couple of occasions was forced to enter it.

“I remember being here twice,” he said. It was the place you “came when your parents were inexplicably mad” because “your car was towed.” The New York Police Department tow pound facility is still on site.

Driving to work is a breeze. He, his wife and their two children, ages three and six, live in the Windsor Terrace neighborhood of Brooklyn.

Mr. Ehrenberg is amazed by all of the development going on at the navy yard, and doubts many locals know much about it.

“Ninety-nine percent of people driving down the [Brooklyn-Queens Expressway] have no idea what’s going on here,” he suspects.

Prior to taking the yard job, Mr. Ehrenberg was at the city’s Economic Development Corporation for about eight years. He was an executive vice president and co-head of the real estate transaction services group. While at EDC, Mr. Ehrenberg was a senior manager on many city economic development projects like Cornell’s new tech campus on Roosevelt Island, the redevelopment of Seward Park on the Lower East Side and the 22-acre Atlantic Yards development project. He also oversaw the operations of the city’s Industrial Development Agency.

Atlantic Yards, renamed Pacific Park Brooklyn, and Brooklyn Navy Yard projects are similar at the core, Mr. Ehrenberg said. They are both private-public partnerships with common issues and concerns.

When then-Mayor Bloomberg appointed Mr. Ehrenberg, Mr. Bloomberg said in a statement: “Building on his many accomplishments at EDC, in which he was a key player in a number of our administration’s economic development priorities, David will no doubt continue to lead the Navy Yard along this impressive path.”

Messrs. Bloomberg and de Blasio have maintained the same goal with the navy yard.

Prior to his gig at the EDC, Mr. Ehrenberg, a Wesleyan University graduate with dual master’s degrees from Princeton University, worked as the coordinator for a microenterprise program at South Brooklyn Legal Services.

“David is scary smart,” said Tucker Reed, the president of the Downtown Brooklyn Partnership, an economic development organization. “His ability to assess a breadth of challenges and opportunities and develop a commonsense strategy to address them is impressive. But it’s the speed at which he seems to do it that sets him apart. He hasn’t been on the job at the Navy Yard very long, but already is developing new ways to approach challengers we have been noodling for a while in the Brooklyn Tech Triangle, related to the creation of additional commercial office space and how that it can complement larger city demands related to infrastructure development and housing needs.”

The environmentally friendly Navy Yard is a component of the tech triangle and BNYDC is one of the three partnership organizations, along with the Downtown Brooklyn Partnership and the DUMBO Improvement District, leading the effort.

The Wallabout-based yard brings in $35 million a year in gross revenue and doles out $25 million on an operational budget, Mr. Ehrenberg said. His salary hovers around $200,000, according to the non-profit’s most recently available annual tax disclosure statement via its website, which is from 2012.

To keep the basic yard operations running, the nonprofit employs 180 people. To put the size of the 300-acre site, which has its own zip code (11205), in perspective, consider that it is more than half the size of Prospect Park and one-third the size of Central Park.

While some say manufacturing has long been dying in New York City, Mr. Ehrenberg said, “Manufacturing is actually stable.”

“The city lost at least 5,000 manufacturing jobs every year from 1997 to 2010, but over the past three years employment in the sector has held steady, with job totals in 2013 the same as in 2010,” according to a March report from Center for an Urban Future.

But between July 2013 and July 2014 in New York State, manufacturing lost 9,200 jobs, more than any other major industry sector, according to August New York Department of Labor statistics.

Mr. Ehrenberg noted that manufacturing jobs are good to invest in as they “tend to be higher quality” and it’s “easier to climb the ladder in manufacturing than in retail or hospitality for the equivalent education levels.”

As the Navy Yard’s current CEO, Mr. Ehrenberg is following in the footsteps of Andrew Kimball, who was in the post for eight years before heading to real estate investment and development firm Jamestown Properties in June 2013. The current chief credits Mr. Kimball with spearheading the development of the yard and putting it back on the map.

“My vision,” Mr. Ehrenberg said, “is on executing projects that have been ongoing and future projects. Everyone would say the Navy Yard is on a good path and I want to continue that legacy.”

“This is a multigenerational project,” he said, noting that there are 20 million square feet of unused Floor Area Ratio, or FAR.

The Navy Yard is becoming a model for other development.

“We’re pretty roundly seen as the national model for how to restore these facilities,” Mr. Ehrenberg said, and, “We now have competition [from] other real estate players creating space for manufacturing.”

Simeon Bankoff, executive director of Historic Districts Council, said like other preservation group heads that he wasn’t familiar with Mr. Ehrenberg. “Andrew Kimball was dynamic. Eric Deutsch [Mr. Kimball’s predecessor] was polarizing. So maybe quiet is good. I haven’t noticed anything in the papers that causes me alarm or that I’m happy about. They just seem to be continuing the good work that the Navy Yard is doing,” said Mr. Bankoff.