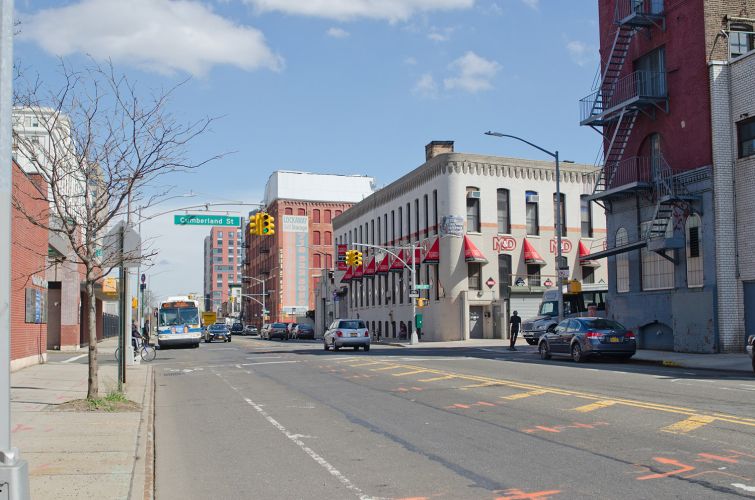 An area once known for governmental “Keep Out” signs is becoming a primary driver for jobs in New York—along with new office space, new retail and new residences—as the Brooklyn Navy Yard and its surrounding area on Flushing Avenue, considered one corner of the borough’s burgeoning Tech Triangle with Dumbo and Downtown Brooklyn comprising the others, continue their expansion.

“We are on a growth trajectory where we will become an integral part of the city’s economy, a central business district in our own right—and, critically, with a slightly different flavor than the other central business districts have,” said David Ehrenberg, the president and chief executive officer of the Brooklyn Navy Yard Development Corporation, which is overseeing the 1.8-million-square-foot, $750 million expansion of the Yard geared toward serving the technology, advertising, media and information services, or TAMI, sector.

“What distinguishes the Yard is its diversity of uses, from manufacturing, to creative, to industrial and design—that provides a real ecosystem that is harder and harder to find in New York City,” Mr. Ehrenberg said.

Mr. Ehrenberg also believes that the massive increase in commercial investment will have a domino effect.

“Pretty big real estate players have started purchasing buildings immediately outside the Yard in order to do versions of what we do—light, industrial, creative and small office spaces,” he said. “Commercial activity begets more commercial activity. We think the more activity there is in the Yard and the more compelling companies locating there, that’s better for the property owners across the street.”

Among the changes is the development of the former Navy ammunition depot Building 77, a 1-million-square-foot building in the midst of a $150 million renovation that will have 16 floors, including a first floor that will feature a food hall anchored by Lower East Side deli institution Russ & Daughters and will be open to the public. Work on the building should be completed by the end of this year with move-ins beginning in 2017, and it will add 3,000 jobs to the area.

So far, the founder of Shiel Medical Laboratory has a lease for floors 10 to 13, and this will be a second location for Russ & Daughters with 14,000 square feet on the first floor for offices, a bakery, shipping facilities and a retail outlet.

“If your business grows to a certain size where you really need manufacturing space, it’s very hard to find a combination of space and value in New York City,” said Niki Russ Federman, a co-owner of Russ & Daughters. “The Navy Yard represented for us an opportunity to maintain a foothold operation within New York that’s important to us not just logistically but in terms of our identity.”

The building is being marketed by JLL with an emphasis on its top two floors, a 140,000-square-foot space they’re calling “The Beacon.”

“When you reimagine Brooklyn the way that it can and probably should be, the Navy Yard and Flushing Avenue are going to be right in the middle of everything,” said Michael Berg, a senior vice president at JLL and co-leader of the company’s Brooklyn leasing initiatives. “The key thing this project has delivered is Flushing Avenue frontage, which will really help activate the street because this building will open right to Flushing Avenue. So you can walk right in and have access to Russ & Daughters and all of the other 50,000 [square] feet of retail on the ground floor.”

Also on its way is Dock 72, a 675,000-square-foot, $380 million co-working space being developed by Boston Properties, Rudin Management Company and WeWork, expected to bring 4,000 living-wage creative and tech employees. WeWork will take 222,000 square feet—about one-third—of the building’s 16-floor space with the rest currently available for rent.

And as Commercial Observer previously reported, the building will include tens of thousands of square feet worth of amenities, including 10,000 square feet outdoors with a basketball court, an open lawn and game tables, a 13,000-square-foot food hall and a 15,000-square-foot health and wellness center (for building tenants only) with a gym, studio rooms, spa treatment rooms and a locker room. The rooftop will feature a conference and event facility. Asking rents will start in the low-$60s per square foot.

“Being able to create a ground-up, Class A office building on the Brooklyn waterfront, which hasn’t been done in decades, was very exciting,” said Michael Rudin, a vice president at Rudin Management.

“We’ve wanted to expand, and we have a master plan to be about 1.6 million square feet on 60 acres, just to fully realize the potential from the site here,” Steiner head Douglas Steiner said. “The reason we located here is because the Navy Yard has 300 acres, and we had the ability to take 60, which is unheard of on the water in New York City.”

Perhaps most exciting for many—and the cornerstone of any area vying to be a neighborhood where people will actually want to live as well as work—will be the addition of popular grocery store Wegman’s to the Yard, part of a $140 million redevelopment of the location’s Admiral’s Row site, which is expected to generate 1,200 jobs. Wegman’s itself will bring as many as 600, including from 150 to 250 full-time positions. Also, the new 250,000-square-foot Green Manufacturing Center will boast tenants including the Brooklyn Roasting Company and Crye Precision Body Armor.

“As we develop, Flushing Avenue becomes a more desirable location because of the amenities and improvements we’re making to the street frontage there,” he said. “Twenty years ago, the Yard was surrounded by barbed wire with big signs saying, ‘Government property, keep out.’ We’ve begun changing that.”

Notable developments underway beyond the Yard include the 700,000-square-foot 47 Hall Street, purchased last year by RXR Realty and Westbrook Partners for technology and creative office space, and two similar projects from Madison Realty Capital: the 200,000-square-foot 29 Ryerson and a three-story office and retail facility at 256 Flushing Avenue. (According to CoStar Group, most of the rents in this submarket are still in the $10- to $14.93-per-square-foot range.)

Acumen Capital Partners has developed a former Pfizer plant at 630 Flushing Avenue, housing 575,000 square feet over eight stories with tenants including Brooklyn Soda Works, Cooper-Hewitt and Pratt Institute’s Brooklyn Fashion and Design Accelerator. (Rents there are a little more expensive, starting at $19 and going up as far as $40 per square foot.)

On the residential side, the $146 million Navy Green housing development across from the Yard, bordered by Flushing and Park Avenues and Clermont and Vanderbilt Avenues, will offer townhouses, condominium units and 30,000 square feet of green space.

Mr. Ehrenberg sees all of this development as combining to make Flushing Avenue a primary driver of jobs and industry in New York City.

“I totally think Flushing Avenue could become a real thoroughfare and destination because of the density of jobs in the coming years,” he said. “We’ll [get] at least 15,000 jobs. That will make Flushing a compelling street no matter what.”