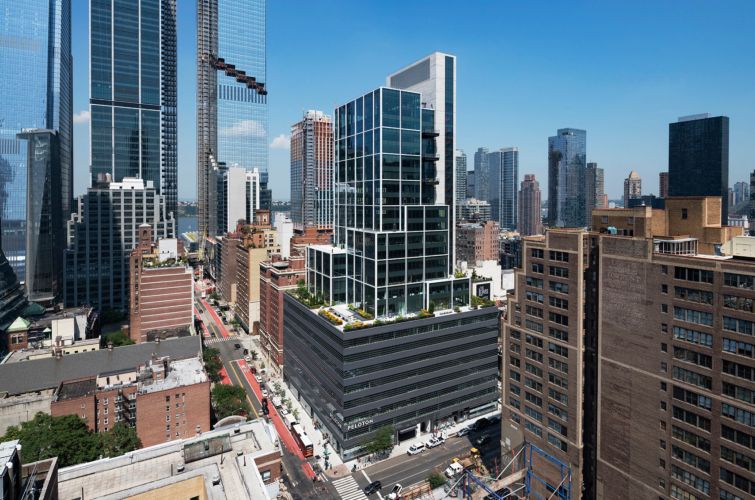 In Commercial Observer’s annual rundown this month of the year’s biggest New York City investment sales, we wrote that there would not be any such sales of at least $1 billion in 2021, just like in 2020.

The 25-story, 697,958-square-foot office and retail building at 441 Ninth Avenue, known as Hudson Commons, closed on Dec. 17 for $1.033 billion. It is the largest New York City investment sale by dollar volume since 2019, according to data provider PropertyShark and city records.

A CBRE team led by Darcy Stacom and Bill Shanahan, and including Doug Middleton and Alana Bassen, brokered the deal. The team started marketing 441 Ninth in September, and it went to contract in November — a fairly fast turnaround, especially given the challenges with which the pandemic has saddled New York’s office market, including high vacancy rates, lots of sublease space, and the endurance of remote work.

There was competition nonetheless, Stacom said.

“We had international, ultra-high-net worth families, and institutional as well,” she said of investors who vied for 441 Ninth.

The building’s repositioning probably set it on its billion-dollar course. The property ended up checking basically every box on the modern real estate wish list, including in terms of sustainability, amenities and wellness.

Cove and Baupost bought the address four years ago this month for $330 million. It was then an eight-story building that began life in the early 1960s as a storage warehouse and that developer Harry Macklowe converted to office in the 1980s. The new owners built a 17-story, glass-and-steel addition, and spent at least the purchase amount repositioning it as a hotel-like office building complete with a concierge with a background in hotels and restaurants rather than property management, bowls of complimentary fruit in the lobby and amenities space, and signature scents for the common areas (it’s pine right now for the holidays). There are even bespoke events that Hudson Commons’ tenants can book through said concierge.

The building features 14 outdoor terraces on 14 floors as well as an emphasis on air filtration and touchless technology, including app-based registration for visitors — all health-conscious features especially in vogue amid the pandemic. “We didn’t have to do much retrofitting,” Amit Patel, a Cove partner and its chief operating officer, said of changes at 441 Ninth due to COVID. “The one thing we did is add bipolar ionization filtration within the lobby and common areas.” (Architecture firm KPF designed the tower addition as well as oversaw the renovation of the existing building; and handled the lobby and amenity space design.) 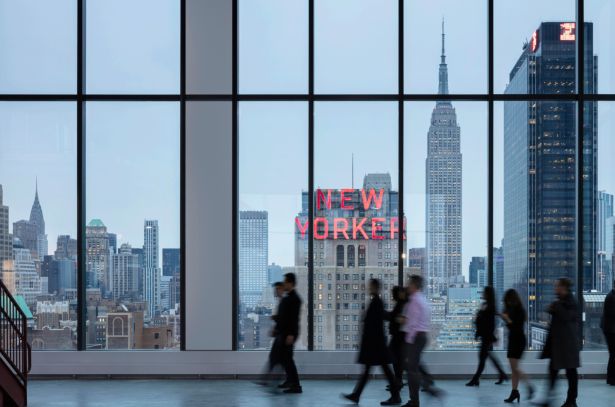 The building is also one of a handful of office properties in New York to achieve LEED Platinum certification for sustainability from the U.S. Green Building Council. Such an accolade resonates particularly loudly with office tenants that, more and more, want to be seen — by their employees and the public — as environmentally friendly.

In many ways, then, the owners of Hudson Commons anticipated the trajectory of a lot of commodity space in New York, as developers started racing to transform it into more desirable — and remunerative — Class A office space.

This is especially common in a post-COVID landscape where office owners have to provide reasons for workers to come in beyond the usual. Such an amenities-heavy, hospitality approach also gives owners an advantage when trying to attract companies, more of which are using the workplace as a tool for recruitment and retention.

“Going forward, we feel that office as a product class wants to be a little bit of a cultural standard bearer,” said Kevin Hoo, Cove’s managing partner. “If there is no incentive for companies to recruit and maintain their talent on site because you’re not providing a space which is aspirational — it’s better than what [workers] have at home — then it’s going to be difficult.”

The last $1 billion investment sale in New York City was barely a block from 441 Ninth. WarnerMedia sold its office condos at 30 Hudson Yards to an affiliate of the Related Companies for $2.2 billion. That deal, which involved WarnerMedia leasing the space back, closed in June 2019.

Next year will be different. Already, Google‘s $2.1 billion takeover of Manhattan’s St. John’s Terminal is queued up to close after New Year’s. The general investment sales velocity has picked up, too, in the latter half of 2021. And Blackstone is reportedly close to buying a 49 percent stake in One Manhattan West for $2.85 billion; that sale would close next year too. More deals are getting done now than in the pre-vaccination depths of COVID in 2020.

As for 441 Ninth, CBRE’s Stacom saw the sale coming. Incidentally, she had helped broker the 2016 trade to Cove and Baupost, and she brokered SL Green Realty Corp.‘s $953 million sale of nearby 410 10th Avenue in late 2020. She said she had a feeling 441 Ninth would capture investor interest.

“When we launched this marketing, I compared it to the GM Building of the future and a lot of people laughed at me,” Stacom said (she brokered the $2.9 billion sale of the GM Building at 767 Fifth Avenue in 2008, then the largest office building trade in U.S. history). “Once they came and saw the real estate, they were like, ‘I get it, I really get it.'”