New York developers are hedging their bets on outdoor spaces — yes, even in winter — continuing a long trend 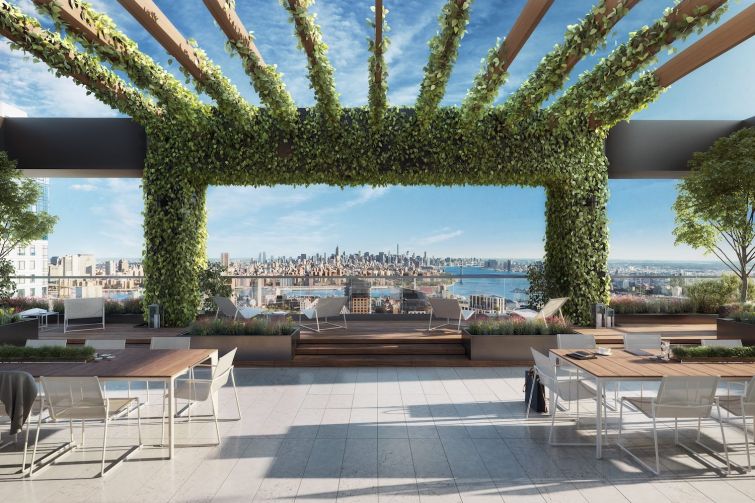 A terrace at One Willoughby Square, a new office tower in downtown Brooklyn. Photo: FXCollaborative

It started as a nice amenity to have and, as time has marched on, it has become a must-have.

These days, you almost can’t build an office building without including some outdoor space for people to relax on, to work on, or from which to just see the world differently. And, as COVID increasingly causes people to question why spend so much time in the car or on the train when you can be just as productive on your laptop at your kitchen table, with the delta variant out there and the odds of getting sick dwindling the more time you spend outdoors, outdoor terraces make more sense than ever.

“We’ve been involved in office space and building design, and the evolution of office buildings, for 40 years,” said Dan Kaplan, a senior partner at the architecture firm FXCollaborative and designer of One Willoughby Square, a new office tower in Downtown Brooklyn. “And, over the last 10 to 12 years, the demand for exterior space in office buildings has grown, and, with the pandemic, it has really exploded.”

It’s part and parcel of a bigger picture. Developers and landlords have spent fortunes to build state-of-the-art workspaces in the belief that work was work, and home was home, and there was an impregnable barrier between the two. Now, that distinction has blurred, and real estate people need to do their utmost to be sure that folks would prefer to be in the office more than at home.

Hence a pile of amenities that began with the advent of laptops, like food and beverage spaces, rooms to play in and to blow off steam, gyms and fitness and wellness centers built into the workspace, and not least of these is outdoor terraces.

In late 2019, before the pandemic hit, commercial real estate brokerage CBRE did a survey and found that of 10 office buildings under construction in Manhattan, nine had outdoor space. Eighteen of the 24 buildings built in the 2010s also had outdoor space. The trend was particularly visible in new construction in Midtown South, a hotbed for young technology and creative companies, the study said.

Michael Slattery, associate CBRE field research director, New York tri-state region, who co-wrote the study with Nicole LaRusso, CBRE senior director of research and analysis for the Northeast, said the trend has continued since the study.

“Not only have we seen new construction come forth over the last little bit, with the focus on differentiating themselves in a very large market, but a top-class building has all the amenities these tenants are looking for, and green space, outdoor space, is definitely near the top of that list,” Slattery said. “There are plenty of great buildings that are older and vintage, and might not have the ability to activate terraces to provide outdoor space, but this is a place where all owners and landlords are looking to set themselves apart.”

One architecture firm that has ridden this wave is Duda|Paine Architects of Durham, N.C. It specializes in creating buildings where, in the words of co-founder Jeffrey Paine, they work toward “a seamless connection between the indoor and the outdoor,” which he called an outgrowth of the firm’s focus on the wellness of individuals who use their spaces. The firm has designed wellness centers at Duke and Emory universities, and is finishing up one at the University of Virginia.

“People don’t like to be holed up,” Paine said. “People want to be able to step outside during the day, even in a high-rise office building.”

Perhaps the most emblematic of the movement toward terraces in offices is The Spiral, rising now in Hudson Yards on Manhattan’s Far West Side. Designed by Bjarke Ingels, arguably the world’s hottest starchitect, the Tishman Speyer project features a spiral of outdoor decks as the skyscraper rises to its 1,005-foot height.

Each of its 65 stories will have its own terrace, which Bjarke Ingels Group partner Kai-Uwe Bergmann called the logical extension of the High Line — the abandoned freight trestle turned urban park that snakes through the lower West Side before terminating around the train yards that give The Spiral’s neighborhood its name.

The idea is to “take this wonderful piece of green-appropriate space, this infrastructure, and take the High Line to the skyline,” Bergmann said. It will be the first Manhattan commercial building with terraces on every single floor. The terraces will be of varying depth, solar orientation and vegetation, he said. The idea is to “bring the greenery inside” so that they “bring biophilic elements” into the workspace, Bergmann said.

Pharmaceutical giant Pfizer, best-known now for being the first to receive Food and Drug Administration approval for its COVID vaccine, agreed in 2018 to move its headquarters to The Spiral, taking about 800,000 square feet in the 2.8 million-square-foot tower. Investment management firm AllianceBernstein agreed the following year to take another 189,000 square feet.

The intention is to make the terraces accessible to employees year-round, Bergmann said, even in winter, though, ultimately, it will be up to tenants to determine the extent of access. Bergmann noted that many New York apartment dwellers have outdoor balconies that they use all year, and he expects the same at The Spiral.

“You can look around in Manhattan and there are plenty of buildings that have outdoor terraces,” he said. “Our hope is that the terraces will still function and offer coworkers a chance to actually get fresh air on the same floor where they have their desks, as opposed to having to travel all the way down to the lobby.”

No, there is no magical way to make an outdoor terrace usable in a New York February, said FXCollaborative’s Kaplan. The best you can do is employ space heaters to make the “shoulder months” like November or April more bearable, he said.

FXCollaborative designed a tower for the German insurer Allianz in Istanbul, Turkey’s biggest city, which included outdoor spaces for a climate he described as “not dissimilar to New York — it snows there, though it doesn’t get as cold.” But, unlike a lot of New York office towers, the building features fully operating windows, allowing users to allow fresh air to enter. He said he expects to see more of this in New York going forward, as an acknowledgement that natural air is healthier than what HVAC systems provide.

The plan for The Spiral was put together well before COVID became a factor, but at a point where outdoor space was becoming a fairly common enticement. It’s not well known, but Rockefeller Center, which dates from the 1920s and which Tishman Speyer also controls today, has activated rooftops on all of its high-rise buildings, Bergmann said — not to mention the famous pedestrian plaza at its base with its Christmas tree and skating rink.

While ground-up projects like The Spiral may have an upper hand, allowing architects like those from Ingels to stretch their imaginations, those working on repositioning older buildings are not sitting out the trend.

“We thought we had the ability to create some really unusual spaces within the property,” Ingerman said, with its arched windows on the second floor, a 17.5-foot ceiling height on the 17th floor, its original top floor, and an opportunity to build two completely new floors. “We thought there was a real opportunity to completely modernize and reimagine this building, and really push it in the way people will be utilizing buildings going forward, with outdoor space and having more amenities in the center of the city.”

The total makeover of the now 19-story building cost $350 million, he said, but he was unable to give a breakdown of what the open-air landscaping cost. Ingerman did call it “an important” part of the project’s overall vision.

“People have realized that having the ability to go outside, and having the ability to integrate that with indoor space, is just a tremendous advantage in this culture of trying to attract and retain new talent,” Ingerman said. “If you’re working 10 to 12 hours a day, take a little pop out to a terrace. Post-pandemic, we now realize we have to lure people back to work. Work should not be a boring environment.”

Tribeca and its partners employed three designers: Studios Architecture, which focused on the overall building renovations that included the two-story penthouse addition; Studio Mai, to redesign the lobby, including the cafe, amenity spaces and courtyard design; and Harrison Green, which landscaped the outdoor spaces. Brooklyn-based Harrison Green, which also designed the Baccarat Hotel in Midtown, is a “high-end green designer,” according to Ingerman.

Another example of where the outdoors are being worked in is at what’s now called 660 Fifth Avenue. Brookfield Properties, one of the world’s largest commercial real estate owners, bought the ground lease in 2018 for the tower formerly known as 666 Fifth Avenue. It then announced a makeover, with architecture firm KPF leading the repositioning work.

“We don’t look at it as something that is optional,” said Callie Haines, Brookfield executive vice president and head of the company’s New York and Boston regions. “Outdoor space is part of a larger amenity-rich package that landlords can be offering.”

The 39-story tower at 660, built in the 1950s, is undergoing a $400 million redevelopment, which will include an entirely new utility system. Like a lot of Manhattan office skyscrapers, it was built with a tall, narrow tower jutting out from a broad base. The Brookfield plan is to take advantage of the base by opening the top of it to tenants, creating an eighth-floor outdoor space. The company also plans to open up ledges on the 10th, 11th and 15th floors. Each tenant will have the opportunity to hire their own designer to finish out the space, and to determine what to do with it in the winter.

In addition to the additions at 660, Brookfield has worked in a variety of outdoor spaces into its Manhattan West development, which is going up just east of Hudson Yards. These Manhattan West spaces will include a skating rink connected with the National Hockey League, one of the tenants at One Manhattan West, at the plaza level.

Duda|Paine Architects’ Paine sees this as a trend that will survive past the pandemic.

“Even past this particular scare, we will continue to have instances where the public health is concerned,” he said. “This will not be the last time we face something like this.”