NYC Has a Lot of Empty Office Space. Does the Industry Appreciate Just How Much? 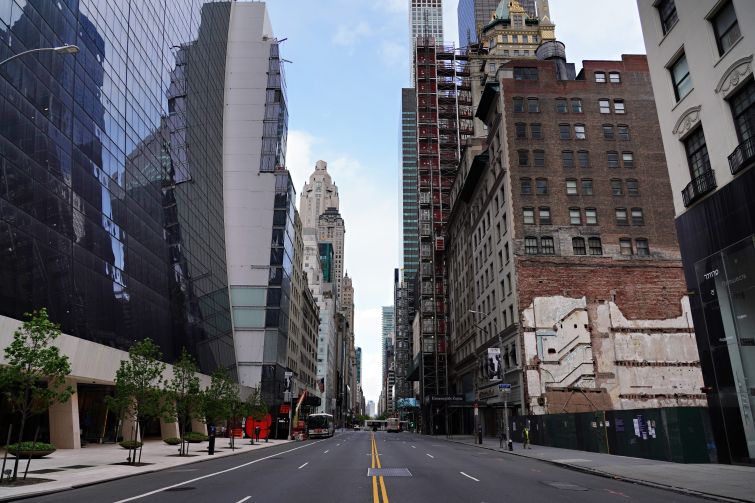 Despite optimistic proclamations from the real estate industry that the end of the pandemic is in sight, New York City’s office market continues to sink to new and unprecedented low points. The office vacancy rate in Manhattan reached 16.3 percent in the first quarter of 2021, up from 11.3 percent a year ago and hitting the highest level reported since 1994, according to Cushman & Wakefield’s most recent data.

The first quarter of 2021 was also the first time the average asking rent for Manhattan office space fell below $73 a square foot since 2018, C&W found. The average dropped for the last two quarters, slipping to just over $72 a square foot.

The amount of office space leased also declined across all three major submarkets, decreasing 25 percent year-over-year in Midtown, 37 percent year-over-year in Midtown South, and a whopping 68 percent downtown. A combination of new construction office buildings coming up for lease, and large tenants moving or shrinking their offices, combined to drag down an already weak office market.

Two large blocks of offices totalling 619,554 square feet hit the market in Midtown, dragging down the absorption rate there to negative 2.2 million square feet. And in Midtown South, developers completed 90,000 square feet of new office at 60 Charlton Street in SoHo and nearly 180,000 square feet at Essex Crossing on the Lower East Side, which pushed up the area’s vacancy rate.

To top it all off, New Yorkers don’t seem keen on returning to the office. New York City office occupancy is at just 13 percent, according to data from Kastle Systems.

The return to work will be shaped not only by how vaccinated people react to new and emerging variants (variants account for nearly half New York’s current COVID cases), but also by how many employees will want to be in the office most weekdays. And some of the city’s biggest tenants, like JPMorgan Chase, have been giving up large blocks of space and telling their employees that the five-day office workweek is a relic.

So when will the Manhattan office market recover? It depends who you ask.

Some folks believe the turnaround will happen this year, as more New Yorkers get vaccinated and wealthy Manhattanites return. The optimist camp believes that September — when city public schools fully reopen and Broadway theaters begin running live shows again — will be the turning point.

“There has been a sentiment shift over the last several weeks that has been undeniable,” said Jonathan Mazur, a senior managing director for national research at Newmark. “That may not lead to activity today, but there have been certain green shoots in the marketplace that suggest a positive turn. There are more tours taking place than there were at any time in 2020, and there are more tenants in the marketplace than there were in 2020.”

Mazur said there were 94 new tenants looking for office space in Manhattan in January 2021, which was higher than it was at the same time in both 2020 and 2019.

Ryan Masiello, co-founder of real estate software company VTS, disagreed. Pointing to data from VTS’ commercial real estate platform, he said that the number of new tenants in the Manhattan market had peaked last month at 46, which was less than half the number of tenants that had been in the market in January 2020. However, that figure was 73 percent higher than it was last summer, when New York entered Phase 3 of its reopening process. Those new tenants are currently seeking 1.2 million square feet of office space, VTS data shows.

One big factor in the recovery, Masiello argued, will be tech companies. Since the pandemic began, few tech firms have been in the market for office space. They represented just 8 percent of the demand for space in terms of square footage, compared to 24 percent pre-pandemic. Financial firms, however, have looked for space even more aggressively, comprising 28 percent of the market, up from 22 percent pre-COVID.

“This 8 percent can massively swing the demand profile in the next 18 months, and it’s just not showing up yet in the data,” Masiello explained.

The average company is also looking for 10 percent less office space than it was before the pandemic. But as companies plan for a long-term future with more employees in the office and more space per worker, Masiello said he felt that firms would likely look for bigger spaces.

He predicted that the office market wouldn’t rebound fully until the end of 2023.

September will be “the first big push” to return to the office, said Masiello, “but it’s going to be a real ramp for most companies to get back to normal. I think if we’re at 40 percent [office] occupancy by the end of the year, that would be a home run for New York.”

Michael Cohen, president of the tri-state region at Colliers International, said that many long-term owners had become more realistic about their expectations and willing to negotiate with tenants as the pandemic has dragged on.

“When I speak to landlords, it’s all about, ‘Yeah I’ve adjusted my expectations and I’m definitely being much more aggressive [about making deals] than I was before COVID,’” Cohen said.

Developers of newer office buildings, on the other hand, might end up waiting a while to make deals if they don’t want to lower their rents.

“If you just built a new building, and you have the finest amenities in the market, you say you’re going to wait for a premium,” Cohen said. “You may be less willing to compromise. But if you’ve had a building for 40 years, and you’re making money hand over fist, the first $50 or $60 of rent is more important than the last $3 or $4.”

The veteran broker and asset manager felt that real estate observers shouldn’t wait for leasing activity to return to where it was pre-pandemic, when it was hitting record highs.

“I wouldn’t define that as recovery,” Cohen said. “That doesn’t seem fair. If you’re going to judge recovery based on those various metrics returning to where they were at the last peak, then who knows when that’s going to occur. Recovery is defined by an orderly trading environment: lots of deals being done, and neither landlord nor tenant has an obvious advantage in the negotiation.”

However, he did share the view that leasing might kick into high gear starting in 2023. Tenants with long-term leases expiring will start looking, along with companies that signed short-term lease extensions during the pandemic, or delayed signing a lease at all in 2020 and 2021.

“All the tenants who had their leases expire in ’21 or ’20 and said, ‘I have no idea how many people are going to be working from home. I don’t want to be the pioneer to figure this out.’ Circumstances conspired for a lot of tenants to kick the can down the road,” Cohen said. “So there’s going to be something like a bunching effect.”