Parking’s Back As an Office Amenity Post-COVID

Spaces for commuters’ cars were becoming more of an afterthought pre-pandemic; now driving has jumped and the scramble’s on to accommodate 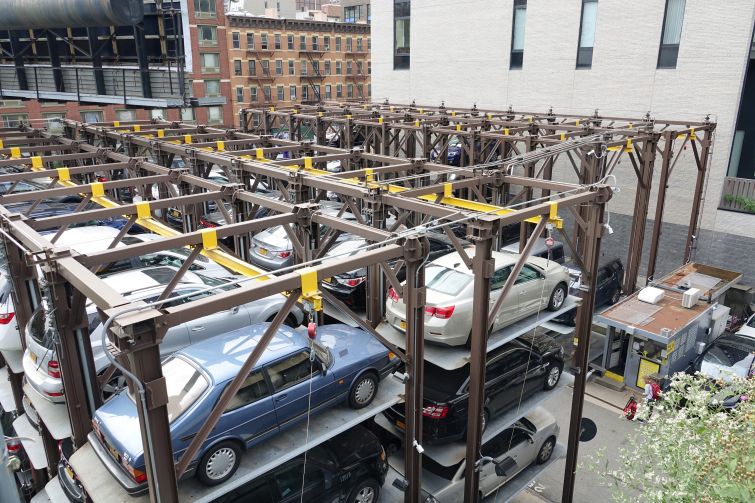 It makes perfect sense. If you’re trying to avoid a contagious disease, drive your own car to work. Even if that stranger on the train or the bus is wearing a mask, as just about all transit systems require, you don’t know their vaccine status, and just to stay on the safe side …

There’s evidence that more and more people are following this logic. The trend creates a conundrum for office owners and their tenants, the companies that employ workers who use the space: Where do you park all of these cars as people trickle back to the office? It’s like parking spaces have become a must-have office amenity along with easily ordered lunch, access to outdoor space and decent air flow.

Before the pandemic, paid parking garages and lots in urban centers — including those that office workers routinely utilized — were on the way out. Ride-hail apps such as Uber and Lyft, the micromobility boom, especially with bikes and office bike rooms and the general draw of the so-called 15-minute city, along with the immense value of these garages and parking lots given their locations, seemed to be seeing them off. Dozens of garages and lots had sold since the middle of the last decade explicitly as redevelopment opportunities for condominiums, offices and other uses, and did not necessarily include parking in their plans.

These included New York-based developer Millennium Partners’ Winthrop Center, a 691-foot-high, mixed-use replacement of Boston’s largest municipally owned parking garage, and Lowe Enterprises and Aecom Capital’s Ivy Station — anchored by entertainment giant WarnerMedia’s offices — that opened this year on an old parking lot near a light-rail stop in Los Angeles County’s Culver City. There have also been major infills via redevelopments in Denver, Chicago and Charlotte (and a few more besides Winthrop Center in Boston).

It looked until March 2020 like more Americans than ever would be training, busing, biking or just simply walking to the office.

Now, though, the statistics point to a surging demand for parking spaces for office-based commuters. Nowhere is this clearer than in the nation’s largest commercial real estate market.

The Port Authority of New York and New Jersey reported on Sept. 28 that interstate bridge and tunnel traffic was close to pre-pandemic volumes, while PATH ridership on the routes that connect New Jersey and New York by train was down 62 percent from August 2019. The Metropolitan Transportation Authority, the state agency that runs New York City’s subway system, reported that subway ridership topped 3.1 million on Sept. 30, a post-pandemic high. It typically carried 5.5 million riders pre-pandemic. MTA bridge and tunnel usage the same day — the agency oversees the Verrazano-Narrows and R.F.K. bridges and the Queens-Midtown Tunnel, among others — was down just 1.8 percent from pre-pandemic levels, according to the agency. About 954,000 used its bridges and tunnels.

Auto use crashed by about 45 percent in March and April 2020, at the beginning of the pandemic, according to the American Automobile Association (AAA). Since then the rate has recovered robustly, but is still nowhere near what it was pre-COVID-19. With the delta variant out there, more of the people returning to work may be using their cars, said Andrew Gross, AAA’s national spokesman (who, incidentally, is working from his Arlington, Va., home and plans to take the D.C. Metro when he does return to the office part-time). But these people are overwhelmed by the numbers still working from home.

New York City says it is not about to relax or reverse its pro-mass-transit, anti-car policies, which have resulted in closing numerous Manhattan streets to motorized vehicles, turning those streets into pedestrian malls, and promulgating a network of bike lanes throughout the borough.

“As we emerge from this pandemic, we cannot afford business as usual in our transportation system,” Scott Gastel, assistant commissioner for the New York City Department of Transportation, said in an email. “People returning to their cars just means gridlock and pollution, which is why we’re continuing to make record investments to improve bus service, expand our bike lane network, and continue the process to implement congestion pricing.”

In New York, parking is notoriously expensive and the city was built on the assumption that a majority of workers would take the subway, commuter train or bus to work. At JLL, which manages more than 739 million square feet of offices across the country, Elizabeth Mitchell, the vice president in charge of process and office project management, is recommending that buildings utilize technology to help meet the needs and expectations of post-COVID building occupants when it comes to parking.

“We saw about a 70 percent decrease in mass transit [use] when COVID first hit,” she said. “And we subsequently saw a decrease in even going into the office. As people have been returning to the office, we’ve seen mass transit numbers pick up, but we proactively wanted to start creating solutions for our clients and our tenants, so buildings could handle the increase in drivers.”

While mass transit ridership is up compared to the depths of the pandemic, driving is up even more, Mitchell said. Creating more parking spaces “is a challenge,” she added, “so it shifts to optimizing space utilization.”

Smart parking solutions, or utilizing app- or computer-based technology to help people find spaces close to their destinations, existed even before COVID, she said, but the virus made adoption more necessary, for things such as “being able to reserve parking ahead of time, [and] being able to check on your phone where parking might be available.”

One example of such technology is Spothero, which offers drivers an opportunity to reserve and pay for a private parking spot ahead of time, often for lower than the retail price posted on the signs at the lot. It says on its website it serves more than 30 cities, including New York, and has parked more than 40 million cars since 2011. Another, FlashParking, provides garage operators with a suite of cloud-based services that allows them to operate more efficiently.

On the last Wednesday in September, Manhattan Plaza, a 998-space garage in Hell’s Kitchen, was charging $33.50 for two hours, according to Parkopedia.com. A 200-spot garage at 350 West 42nd Street run by Icon Parking Systems was charging $56 for two hours.

At Spaces USA, the big innovation was providing drivers with a touchless parking solution. The system is designed to dial a number at both the entry and exit. Many drivers set it up so that they can use Siri or Google Voice. Drivers can also pay in advance via a reservation, but they still dial into the system at the entrance/exit. Dialing the number takes about five seconds. This is faster than queuing a car, rolling a window down and hopefully being able to reach a button or ticket. Most pay-in-lane exit systems take at least one minute to navigate payment.

Jerry Skillett, executive chairman and co-founder of Spaces who said he has been in the parking business for 40 years and has run “thousands” of parking facilities, says it was just “a happy coincidence” that the company’s technology proved advantageous to health-conscious drivers.

“We’ve all been growing up dialing a telephone number since we’ve been 6 or 7 years old,” he said. “We were able to leverage what you already knew how to do.”

Skillett said he thinks that going forward, even as office landlords sweat out the notion that working from home isn’t going away and that workers long-term are more likely to visit the office three days a week rather than the old-fashioned five, parking operators will continue to do well.

“People do love their cars,” he said. “Parking demand will continue to climb. It just looks different. There will be less 9-to-5-ers, and maybe there will be people who work less hours in the office, less days in the office, come in at different times. But the one thing you can say for sure is they will be driving, they will be parking, and that’s not going to change.”

“I ride the train every single day,” said David Garten, senior vice president at RXR. “I not only see my car in the train being more full, I also see really good adherence to wearing masks. Yes, there are one or two people that aren’t wearing a mask. But the MTA is trying to do as much enforcement as possible.”

With vaccination rates in New York City approaching 75 percent and rising, RXR is confident that things are returning to normal, including normal patterns of mass transit use. One risks death and injury when driving their own car, having nothing to do with the virus, Garten noted.

“Increasing transit ridership is absolutely essential to our recovery,” he said. “If everyone comes back, but they’re riding in cars, the impact would be catastrophic.”