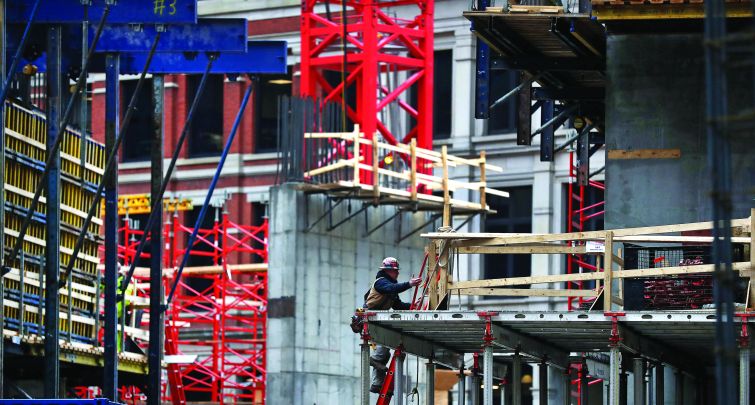 NO PARKING: Winthrop Center under construction in downtown Boston in mid-March, just as the coronavirus pandemic began to shut down work on projects all around New England’s largest city. The 691-foot tower is replacing a massive garage. Getty Images

The fourth-tallest building in the United States north of New York City is going up on the site of what until 2018 was the largest municipally owned parking garage in Boston. New York-based developer Millennium Partners is building a 691-foot, 1.4 million-square-foot mixed-use tower in the garage’s place.

Millennium expects to finish the building—dubbed Winthrop Center after its predecessor, the Winthrop Square Garage—in 2022, even with COVID-related construction delays. It looms as perhaps the biggest example nationally of the changing fortunes of conventional parking garages.

The rise of urban bicycling infrastructure and app-hail services such as Uber—both precipitating a decline in car ownership—as well as the densification of downtowns across the U.S. and the COVID-spurred shift to longterm remote work has disrupted the fortunes and futures of assets once deemed a sure return. Instead, owners, developers and investors increasingly see urban parking garages as dinosaurs in need of repurposing or juicy fruits ripe for selling as a redevelopment site. No one’s thinking too long-term about these assets that now seem more vulnerable.

“By 2018, 2019, 2020, I would say every time I would take a garage to market, 50 percent of the queries start with, ‘Hey do you have the zoning analysis, what else can I do here?’,” David Schechtman, a senior managing director at Meridian Capital Group, said of the New York City market in particular. “Any time a garage comes to market there’s tremendous interest in it.”

Those owners, too, that maybe are holding long-term—or that can’t unload these increasingly desirable sites—face the challenge of operating more safely in the tumult of a pandemic (see sidebar below).

Commercial real estate has long seen urban parking garages as a safe bet for investors or owners—or at least a decent placeholder. Much of that has to do with ability to quickly adjust parking rates and with the passive nature of the property. A garage has little upkeep cost relative to an apartment or an office building.

“The interesting thing about a parking deck or even a parking lot for that matter is they are sort of a perfect inflation hedge,” said Ryan Clutter, a senior managing director in JLL’s capital markets practice for the Americas. “The opportunity to change the rent on a more frequent basis is there.”

One other big reason has made parking garages a particularly safe bet: the longterm densification or infill of increasingly popular downtown urban areas. As new condos and offices sprouted in cities nationwide, bringing in thousands of more residents regularly, garages, publicly or privately owned, followed. Or they saw their business pick up and their values increase due to their proximity to this new development. This was true even in areas such as Boston, New York and Chicago with tentacular mass transit systems.

“Parking garages hit their zenith in 2004 to 2007,” Schechtman said of their value to investors. “Their values increased significantly because of the redevelopment and the residential condo conversion craze. There was a cool-off in 2008 and 2009, and that was just the market trends themselves. Then from 2010 straight up to 2016, you continue to see an increase in pricing and cap rate compression.”

Low gas prices also aided garages’ popularity as did the sluggish rise of ride-hail apps in the face of fierce political and legal opposition from the conventional taxi industry. Uber and Lyft took years to spread nationally after soft launches in a handful of cities at the start of the decade. From a consumer perspective, then, garages looked for a long time like the best satisfaction for their need to drive into a downtown.

The number of parking garages and lots in the U.S. increased from around 14,200 at the start of the millennium to more than 18,000 at the cusp of the 2008 financial crisis and more than 19,000 by 2020, according to research firm IBISWorld. Annual revenue during the same period held between around $9 billion and $10 billion, and stood more than $500 million above that figure by 2020.

As steady as the revenue is—IBISWorld in an April report forecasted revenue to rise slightly through 2025—it’s those locations that might ultimately buoy parking garages as investments and assets through the pandemic.

Driving plunged due to COVID. Miles driven nationally dropped by more than two-thirds in late March and April compared with early March, according to the Institute for Energy Research. With far fewer people needing to park, owning or investing in an operating garage seemed suddenly less of a safe bet.

At least at first glance. Garages always come with that exit potential, and it appears owners are increasingly taking the off-ramp. Sales prices vary, and garages tend to trade for similar to the cost of air rights or industrial properties, whatever the city, research suggests.

As for actual sales, CoStar data shows that 116 parking garages nationwide traded in 2019. Some 15 of those were explicitly for redevelopments. Such sales and redevelopment figures have been trending upward since the last financial crisis even if the volumes in the aggregate don’t seem particularly large.

In 2016, for instance, there was a 10-year peak of 131 garages traded, 12 for redevelopment. Compare that to 2009, when there were 34 traded, three for redevelopment, according to CoStar. (It should be noted, too, that the number of sales of parking lots—parking garages’ more open cousin—have also increased over the past decade.)

As of the last week of August, 47 garages had traded in 2020. Two sold explicitly as redevelopments: One at 550 Superior Avenue in Cleveland, which will become part of paint colossus Sherwin Williams’ new headquarters, and one at 98 Dekalb Avenue in Brooklyn, which developer Rockrose is incorporating into its first project in the borough (it bought the site, including the garage, in April for $62 million). The centerpiece is slated to be a 47-story mixed-use tower. A Rockrose spokesman said the garage on the site was already empty.

He did not respond to a request for comment on whether the garage made the overall parcel that much more desirable a purchase. Garages serve as revenue-generating placeholders for developers as they navigate permitting and financing on their way to construction.

The pandemic has disrupted this placeholding model a bit as has the rises of app-hail services, urban bicycling and the densification of America’s downtowns, but analysts say the model is still part of the appeal of redeveloping a garage. Besides, the pandemic caused a plunge in public transportation use in the same way it did in driving—ridership on the mass transit systems of New York, Los Angeles, Chicago and Boston were all down annually by double-digit percentages in the spring, for instance—and private car ownership has spiked since stay-at-home advisories have eased.

More than anything, it is that final off-ramp toward redevelopment that has spurred the rise in parking garage investment across the country, especially in urban areas. And it’s not necessarily teardown, wholesale redevelopment either. Some owners and investors are choosing to repurpose.

This has led some owners to convert unused spots during the pandemic into self-storage units or even into last-mile delivery spaces for e-commerce providers such as Amazon. The latter is true of at least one garage in Manhattan connected to a major East Side condo tower.

Then there are those handful of garages so far nationally that go up with a second life in mind from the beginning. These are usually a part of a larger mixed-use development or redevelopment. They include Netflix’s makeover of a 13-story Sunset Boulevard building in Hollywood. Its garage will have flat floors and concrete ceilings that can be easily removed on every other floor to facilitate other uses, including offices, according to the Los Angeles Times.

Basically, any new parking garage going up as part of a mixed-use project has an expiration date on it, analysts such as Daniel Flynn, a JLL vice president specializing in parking structures, say. So flexibility is built in, and the future as just a place for parking cars far from assured.

“Developers,” Flynn said, “have gotten smarter with maximizing the revenue, and ultimately their profits, on these garages.”

In the meantime, contact-less garages

If a developer does have to hold a garage through COVID—the financing climate is inhospitable anyway for most projects that don’t involve a changeover to last-mile delivery for the likes of Amazon—there is a shift now in the parking industry toward enhanced hygiene and seamless use.

It’s part-marketing as users want to know their risk from the pandemic is lower in using a particular garage. It’s also part-simply-the-way-the-industry-is-trending. Gone are the days of attendants in booths and ticket dispensers, and the bars that go up and down before and after each.

“The question always was why don’t you have contact-less access for gated parking facilities,” said Jerry Skillett, executive chairman of Spaces USA. “Of course, it’s not easy to do that from a functionality basis.”

Skillett says his company stands at the vanguard of touchless technology for parking garages. Users work off a one-time number dialed into their smartphone that allows them to access spaces in paid facilities for a $1 fee per use.

The technology works in conjunction with Waze, Google Maps and Apple Maps, and is in wider use since the pandemic started, Skillett said. In fact, he told CO he had just gotten off the phone with the City of Oakland regarding syncing some of its garages with the touchless technology. Most of the demand is coming from municipal governments and private operators in larger cities, he added.

If Americans do return more to the road post-pandemic, touchless services could indeed become more of the norm at most garages—Skillett says his company has identified 10,000 facilities in 40 cities where the technology could work.

But redevelopment opportunities and those larger societal changes in mobility habits—the Ubers, the bike lanes, the coming of driverless cars—will continue to define the fates of urban parking facilities.