Tourists have returned, but so have challenges for office and retail in the entertainment hub 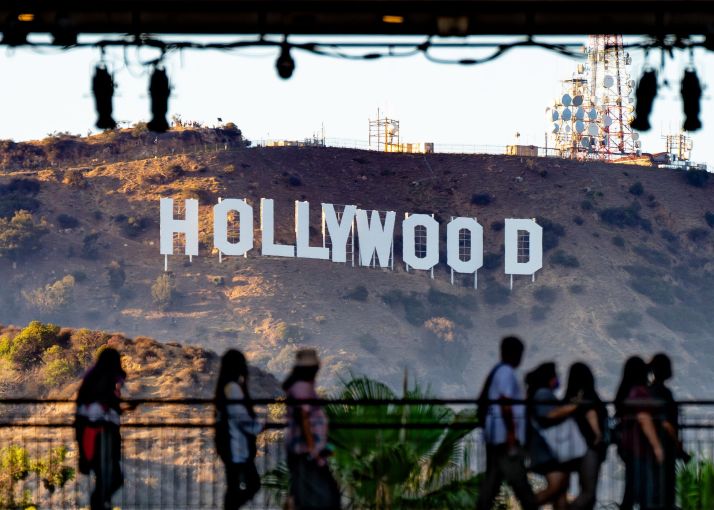 The street performers are back on Hollywood Boulevard, but now they’re not the only ones wearing masks.

Movie premiers and tourists have also returned to Hollywood this summer, bringing with them some feelings of a pre-pandemic “normal.” But — even before the Delta variant took control — serious challenges await beyond the boulevard, including large vacancies for both office and retail, as well as a frustrating lack of affordable housing.

The Hollywood Partnership (THP) nonprofit reported that there’s now more than $2.1 billion of new investment either under construction or entitled, all within the core Hollywood Entertainment District — including the $100 million revamp of the Hollywood & Highland shopping center — sparking hopes of a new golden era for Hollywood.

“While we are not entirely out of the woods, we can see the clearing through the trees,” said Kristopher Larson, president and CEO of THP. “For the second quarter in a row, pedestrian traffic is rapidly rebounding in Hollywood, bringing visitors from not only the region, but from the entire country.”

Eric Willett, Pacific Southwest research director at CBRE, said Hollywood has been one of the better positioned markets over the past year and a half. He said the content production-oriented submarkets across L.A. have done relatively well, and “Hollywood is ground zero for that.”

With streaming companies like Netflix, Disney, and HBO pushing to expand and generate as much content as possible, demand for content space has bolstered Hollywood’s base. For example, as one of L.A.’s premier landlords for content creation and office space, Hudson Pacific Properties (HPP) is leading the way with its Sunset Studios portfolio. The firm is currently advancing plans to expand one of its top studio and office campuses in Hollywood to more than 1.1 million square feet.

Willett added that Hollywood has seen increasing interest for more mixed-use complexes combining studio space, office space, retail space and multifamily. For one, Harridge Development Group’s massive Crossroads of the World project is the largest project in the pipeline, with 1.3 million square feet of space that includes new offices and retail, along with 950 residential units.

What’s more, pedestrian counts significantly improved in the second quarter after authorities lifted business restrictions. After the quiet lockdowns, pedestrian counters measured a 164 percent increase in activity at the Hollywood and Highland intersection during the months of April to June, according to THP’s report.

Hotel occupancy also rose quickly to more than 60 percent this past quarter, and more hospitality investment is underway, including the 134-room Whiskey Hotel north of Hollywood Boulevard. Additionally, a new Hyatt hotel on Cahuenga Boulevard recently secured a $27 million bridge loan to continue construction, and five hotels are under construction within Hollywood’s core entertainment district, with another 12 entitled or seeking entitlements within the greater Hollywood area.

The past year has presented new challenges to office space in Hollywood, as much as it has in the rest of the city and in urban areas around the country. Asking rents for Class A office hit $4.73 per square foot per month in Hollywood, a slight decrease quarter over quarter, according to THP. But, Willett pointed out that Hollywood benefits where other markets don’t in attracting big players.

“These tenants are making a long-term bet on the submarket as the headquarters location,” Willett said.

Multifamily investment demand is also returning to pre-pandemic rates as rent rebounds with the “great return” this year. Unfortunately, that also means a return of the affordability crisis. Willett said the lack of affordable housing remains one of the largest obstacles to a resurgence of Hollywood, with limited available land and arduous timelines and entitlement processes for developers.

“We hoped to see more affordable housing coming out of the pandemic,” he said. “Unfortunately, it’s still very unaffordable.”

Retail vacancy is the most noticeable dark spot in Hollywood, and likely will be the last to develop in a rebound, as nearly 2 in 5 properties remain open. Even after retail and business reopened this year, Hollywood posted a slight 1 percent decrease in occupancy from the previous quarter.