COVID was supposed to punch the trend into overdrive, but most tenants are choosing WFH or their HQ 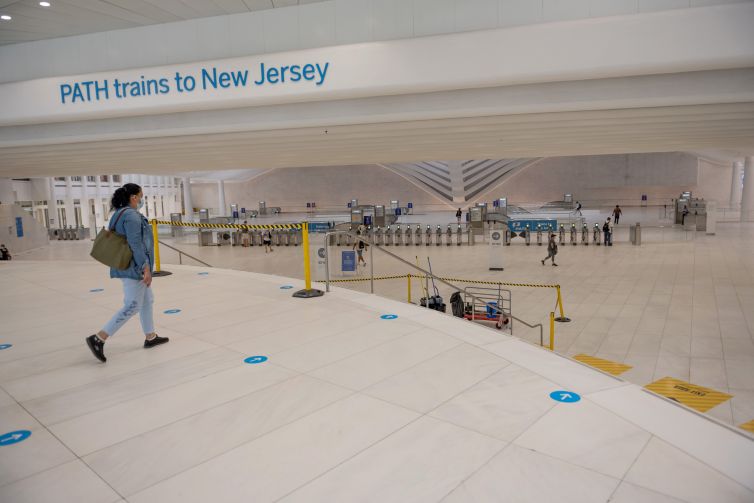 Are more companies sending their workers out of hubs like Manhattan and into suburban office environments like New Jersey? Not really, it turns out. Alexi Rosenfeld/Getty Images

It was just common sense. As the coronavirus made going to the office less and less appetizing, folks would eventually tire of working from home. And commercial real estate experts visualized a future for satellite offices orbiting bigger headquarter hubs. These smaller workplaces out in the burbs — or, in New York City specifically, the outer boroughs — would be closer to where people lived, which would literally split the difference between continuing to stay home and rejoining the rat race.

It hasn’t quite worked out that way. At least, not yet.

As of this moment, mid-summer 2021, there is no mass push for satellite offices, or what some are calling the hub-and-spoke model of officing that excited owners of hard-pressed suburban office buildings and trendy places in Brooklyn and Queens where working and living come together. Instead, big-time bosses like Jamie Dimon of JPMorgan Chase, Brian Moynihan of Bank of America and James Gorman of Morgan Stanley are focused on getting all of their workers back in their traditional offices, where they can breathe in deeply the corporate culture that the companies believe contributes mightily to their, and the companies’, success.

“The answer is: No, it has not (caught on),” said Jeff Heller, a managing director at brokerage Avison Young, who oversees its suburban northern New Jersey office territory that runs from the New York border down to about Princeton. “Which is an astounding thought. We thought in a pandemic, suburban New Jersey real estate, the office component, would be relevant. But it’s not there. It doesn’t mean it might not be there in the future.”

“There are four main objectives of an office,” he said. “The first is to provide space for people to work. Second is to build and develop an organizational culture. The third is to facilitate creativity and ideation. When people are together, they come up with greater solutions. And, then, finally — and this is probably one of the least talked-about objectives, but it’s real — to drive employee accountability. This goes back to the factor of trust. If you’re not in the office, you’re not working.”

The hub-and-spoke model “certainly addresses one and four, but doesn’t address two and three,” Herrenkohl said.

Right now, companies’ overarching concern appears to be recreating the culture and creativity that drove their success, and are less concerned with addressing employee concerns about the wear and tear of their commutes and the physical toll that the crowds on the train, or fighting traffic in a tunnel, might be inflicting on them.

What’s more, satellite offices don’t maintain themselves. Somebody has to clean and supply them, and having more locations means more locations to look after. This adds costs that companies might be able to avoid if they just let workers continue to work from home one or two days a week.

“From an organizational perspective, it’s costly and complex to maintain a large portfolio of smaller facilities,” Herrenkohl said. “It’s not just the cost of the real estate itself, but all of the management costs. Most companies will find this middle ground between what they want to do, which is create a culture and facilitate creativity, but also meet the needs of their employees by having more hybrid-type arrangements.”

Many banks, like TD Bank, New York Community Bank and Berkadia Proprietary Holding, found that they could maintain their commercial mortgage operations with their employees working from home in the teeth of the crisis. Zoom, Webex and Microsoft Teams “were not part of our toolkit, but now certainly are,” Gregg Gerken, a TD Bank executive vice president, said in an April interview with Commercial Observer.

One bank that might prove a natural for satellite offices is Bank of America, the Charlotte-based company that has a wide network of underutilized commercial branches, plus an array of local offices it inherited from Merrill Lynch & Co., when it acquired the investment bank in the financial crisis more than a decade ago. A spokesman for the bank declined to comment on that possibility.

Last month, Bank of America CEO Brian Moynihan said the bank was encouraging its vaccinated workers to come back to their offices by Labor Day, according to CNN, citing a Bloomberg Television interview.

SL Green Realty Corp., New York’s largest office landlord, which also controls office properties in the New York suburbs, is another that has seen no evidence of satellite office demand.

“To date, we have not seen any of our tenants execute a hub-and-spoke strategy,” Steven Durels, SL Green’s leasing director, said in an email. “None of our tenants have even inquired about opportunities to lease a satellite office in our suburban buildings.”

The landlord owns interests in 35.3 million square feet of buildings, 27.1 million of those in Manhattan. It also controls property in Stamford, Conn.

One place where satellite officing might be happening, albeit in a small way, is Greenwich, Conn. The tiny town, home of some of America’s richest people, saw about 270,000 square feet of leasing between March 2020 and March 2021, according to an analysis by brokerage CBRE, about 54 percent from Manhattan-based firms. David Block, a CBRE executive vice president based in Stamford, described the new leasing as “a mix” between wholesale relocations and those looking to add an office to save on commute times for employees, who he said are predominantly from boutique financial firms.

“Clearly, there are a number of these transactions that are satellite offices,” Block said. “If you look at all of the space in Greenwich that’s in lease, since the beginning of the pandemic through even all of the transactions that are in progress right now, you’re probably talking about 350,000 to 400,000 square feet — which is incredibly impactful for Greenwich. But, if you compare that to velocity in New York City, I’d hardly say that we’re seeing a mass exodus as a result of COVID.”

In Long Island, Avison Young found a nearly 42 percent falloff in leasing activity when comparing a 20-year annual leasing average to a prorated figure for 2021. This year, the firm is projecting a total of 1.7 million square feet in Long Island leases.

And at Commercial Edge, a property data and listing service, the firm saw no satellite-related activity at New Jersey’s Metropark office complex, which is serviced by a NJ Transit station that makes commuting into Manhattan easy. Spokesman Doug Ressler said the vacancy rate for the market in which Metropark is located, including Union County, has actually gone up this year, to 18 percent from 17 percent at the start of 2021.

One voice of optimism is Scott Rechler, CEO of RXR Realty, former vice chairman of the Port Authority of New York and New Jersey, and a one-time board member of the Metropolitan Transportation Authority. The numbers from Avison Young notwithstanding, he said the Class A market on Long Island “is the strongest I have ever seen” and that demand for satellite offices is coming around.

“In the early stages of the pandemic, there was a lot of talk about companies opening satellite offices,” Rechler said. “That subsided when it became clear that people would be working from home for public health issues, and it was premature to start considering that. I would say that over the last couple of months, we’ve seen a renewed interest in companies looking for satellite offices.”

“As they think about the hybrid work environment, people who are working remotely, who are working from home, can work in a smaller satellite office closer to their home, avoid their commute, but still be in a place where they have the technology, the ability to be productive, and the ability to engage with other team members,” he added.

Update: This article has been updated to reflect Avison Young’s correct statistics for Long Island leasing.