Shootings are in the headlines but were down year over year in June, according to the New York Police Department. 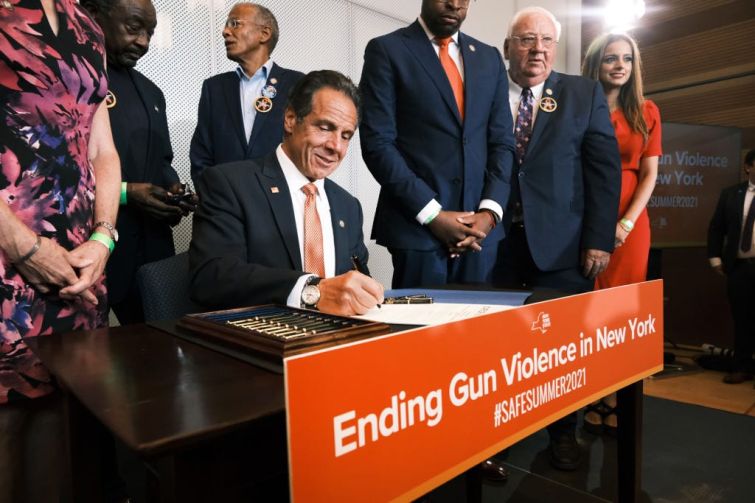 Tourism represents an $80 billion dollar industry in the Big Apple, but recent concerns over gun violence might hamper its recovery — and the business community is concerned.

After tourism took a massive hit during the pandemic, the city’s trouble with gun violence drew national attention when Gov. Andrew Cuomo declared it a disaster emergency on Tuesday. The real estate industry has been left wondering when travelers will return to city streets — and what those streets will look like when they do.

“Tourists are starting to inch back into the city, but the press is focused, as they should be, on violence on the street,” Dan Biederman, president of the 34th Street Partnership and executive director of the Bryant Park Corporation, two Manhattan business improvement districts, told Commercial Observer. “It is not good for tourism coming back that the number of shootings is up.”

Just days after Cuomo’s executive order, Mayor Bill de Blasio announced a $30 million investment in the city’s tourism campaign, funded by federal dollars, to create a television spot to showcase New York City. Three will air starting in the summer and ending in the holiday season, as the mayor’s office hopes to bring tourism back to 2019 levels.

The real estate community wants to bring visitors back, too. Landlords, hotels and the city all rely on the industry, and tourism indirectly supported 376,800 jobs in 2019 and accounted for 7.2 percent of total private-sector employment, according to an April report from the New York State Comptroller’s Office. But visitations fell by a whopping 67 percent in 2020 from 2019, the report found.

While Cuomo’s state of emergency might draw more attention to the city’s crime numbers, the real estate community has welcomed the effort with open arms.

A representative of the Durst Organization, which holds valuable Manhattan real estate likely to be affected by changes to tourism levels, said Cuomo’s efforts were appreciated by the large landlord. The Real Estate Board of New York (REBNY) agreed and applauded Cuomo’s decision, saying it was part of the path to revitalizing tourism.

“As New York moves forward on the path to economic recovery, public safety remains a top priority in efforts to bring workers back to the office, support small businesses and revitalize tourism,” REBNY President James Whelan said in a statement to CO. “We applaud Governor Cuomo for focusing wisely and comprehensively on strategies to address gun violence, strengthen communities and create good jobs for New Yorkers who are struggling.”

Other city landlords and organizations with holdings that would be impacted by a decrease in tourism as a result of a perceived increase in shootings were less willing to discuss Cuomo’s announcement. Empire State Realty Trust, which owns the iconic Empire State Building, declined to comment, as did NYC & Company, the city’s official tourism board.

But, even with headlines of gun violence, Biederman was hopeful that tourists, at least domestically, are creeping back into the city.

“There was absolutely nothing for most of last year after March,” said Biederman. “We started seeing tiny signs of returning tourists about six weeks ago, to the point where I would greet them and say, ‘Thank you for coming to New York.’ Now, it’s not so rare to see tourists.”

Even with Cuomo’s emergency declaration, murders and shootings in the city were down in June compared to the same time last year, according to the New York City Police Department’s CompStat data, while gun arrests were up.

When announcing the declaration, Cuomo said more people are dying from gun violence and crime than COVID-19. In the state, 343 people were killed by COVID-19 in June alone according to New York Times data, but police departments recorded only 82 gun violence deaths from January through May 2021 in 20 participating county police departments. In New York City, there were 165 shooting incidents in June and 33 murders, compared to 191 deaths from COVID-19.

The governor’s office clarified that Cuomo was referring to the Fourth of July weekend. From midnight July 2 morning to midnight July 5 morning, 26 people were shot, News 10 reported. Only 15 New Yorkers died of COVID-19 from July 2 to July 5, according to New York Times data.

Crime overall was up slightly — just over three percent compared to June of 2020. And, an increase might make sense, given the context of the state’s reopening from coronavirus pandemic-caused restrictions and protest inspired-curfews.

After protests over police brutality last year, de Blasio instituted an 8 p.m. to 5 a.m. curfew for the first week of June — the first in the city since 1943, CO reported. The rental market was in decline due to shelter-in-place restrictions that prevented some brokers from showing listings. Retailers were closing their doors and residents were fleeing expensive cities. Meanwhile, landlords were taking to the courts to sue for missed rent.

Today, New York City is far more open than last year. Cuomo lifted COVID-19 restrictions after reaching a threshold of vaccinating 70 percent of adult state residents. Life is returning to the city as movie theaters, retail and construction industries are allowed to reopen — though mask requirements remain in accordance with Centers for Disease Control and Prevention guidelines.

Crime for the last six months, however, is up compared to the first six months of 2020. The NYPD recorded 718 shootings from Jan. 1 through June 27 this year, compared with 503 in the same period last year, according to The Wall Street Journal. That 215 increase is substantial, but it comes at a time when tourists and businesses are returning to the city, rather than fleeing it.

But crime is up from 2019 levels as well. The city saw almost twice as many shootings in 2020 compared to 2019, and the decrease in shootings last month still puts shootings above 2019 levels. The violence this year is at its highest level since the early 2000s (but still nowhere near the levels in the city saw in the 1970s), according to The New York Times.

But Kevin Ward, vice president of security for both the 34th Street Partnership and the Bryant Park Corporation, raised concerns that a backlog in the court system and a lack of prosecution of those caught illegally possessing a firearm were to blame for the uptick in crime. When asked if the pandemic could have deflated last year’s crime numbers, creating an artificial uptick in 2021, he said the pandemic’s impact was likely only in slowing prosecution, not crime.

And Republican leaders of the state Assembly and Senate have similarly argued that Cuomo’s move was a distraction from recent changes to state law that eliminated monetary bail for most misdemeanor and nonviolent felony offenses. Bail reform supporters argue that the change makes the criminal justice system fairer, WSJ reported.

Cuomo’s executive order includes a $138.7 million investment in intervention and prevention programs, and the creation of a new State Police Gun Trafficking Interdiction Unit, using $2.5 million of the money. It will also waive state laws requiring pre-review and competitive bidding of certain spending, WSJ reported. The state comptroller’s office, which oversees most state expenditures, said they were still reviewing the impact of Cuomo’s decision.

“Gun violence is a growing problem in New York,” Jennifer Freeman, a spokesperson for Comptroller Tom DiNapoli, said in a statement to CO. “We need to address it on a local and statewide level. Any strategies should be developed with broad public input and spending should be open and transparent and follow a process that ensures taxpayer money is protected and accounted for.”

About $76 million will go towards creating job opportunities and community activities for youths, including $10 million for summer jobs in gun violence hotspots, $2 million for youth activities in those areas, and $18.5 million for job training, according to the governor’s office.

Another $50.2 million will go to anti-gun and crime initiations, including the creation of the new Office of Gun Violence Prevention, crime analysis centers, and violence-interruption programs like SNUG, where nonprofits hire workers to serve as mediators in disputes, according to Cuomo and WSJ.

Cuomo’s announcement also included new legislation that allows those harmed by firearms to sue gun sellers and manufacturers. A person, however, would have to demonstrate that a seller acted recklessly and didn’t establish reasonable controls to prevent their products from being marketed or sold illegally in the state, according to WSJ.

The new legislation designed to allow gun violence victims to sue is designed to avoid a 2005 federal restriction of such lawsuits, and will likely be challenged in court. New York Attorney General Letitia James said in a statement that she welcomes enforcing the new law.

And REBNY is ready to work with the attorney general and others to keep the city on the path to recovery.

“REBNY and its members look forward to working with the Governor and elected officials across the state to further improve public safety and quality of life as we continue building momentum for New York City’s greatest comeback,” Whelan said in a statement.

Update: This story has been updated to include additional clarification from the governor’s office and 2019 data on gun violence in New York City.