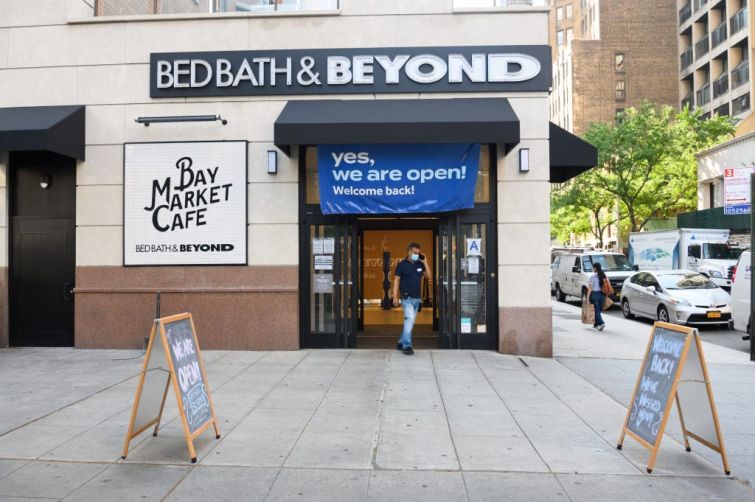 Bed Bath & Beyond was one of several tenants around Manhattan being sued by its landlord for missed rent during the coronavirus pandemic. Photo: Noam Galai/Getty Images

A wave of landlords took to the courts this week to get their retail and commercial tenants to pay up after skipping out on months of rent during the coronavirus pandemic.

But some tenants have taken to the courts themselves. Italian-luxury brand Valentino, Victoria’s Secret, Bath and Body Works and Gap sued New York City landlords to get out of their leases this month.

“After the courts reopened [in late May] the parties generally took one more stab at resolving their disputes out of court,” said lawyer William Mack of Davidoff, Hutcher & Citron about the flurry of activity this week. “In these instances, those attempts at resolution failed.”

At L Brands’ Bed Bath & Beyond, landlord Gazit Horizons claims the retailer hasn’t paid rent on its Upper East Side outpost at 401 East 60th Street since May and owes $567,000.

Gazit allowed the retailer to pay only 20 percent of rent in April, but Bed Bath & Beyond still hasn’t paid the back rent, the lawsuit said.

“As an additional showing of good faith, [Gazit] waived any interest and late fees on the remaining amount due for the month of April,” the lawsuit said. “[Bed Bath & Beyond] has failed and refused to pay.”

A spokesperson for L Brands did not immediately respond to a request for comment.

“We have a long-standing relationship with this tenant and we’re hopeful this will get worked out,” Jeff Mooalem, the CEO of Gazit, told Commercial Observer.

Other recently filed cases include Aurora Capital Associates suing women’s clothing store New York & Company after it missed $196,520 worth of rent for May and June at 8 West 126th Street in Harlem and Gould Investors’ case against Mattress Firm for not paying rent at its 111 Third Avenue shop since April.

Landlords, aware of the impacts on the coronavirus to many businesses, have been willing to work with tenants on rent brakes but still have taxes and mortgages to pay, said James Famularo, the head of Meridian Retail Leasing.

“I think it’s out of necessity,” Famularo said about the lawsuits. “They need to file some suit against their tenants to show the bank, ‘Look, I’m not getting any money. Please give me forbearance. Work with me, I don’t want to lose the building.’”

On the retailers’ end, many had to deal with forced closings of outposts and the country experiencing historic drops in retail sales. While most were successful in working with landlords on breaks, others only took to the courts as a last resort, said Mack.

Mack is working on cases for several tenants, including Victoria’s Secret suing SL Green Realty Corp. to get out of its lease at 2 Herald Square. He declined to discuss the specifics of that case but said being forced to close by the pandemic “frustrated” the purpose of leases for his tenant clients.

“Nobody predicted that, for a big chunk of time, you’d be barred by law for accessing the property and it wouldn’t be safe accessing that property,” he said. “It was important to their business that they have access throughout.”

On Tuesday, Gap sued Bow-Tie Partners after it claimed the landlord hit it with notices to “terminate” its Old Navy and Gap leases at 1514-1530 Broadway in Times Square and trigger default notices after it missed rent.

Gap argued that the leases are now “unenforceable” because of the coronavirus pandemic and it would never sign on for the “enormous rent” for both stores post-COVID-19.

“Plaintiffs would never have agreed to pay rent in excess of $1.5 million per month for each … without Times Square’s teeming sidewalks and hordes of eager shoppers,” the lawsuit said. “But in March 2020, everything changed. New York City became a ghost town and overnight, retail activity in New York City came to an abrupt halt.”

Spokespeople for Gap and Bow-Tie did not immediately respond to requests for comment.

While the tenant lawsuits lean heavily on mentioning the coronavirus pandemic and its devastating effects on the city — with Gap’s lawsuit giving a detailed play-by-play of the local and federal governments’ response to the virus — most landlord lawsuits don’t mention it at all.

“I think it’s absolutely intentional,” Mack said. “A landlord can’t refer to the coronavirus at all without addressing the fact that we’re in an absolutely severe situation. The landlord is going to want to look at this as a straight contract claim.”

Mack expects judges will have the coronavirus pandemic in mind during these cases anyway and he plans to use it heavily in his defense on behalf of tenants.

But before taking to the courts, Famularo advised his landlord clients to work with any tenant who comes to the table asking for relief, since many are simply giving back the keys.

“Any tenant willing to sit down and negotiate something, most of the landlords are willing to take a meeting,” Famularo said. “Now is not the time to have vacancies.”

J. Crew, JCPenney, Neiman Marcus, Aldo and True Religion all filed for bankruptcy during the pandemic. Pier 1 Imports announced it was going out of business and coffee giant Starbucks plans to close 400 stores around the country.

“When the dust settles we’re probably at a 55 percent vacancy level,” Famularo said. “Even the most successful companies are evaluating all their locations and all their business and cutting their bottom 20 percent.”