Sheila Lirio Marcelo, executive chairwoman of The Wing since March, has ambitious plans for the formerly embattled coworking company 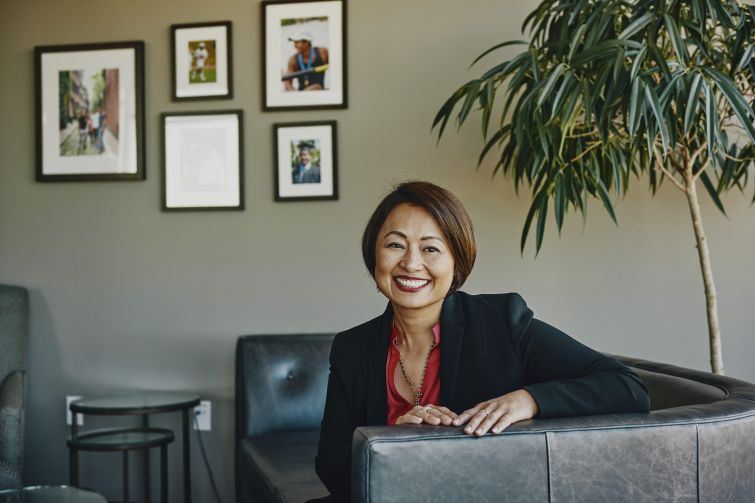 Sheila Lirio Marcelo joined The Wing after a long year for the female-oriented coworking space.

The Wing spent part of 2020 combatting bankruptcy, responding to allegations of racism and discrimination in the workplace, and losing its co-founder and CEO Audrey Gelman (who stepped down after those aforementioned allegations).

Marcelo, the new executive chairwoman of The Wing, joins the company after an extensive career as an entrepreneur and business leader. She founded the child care and senior care website Care.com in 2006, after struggling to take care of her own child while attending Harvard Business School (at one point, her father suffered a heart attack while babysitting Marcelo’s child). Media and Internet holding company IAC acquired the company for $500 million in 2019.

Marcelo was tapped to lead The Wing after IWG — which owns coworking brands Regus and Spaces — threw a lifeline to the operator and acquired a majority stake.

Now, a few months into her new role, Marcelo says the company might be widening its wingspan to include sites nationally, and even globally. Marcello described her plans for The Wing and her expectations for the coworking industry as the U.S. recovers from the pandemic.

Commercial Observer: What attracted you to this position?

Sheila Marcelo: A few things. Certainly, I tend to look at mission-driven companies that really serve women — it’s, I think, my calling in life.

What do you see for the future of The Wing, as we collectively recover from the pandemic? Do you expect coworking to bounce back along with other industries?

I think there’s a lot of excitement on coworking. When we polled our membership base, 86 percent indicated that they can’t wait for us to reopen … I think there’s this increasing demand for what we’re calling hybrid.

The beautiful thing about what The Wing is offering is, really, this sense of geographical flexibility. Our intention at The Wing is actually to grow in a lot of different areas, both in metropolitan areas as well as suburban, and to really help overall address … what women need in terms of a flexible workspace.

Then, of course, there are the individual female founders that want a space that they can go to that’s safe, that has their peer group … When I was in West Hollywood and when we reopened, there were … five or six female entrepreneurs who had all met in The Wing about a year ago. The first day it opened, they had a little bit of a reunion … They were all chit-chatting about how they supported each other and they missed that.

What markets are you thinking about for an expansion?

It’s national and global that we’re going after. So, we’re excited about our expansion plans and we’ll announce that soon.

Coworking has faced a lot of challenges over the last two years. Is The Wing doing anything to its lease agreements to deal with these sudden changes or challenges, like early exit clauses or force majeure clauses?

I think in general, every coworking company, or even any company for that matter, is revisiting their leases in a sense … All I can say is we did absolutely approach our landlords, given the situation, everything that was happening, the pandemic.

What makes a good market now to expand into for a coworking location?

There’s a sense of overall demand that we always assess. If you’re opening any kind of retail location … ensure that there is a combination of both enterprise clients as well as an ecosystem that supports female founders.

We’re also starting to really assess and learn a lot from IWG on how do you address the needs of where it’s going to change, where people don’t want to commute far anymore … So that urban-suburban is really something that we’re seriously looking at and learning from IWG.

There were allegations of racism and discrimination last year that forced The Wing’s former CEO to step down. Do you have any plans to change the culture at The Wing? What efforts are you and The Wing making right now to address these issues?

I wasn’t around last year when all of these things happened, so I can’t really comment on that. But what I can say is that, when I did join and [when] I started informally advising in the summer, Lauren [Kassan, Wing co-founder and current CEO] had already put a lot of plans in place. She had actually traveled in late 2019, doing focus groups around the country and, like, really listening to members’ needs — and then starting to put together a cultural code overall, and that means improving training and improving a sense of attention to employees’ needs.

Since I’ve been involved, and not only in terms of me, obviously, as a diverse candidate to be the chair of the board, but also we invited [partner and managing director at Boston Consulting Group] Robbin Mitchell to join the board.

We also added an advisory board that’s helping. It’s quite diverse: [author and digital strategist] Luvvie Ajayi Jones, [CEO of Roshan Pharmaceuticals] Hitha Palepu, as well as [founder and CEO of digital startup BlueButterfly] Donna Byrd, and they have such a great sense of perspective.

I was just interviewing another candidate and she is of transgender background, and her feedback is, “How do we think about space design? How do we make sure there’s a sense of inclusivity?’ … We really are seriously investing to really grow The Wing in a way that really resonates with me and my value set.

The New York Times reported that Wing membership was mostly white, while hourly wage workers were mostly people of color. I’m wondering if you’ve considered any efforts to change the racial gap between Wing members and employees, or any adjustments in terms of dues and cost of attendance?

I can’t comment on the statistic, because I wasn’t around during that period; whether that’s factual or [not], I don’t know. But I do know that The Wing is open to all. We also do have the availability of scholarships for … applications. We want it to be accessible, and I think that that’s important. I’m a big believer in diversity [and] inclusion, and again in an authentic way in both my background and at Care.

You mentioned being competitive with pay and benefits. Do you see this as crucial to The Wing’s mission? And how competitive are you trying to be?

Absolutely crucial to the mission … Part of the role that I have on the board is also a sense of oversight around policies and procedures … We didn’t allow any job posting on Care that was below minimum wage. And it was very important to me.

That’s another reason … that I thought that I was also a fit for this, if you think about who we’re serving. The dual marketplace of Care.com was families as well as caregivers, and caregivers are hourly workers. For me, that sense of building a company for longevity on both sides is really important.

So, members have access on their subscription side, just a lot like Care.com, and then making sure that our hourly workers are respected, and that we’re thinking through how policies can actually help us grow. The only way to grow is to have the authenticity with regard to respect of the employees.