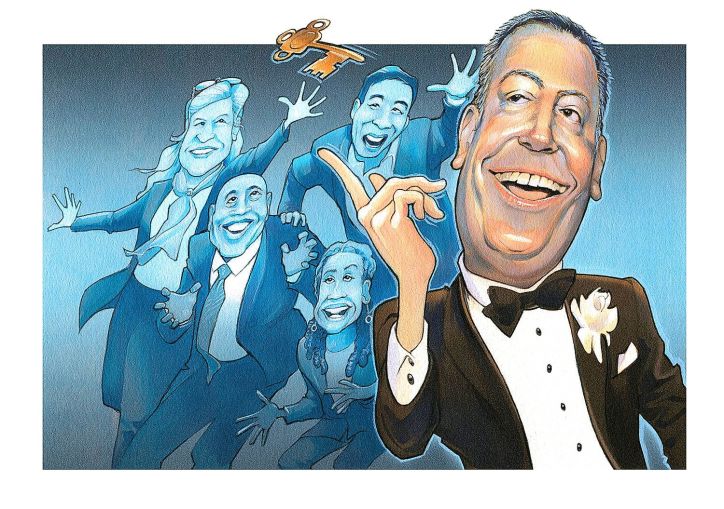 Mayor Bill de Blasio has to hand off the keys to New York City to one of several candidates in a crowded field for the Democratic mayoral primary next month. Illustration: Bruce MacPherson

The Democratic primary in the New York mayor’s race is on June 22. Given the city’s political  demography, it will pretty much decide who succeeds Bill de Blasio after eight years (and will likely ensure his successor a spot on next year’s Power 100 list).

While many New Yorkers might feel like the race has been going on for an eternity, there is still no clear, slam-dunk frontrunner — much like in 2013, when de Blasio won (remember Anthony Weiner’s surge?). Part of this is that “undecided” still polls high; another part is that for the first time ever, New Yorkers will be voting by ranked choice. If one candidate is the second option for enough of the electorate … well, that person could hit the jackpot.

Here’s a rundown of the outlook for the frontrunner candidates:

Adams, the Brooklyn borough president, is leading the race for the first time since it began, according to a poll released May 5. The three-day survey from D.C.-based firm GQR found that 21 percent of respondents ranked Adams as their first-place pick, Politico New York reported. The former cop and Brooklyn state senator’s strongest support came from Black voters, with 47 percent saying they would choose him as mayor.

Using his 22 years as a New York City police officer, Adams has positioned himself as the candidate most capable of cracking down on a spike in gun violence across the city. As of May 9, there have been 451 shootings in 2021, compared to 242 at this point last year, according to Police Department statistics.

“This city is out of control,” Adams said at a recent event outside of a Manhattan subway station where a woman had been assaulted. “That’s what has changed in this mayoral race: people are finally hearing me. We don’t have to live like this.”

Rather than taking the approach of progressive candidates who favor defunding or otherwise reforming law enforcement, Adams wants to bring back the NYPD’s controversial plainclothes Anti-Crime Unit, which Police Commissioner Dermot Shea disbanded last summer in the wake of the George Floyd protests across the city. Adams also favors the vague concept of “precision policing” and, referring to the department’s analytics system, “a CompStat-like plan of action that includes bringing all stakeholders to the table … to address the reasons behind our spike in shootings.”

Adams also appears to be friendlier with the real estate industry than some of the other candidates, taking in $322,770 between 2015 and 2019 from developers or real estate lobbyists who sought his support for rezonings or special permits, local outlet The City reported last month. In terms of policy, his housing plan is pretty vague, but he does support upzoning a large swath of Midtown South for more affordable housing.

Former presidential candidate and mayoral frontrunner Andrew Yang found himself in hot water recently, after tweeting his support for Israel amid a new wave of violent conflict between Palestinians and Israelis that has led to the deaths of at least 83 people in Gaza and seven people in Israel. After being confronted at a campaign stop and experiencing backlash from his own campaign volunteers for failing to acknowledge Palestianian deaths, he walked back the statement and released a new one, noting that he “failed to acknowledge the pain and suffering on both sides.”

The miscalculation is emblematic of Yang’s campaign, which has generated more press than any other candidate, both because of his fame and his Twitter gaffes.

Although he recently unveiled a housing plan, Yang sometimes appears ignorant about the intricacies of New York City’s complex housing, transit and social welfare issues. (However, he did correctly guess the median price of a home in Brooklyn recently, which the more seasoned pols failed to do.) Even his $1,000-a-month universal basic income proposal has faced criticism for potentially asking low-income New Yorkers to forfeit other kinds of financial support from the government in order to receive the UBI check.

But his freewheeling and approachable personality endears him to voters, and he comes to the race with an existing base from his 2020 presidential campaign. A new poll released May 12 by Schoen Cooperman Research posits him as the first-choice candidate for 21 percent of voters, followed by Eric Adams in second place at 17 percent.

His pro-business and pro-development stance has also made a positive impression on the real estate industry, with some Real Estate Board of New York members describing him as “thoughtful,” “non-ideological,” and having a “better-than-you-would-expect understanding of the tax system and the market,” Commercial Observer reported.

Despite having less name recognition among voters than the two frontrunners, former de Blasio counsel Maya Wiley netted 10 percent of voter support in a recent poll, according to the Daily News. A former attorney in the American Civil Liberties Union and the federal Southern District of New York’s Civil Division, she also founded a racial justice nonprofit called the Center for Social Inclusion and did a stint in 2016 as chair of the Civilian Complaint Review Board, an NYPD watchdog.

She recently released a plan to boost tourism in the five boroughs by hosting a weeklong “Grand Reopening Festival” in September that showcases different cultures and cuisines in various neighborhoods. Subways and buses would be free for that week.

Her new plan also calls for a $100 million “creative economy recovery program” that would provide direct grants to artists and performers, along with $1 billion in city capital spending to support the arts and culture.

Armed with a New York Times endorsement and now polling in fourth place with 8 percent of the potential vote, Garcia appears to be slowly gaining on the frontrunner candidates. A longtime city worker, she ran the city Sanitation Department for six years before stepping down to run for mayor. She has also served as interim chair of the New York City Housing Authority and as the city’s “food czar” during the pandemic.

She recently released a citywide reopening plan that calls for livestreaming Broadway and Off-Broadway performances, giving local businesses a year-long break from fines and fees, and creating a single permit for small businesses and entrepreneurs to apply for when they want to open a new venture.

On the real estate side, she has voiced support for rezoning Gowanus, Brooklyn, and SoHo, building more supportive housing, and for accelerating the approvals process for rezonings and new housing construction.

Both a former secretary of the U.S. Department of Housing and Urban Development and an ex-commissioner of the city’s housing agency, Donovan comes to the race armed with detailed housing and zoning knowledge.

However, he recently flubbed a question from the Times editorial board about the median sales price of a Brooklyn home, (hint: It’s not $100,000). Observers were shocked, particularly since he purchased a $2.3 million carriage house in Boerum Hill, Brooklyn, in 2019. Despite significant ad spending, Donovan has struggled to gain a foothold in the race for the Democratic nod.

McGuire, a pro-business former Citigroup exec, has largely failed to break through to voters, despite an advertising push with mailers and television ads. The latest poll has him and Donovan tied at only 6 percent support from voters.

But he seems to be the real estate industry’s favored candidate and has raised more than $7 million over the past few months from some of the city’s biggest political donors. He has also attracted plenty of celebrity endorsements, from the likes of musical giants Diddy, Nas and Jay-Z, as well as from athletes Patrick Ewing and Tiki Barber. His campaign has emphasized policies like public safety and police reform, as well as subsidizing worker salaries and rent relief for small businesses.