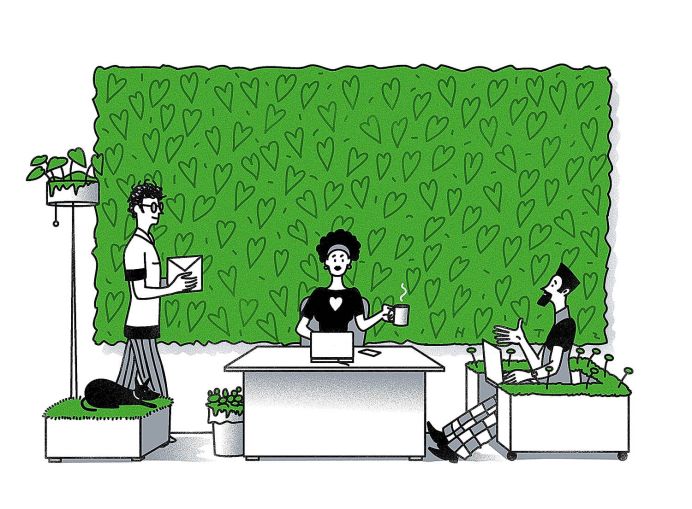 “Welcome to a work in progress,” said Matthew Barlow, a vice chairman at the commercial real estate brokerage Savills, with an enthusiasm that would have been tough to fake.

Barlow was showing off his company’s new North America headquarters at 399 Park Avenue, once the nexus for Citigroup, and one of the stately internationalist boxes that stand guard over the core of America’s business center.

He was especially excited about the walls scattered about the 11th floor, on which greenery grows, real plants, designed to bring a taste of nature inside what was once a staid corporate environment.

These walls, commonly called “living walls,” are becoming more and more normal in corporate environments, hailed for bringing a sense of calmness, a oneness with nature, and a subtle hint telling workers to relax and let their minds flow. They even clean the air, enabling staff to stay healthy and think clearly. Plus, they can help cool the spaces around them, trimming the energy costs of building owners and the bottom lines of tenants that much more.

And, with those tenants and their landlords more concerned than ever as to how many of their employees actually will come back once the coronavirus pandemic finally subsides, green walls like these might be part of a game plan to make workers feel more comfy and warmer at work.

“Probably in 2016, was my official introduction to living walls, which I would call ‘active green walls,’” she said. “I worked at a company called Delos, a technology firm and pioneer of the WELL building standard. The whole concept at my previous firm was, ‘How do we bring the outdoors into indoor environments?’ because, as humans, we have evolved an existence for thousands upon thousands of years outdoors. That’s actually our natural habitat. It’s only recently in human history that we’ve moved our entire lives indoors.”

Now, we spend more than 90 percent of our time indoors, and that has a deleterious effect on our health and wellness, Gentile said. So, companies such as Savills have become committed to creating healthy environments for workers, and green walls are part of a general “biophilia” as one of the elements of the firm’s workplace strategy. Biophilia is humankind’s innate attraction to nature.

Living walls are supposed to enhance that by increasing the volume of plant life surrounding the workstations, lounges, conference rooms, even the bathrooms, of modern offices.

It was Gentile, Barlow said, who introduced Savills to the “Naava” wall, made in Finland, in which plants are grown in pods that plug into a wall that extends some three to four inches out from the back wall. When the plants are fully grown in, they almost entirely cover up the black background and create the sense of an entire living, breathing plant environment along what would otherwise be plain, painted space.

The Naava walls cost about $3,000 to $6,000 each, and their boxes self-water, thereby satisfying one of the chief concerns that many a corporate executive has when incorporating greenery into an office setting — who’s going to water all those plants?

And if one pod fails to grow or develop that lush, green healthy color, you just pull the pod and try again. You don’t have to take down the whole wall. The plants grow in a soilless carbon medium that looks like gravel, which means they require less care, Gentile said.

“She said, ‘I have just the thing for you guys,’” Barlow said. “They’re a little expensive, but they do what you want. She deserves all the credit.”

When completed, the Savills North America offices at 399 Park will have 21 green walls, Gentile said. The walls do require maintenance every other week, or once a month, even in these COVID-dominated times, she said.

In a study by Terrapin Bright Green, an environmental consultancy with offices in New York and Washington, better outcomes were tracked for hospitals and prisons which have incorporated biophilic displays. And health care costs can be saved if greenery is incorporated into a workplace, even factoring in upfront and maintenance costs, according to the study.

“In the last 20 years, studies examining the human attraction to nature have yielded convincing evidence that link interactions with nature with positive gains in productivity, increased healing rates and even enhanced learning comprehension, in a wide range of sectors,” the study said. “The monetary gains from providing people access to biophilic design elements produces results ranging from remarkable sales boosts in retail stores, to taxpayer savings stemming from improved student test scores, to safer urban communities.”

Biophilic design principles were incorporated into the design for Apple Inc.’s proposed “Mothership” ring-shaped headquarters in Cupertino, Calif. They can also be found in common spaces at universities across the country — Harvard’s student union in Cambridge, Mass., has a multi-story living wall; and the New Jersey Institute for Food, Nutrition, and Health at Rutgers boasts what it describes as the Garden State’s largest living wall, with more than 5,200 plants.

Michael Coraggio, founding principal of Bordentown, N.J.-based EcoWalls, installer of the Rutgers wall, estimated that that 37-foot-tall installation, which starts in the basement and runs through a cafeteria to the second floor, cost $200 to $250 a square foot.

Not everybody buys into the belief that bringing workers closer to nature produces benefits. Financial Times correspondent Lucy Kellaway referred to it as “hokum.” In an article on the website natureofcities.com, researchers Yannick Joye and Andreas De Block criticize the “sloppiness” of terminology used to support pro-biophilic arguments, and question whether humans are really hardwired to perform better when surrounded by nature.

Nevertheless, both Barlow and Gentile said that Savills clients, including office tenants, are clamoring to learn more about living walls and other means of incorporating plants into office design. An estimated 75 percent of clients of Savills’ workplace team have sought information on wellness or green walls.

“It’s a huge part of every conversation we have with them,” Barlow said.