The amount of available space is at its highest point in decade, as leasing activity halves from pre-pandemic levels 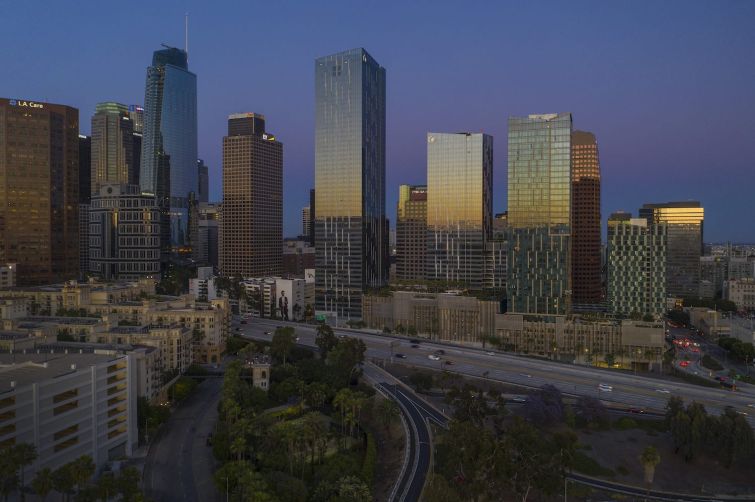 An aerial view shows high-rise buildings, many of which have seen increasing vacancies since Gov. Gavin Newsom ordered Californians to stay home to fight the spread of the coronavirus last year. photo: David McNew/Getty

The spike in available space is largely due to the pandemic-induced influx of sublease space, which jumped almost 91 percent to more than 9 million square feet since the outbreak of coronavirus, according to the report. An active short-term development pipeline is also adding new direct space to the total inventory. Further, “shadow” availability — space which is available but not currently advertised — will be a bigger issue this year.

Savills’ report explains that the current asking rents are elevated and misleading, as landlords will have to be aggressive in securing tenants this year. L.A.’s office market will remain favorable for tenants for at least the next 18-24 months, with downward pressure on rents, and their options at office space will “remain abundant as the market continues to see a rise in both sublease and direct availabilities,” the report said.

Tenant touring increased in the first quarter. As the economy reopens and the vaccine rolls out, leasing demand and activity are expected to follow, although it will resume slowly, the report said. A superfluity of office space has returned to the market in the past year and it will take a long time to work through the supply-demand imbalance. But with pent-up consumer demand and federal stimulus on the way, the overall economy is set to grow significantly in the second half of the year.

The office sector is still handcuffed by restrictions and suffering the pandemic ramifications. Most of California was still under the strictest stay-at-home orders when the quarter started and, even as those have relaxed for other sectors, state guidance maintains that office workers should continue to work remotely to continue controlling the spread of coronavirus.

Surely, many office tenants are thinking about switching to more remote work, even after the full rollout of the vaccine. But major tech and media employers — which bolster L.A.’s market — are reopening their doors soon. For example, Google is bringing employers back this month.

Beyond Meat’s lease at Hackman Capital Partners’ redevelopment in El Segundo led the quarter for largest lease. The County of L.A.’s leases in the South Bay and in Alhambra were its second- and fifth-largest, respectively. Belkin International‘s move to El Segundo was the county’s fourth-largest.

The Burbank media hub, which is home to entertainment companies like Netflix and Disney, has the lowest availability at 7.8 percent. Downtown L.A. is up to 27.7 percent, while Hollywood is up to almost 30 percent availability.

Correction: A previous version of this article incorrectly equated “availability” with the market’s vacancy rate. Rather, available inventory is the sum of sublease space and vacant space.