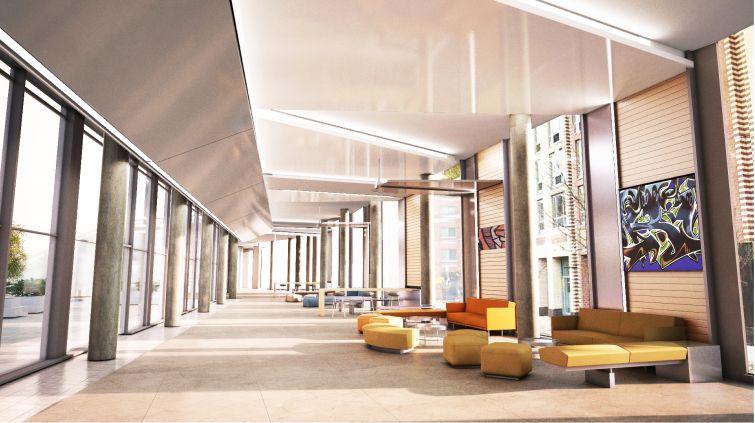 A rendering of the lobby at the Wolkoff family's 5Pointz Towers in Long Island City, Queens. Image: Mojo Stumer

The developer of the 5Pointz project in Long Island City, Queens, the Wolkoff family, landed a $350 million loan for its luxury rental towers, property records show.

The David Wolkoff-led G&W Realty landed the financing from JPMorgan Chase for the 1.3 million-square-foot 5Pointz Towers at 22-44 Jackson Avenue, which will refinance an earlier $300 million construction loan from Bank OZK, The Real Deal first reported.

5Pointz Towers consists of two buildings — one 47 stories and the other 41 stories — with more than 1,100 units. It launched a housing lottery last month for its 337 affordable units, 6sqft reported.

G&W recently nabbed its temporary certificate of occupancy from the city and expects tenants to be able to move in in the coming weeks, TRD reported.

Scott and Andy Singer of The Singer & Bassuk Organization arranged the loan for G&W. The brokers and Wolkoff did not respond to requests for comment.

The site was dubbed 5Pointz in 2002 and became a mecca for graffiti fans trekking to the neighborhood to see murals from renowned street artists. As Long Island City’s real estate values started to climb, the Wolkoffs developed a plan to turn the property into two luxury towers in 2013. That same year, Wolkoff ordered the murals to be whitewashed overnight.

The 23 artists whose works were removed filed a lawsuit in federal court claiming Wolkoff violated the Visual Artists Rights Act. A judge hit Wolkoff with $6.75 million in damages for erasing the work and, despite the developer filing an appeal, the U.S.Supreme Court effectively upheld the decision in October.