The Writing on the Wall: 5Pointz Artists’ Lawsuit Could Prove a Warning to Developers 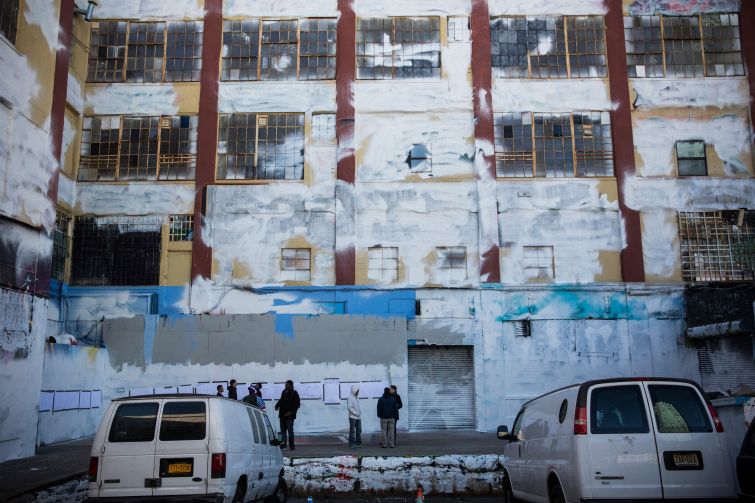 The 5Pointz building in Long Island City after developer Jerry Wolkoff decided to paint over the work of graffiti artists in November 2013. Photo: Andrew Burton/Getty Images

After Marie Flageul found out the walls of New York City’s most prominent site of graffiti art were destroyed she wept inconsolably.

In November 2013, Flageul and her partner Jonathan Cohen, the curator and artist “Meres One,” received a call from a friend at 6:30 a.m. with dire news: The five-story Queens warehouse of artist studios festooned with murals and tags by some of the most renowned street artists in the world had been whitewashed overnight.

“We live in Long Island City. We were there in five minutes,” said Flageul, who helped cultivate the site into a global mecca for graffiti art. Real estate developer Jerry Wolkoff has owned 45-46 Davis Street since the 1970s and began allowing artists to paint the exterior walls of the 200,000 square foot building in the early 1990s. It gained the name 5Pointz in 2002 as artists and street art fans made pilgrimages to admire the works at the Long Island City attraction.

The neighborhood’s real estate values rose during the Bloomberg era and Wolkoff sought to construct two luxury towers on the property. The artists knew about Wolkoff’s long-term plans to convert the site but he had construction workers whitewash their murals overnight without giving artists an opportunity to document their works or remove sections of the wall themselves.

“I cried all day,” Flageul told Commercial Observer. “Meres was just in disbelief. He was standing in front of the building and I was trying to explain something that we could not explain.”

News spread and people started arriving to pay homage. A neighbor who owned a truck repair company on Davis Street offered a gate on his property for anyone who wanted to paint out their frustrations.

“He said ‘Paint what you need.’ That’s how ‘Rest in Power’ happened,” she said. This new mural was an homage to the collection of historic artworks lost in the erasure.

The 23 artists filed a lawsuit in federal court claiming that Wolkoff had violated the Visual Artists Rights Act, which protects public art from being desecrated without the artist’s permission. Wolkoff demolished 5Pointz in August 2014 but the case proceeded.

Following a jury’s recommendation that the graffiti art had inherent value and Wolkoff broke the law by erasing it without warning, Judge Frederic Block awarded the artists $6.7 million in damages in his landmark ruling this February.

Wolkoff vowed to appeal his case to the highest court in the state, the Court of Appeals in Albany. He called the judge’s decision “ridiculous” and still questions what he did wrong.

“I allowed this for 25-plus years and people came to see it, but eventually I knocked it down to build my buildings,” Wolkoff told Commercial Observer. “If I didn’t take this building down, somebody would have gone over these other murals.”

But the 5Pointz artists believe the legal system has finally validated their work.

“This is important for artists because it established value and recognition for the art form,” Flageul said. “Artists who rely on their art to make a living have the right to be respected and protected.”

Art has been interwoven into real estate for as long as people have been constructing buildings—and developers have been at odds with it for nearly as long (including the current president of the United States who, when he was constructing Trump Tower, ordered workers to destroy the Bonwit Teller building’s artwork rather than spend the money to remove it.)

Developers hire architects to apply their artistic vision onto the design of any building and copyright law protects their blueprints in the same way as artwork.

But the 5Pointz ruling showed what happens when developers act in their own interests first without considering the rights of artists, real estate attorneys said.

“The developer not only did not follow the law, he also thumbed his nose at the artists and a federal judge who had denied the artists’ request to preserve the art during the pendency of the lawsuit,” said real estate attorney Steve Wagner, a partner at Wagner Berkow, who is not involved in the case. “The disrespect of the law and the court by the developer is what got him in trouble.”The ruling likely won’t affect properties covered with unauthorized graffiti, attorneys say. Just because an artist puts work on a building doesn’t meant it has copyright protection. At the same time, the decision maintains that public art has inherent value and a private owner can’t remove it without allowing the artist to save or document it.

“You can’t just throw a bunch of paint on it because you own the building,” said art appraiser Renee Vara, who testified in the 5Pointz case as an expert witness. “This gives an artist a lot of recourse.”

But the decision will change how developers work with artists in the future. And if the court of appeals affirms the federal district court’s decision, artists around the country would have a precedent to show that even temporary work like graffiti has cultural and monetary value.

“This is one of the first cases to be decided by the second circuit and you’ll have high level guidance for how these works will be treated that gets into what is art and what isn’t,” said Cole Schotz intellectual property attorney David Gold, who is not involved in the case but is tracking the decision. “The higher up it gets the more powerful it becomes.”

Meanwhile, the size of the district court’s judgment could make developers skittish about letting artists create work on private property in the first place.

“The unintended consequence will be that landowners will no longer make their properties accessible to aerosol artists, at least without clear terms as to their rights to remove or destroy the work at their sole and absolute discretion,” Gold added.

If landlords don’t take the risk of allowing artists to paint on their walls, that means fewer opportunities for artists to gain exposure.

“I’m not sure if artists see the darker ramifications of lost opportunities because some non-professional landlord who may have been open to having new artworks on their properties previously will simply say no,” said Steve Harrington, whose Brooklyn Street Art blog connects artists with opportunities to paint walls throughout the city. The decision may ultimately make developers formalize their relationships with artists in all mediums, which is what artists have been craving anyway.

“You can’t as a developer benefit from someone’s art, create an attractive and interesting location, and then deny the value of the artwork,” Vara said. “And you can’t benefit and denigrate the very thing that brings value to that piece.”

Harrington and others thinks that savvy developers who want to work with artists will end up including a clause in their contracts to ensure they won’t get in trouble if they decide to remove a mural or sell the building to another owner.

“That’s kind of the lesson that’s learned from this,” he said. “The artists wanted to be notified, be included in the conversation in any way.”

Flageul favors tighter contracts so that artists and developers know what arrangement they have upfront. She and her cohort of artists have had fruitful partnerships with other developers in the city, including Related Companies at Hudson Yards. A Related spokeswoman did not return messages about the case or the arrangement.

“There are more cases of collaborations between curators and artists and developers where it will never end in federal court because there is mutual respect,” she said. “If landlords are shy or scared to work with artists based on this case maybe they never wanted to work with artists for the right reasons.”