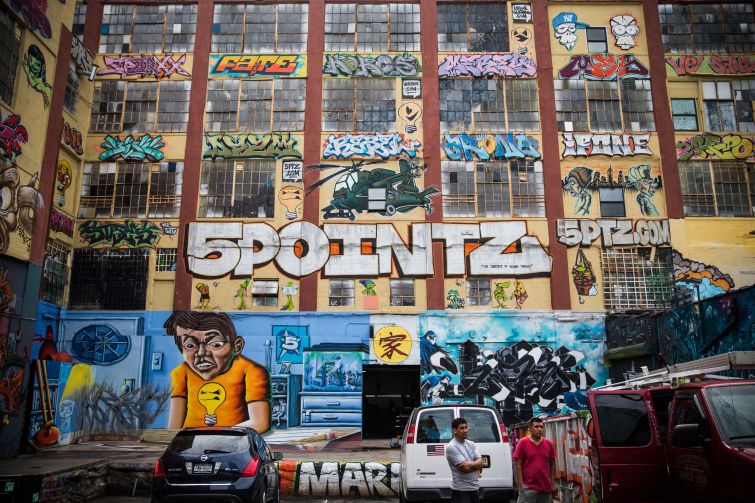 The developers of 5Pointz filed an appeal over the judge's decision to award nearly $7 million in damages for painting over the work of graffiti artists. Photo: Andrew Burton/Getty Images

The developers of the 5Pointz project have filed an appeal over a judge’s decision to hit them with $6.8 million in damages for erasing graffiti artists’ work to build the luxury towers.

Lawyers for Gerald Wolkoff and David Wolkoff argued in the appeal filed on Saturday that since graffiti by its nature is “ephemeral” and painting over by other artists is part of the culture, Judge Frederic Block shouldn’t have ruled whitewashing 21 artists violated the Visual Arts Rights Act.

“We didn’t feel the decision was the correct one,” David Wolkoff told Commercial Observer. “The nature of graffiti in itself is to paint over itself constantly, and [the artists] made reference to that and it’s what happened over the 27 odd years.”

Eric Baum of Eisenberg & Baum, the lawyer representing the 5Pointz artists in the suit, did not respond to requests for comments on the suit but previously lauded the judge’s decision in a statement to CO and expected the appeal to fail.

“This is a precedent-setting decision by the court,” Baum said. “It is a triumph for artists all around the country. The cultural significance of 5Pointz and the value of the aerosol art created by the 21 plaintiffs has been recognized as fine art…The legacy of 5Pointz is now more than just a memory. The owner’s appeal on this fully developed record has no legal or factual basis.”

Gerald Wolkoff bought the five-story warehouse at 45-46 Davis Street for $1.1 million in 1971 and started to allow graffiti artists to spray paint on the exterior walls in the early 1990s after being approached by Jonathan “Meres One” Cohen. The site was dubbed 5Pointz in 2002 and became a mecca for graffiti fans to trek to Long Island City to see murals from renowned street artists.

When the neighborhood’s real estate values started to climb, the Wolkoffs wanted to turn the property into two-luxury towers, called 5Pointz Towers, in 2013 and painted over the murals with white paint overnight.

The developers eventually demolished the warehouse in 2014 but 21 artists whose work was painted over filed a suit claiming it violated the VARA act, which protects public art from being destroyed.

In February, Judge Block ruled in favor of the artists and awarded them $6.7 million in damages—the maximum penalty under VARA—ruling the Wolkoff “acted willfully” in erasing the work and did not have demolition permits so could have waited to paint over the work.

“If not for Wolkoff’s insolence, these damages would not have been assessed,” Block said in his decision. “If he did not destroy 5Pointz until he received his permits and demolished it 10 months later, the Court would not have found that he had acted willfully.

“The whitewash did not end the conflict in one go; the effects lingered for almost a year,” Block said. “The sloppy, half-hearted nature of the whitewashing left the works easily visible under thin layers of cheap, white paint, reminding the plaintiffs on a daily basis what had happened.”

Gerald Wolkoff previously told CO that he whitewashed the pieces overnight after he heard rumors that the artists would create a human barricade around the buildings to protect their work.

“If I had to do it again, I’d have let them stay longer,” he said. “I’d thought I’d get my building permits faster. That’s the only thing I regret. Eventually it had to end. I have two high-rises going up there. There was a purpose for me to whitewash it. It wasn’t malicious at all.”

However, Judge Block said in his ruling that this notion was “fanciful and unfounded” and “belied by the evidence.”

In the appeal, the Wolkoff’s lawyer Meir Feder argued that he did not “willfully” violate the VARA act and the court “abused its discretion” with the judgment.

“The district court’s repeated expressions of its affinity for the works at issue… and its statements that could be viewed as expressing hostility to the defendants, could suggest to a reasonable observer that the court’s impartiality is in question,” Feder said in the appeal.