The Menschy Side of the Wolkoff Clan, Which Has Upset the Apple Cart in Queens and LI 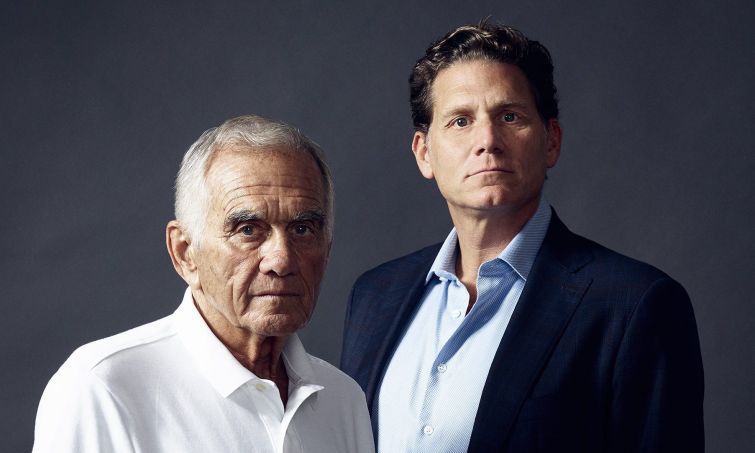 This past December, even before finishing their tuna sandwiches at Premier Diner on Long Island, Richard Daly, the CEO of Broadridge, renewed his lease for 10 more years with landlord Gerald Wolkoff over a handshake.

The pair has been doing business in that manner since the summer of 1992, when they negotiated a lease for 140,000 square feet in the Heartland Business Center in Islip, N.Y., over a four-hour period on a Friday night. A happy tenant, Daly has increased his company’s footprint in the center a number of times to today’s 1 million square feet.

“He is the best expense-side business partner I have,” said Daly, the head of the public global fintech company that provides investor communications and technology-driven solutions to banks, broker-dealers, asset managers and corporate issuers. “I wish I could find a vendor like Jerry in everything else we do.”

Few tenants describe their landlords as menschy as Daly depicted Wolkoff, detailing a number of scenarios where the landlord went far above and beyond the call of duty.

In one case, about a year and a half after Broadridge moved into the 400-acre business park, there was a snowfall that resulted in 40 roof leaks in his space, Daly said. While the lease said that Daly was on the hook for the repairs, Wolkoff replaced the roof come spring because he had assured Daly the roof was in good condition.

In another instance, Daly had Wolkoff pave a parking lot in front of one of his buildings. Shortly after the job was done, Broadridge signed up a large broker-dealer client and needed more space A.S.A.P. The next day, Daly said, “he’s tearing up the parking lot and expanding the building.”

One broker who has worked with Wolkoff, 81—who in the last couple of decades has run the Long Island-based business along with his sons David, 51, and Adam, 49—offered a similar impression of the senior Wolkoff.

Philip Shwom, the president of commercial brokerage Schacker Real Estate Corp. in Long Island, represented the owner in leasing deals for properties across Long Island, including the 900-acre Heartland Business Center. In 2002 he represented Wolkoff in the purchase of Pilgrim Psychiatric Center in Brentwood, N.Y., formerly known as Pilgrim State Hospital, for $20.2 million.

Jerry Wolkoff “hates having tenants upset with him, so he tends to over-deliver, so he builds up a lot of loyalty with his tenants,” Shwom said.

Last week, Shwom had a meeting with Wolkoff on behalf of a tenant at Heartland Business Center, Paramount Beauty Supply. The beauty product supplier decided it wanted to move out so that it could own its own real estate. Shwom represented Paramount in its building purchase and when Paramount needed an extension at Heartland before being able to move into its new digs, it turned to Shwom for help. Wolkoff had already found a replacement tenant for Paramount’s space, but when he learned of Paramount’s conundrum, he told the incoming tenant it would have to postpone moving in.

“Jerry called and said, ‘This guy is with me for 20 years, I can’t throw him out,’ ” Shwom said. “The other tenant said they couldn’t move forward if he didn’t evict him. Jerry lost the deal for that space because he wouldn’t let the guy get hurt.”

In total, the Long Island-based developer owns somewhere between 11 million and 13 million square feet, including five buildings in Queens, one of which is 5Pointz Towers, and has 100-some-odd tenants. All the existing buildings are industrial, David Wolkoff said. They also own Heartland Golf Park in Edgewood, N.Y., near Heartland Business Center. The senior Wolkoff noted that his properties are 99-plus percent rented all the time.

“I have very little vacancy because I believe if you give the people value they will come,” Wolkoff said. “And I’m going to do the same thing in the town that I am building.”

Despite the high praise from Daly and Shwom, Wolkoff has ruffled feathers over two of his current projects: the $4 billion Heartland Town Square at the site of the Pilgrim Psychiatric Center in Brentwood, N.Y. and the $500 million 5Pointz Towers in Long Island City, Queens.

The development of Wolkoff’s ambitiously gargantuan 452-acre Heartland Town Square, master-planned by CallisonRTKL and Elkus Manfredi Architects, has taken over 15 years—during which it dealt with a lawsuit from the school district over rezoning related to the project—to finally get off the ground.

Angie Carpenter, Islip’s town supervisor, said that the town board is charged with approving any zoning changes and while there had been mixed reviews and feelings on the project, in July 2017 the body unanimously approved the first phase of the 30-year project: 3,000-plus residential units and a million square feet of office and retail space. Now Wolkoff is seeking approval from the county for sewer hookup approval.

“It’s what they call a smart growth town—live, work, play,” he said. “The old paradigm of suburbia is dead. Long Island is the founder of suburbia—Levittown. You had a house, a housing complex, and you had to get in your car and you had to go and drive to your shopping center or mall or whatever and then you go and get in your car, go back to your house and drop off [whatever you bought] and then you drive back to your office. Nobody wants that anymore. It’s not working. Not just in Long Island, it’s not working anywhere. People want to get out. They want to walk the streets.”

The developer is targeting millennials and empty-nesters, looking to reverse Long Island’s brain drain and keep both cohorts from leaving the island. To that end the Wolkoffs are beefing up the particularly small rental market in Long Island. Father and son both touted the property’s close proximity to Manhattan—less than an hour by Long Island Rail Road.

The other project that has caused tension is 5Pointz at 22-44 Jackson Avenue.

Wolkoff purchased the former meter factory in 1971 for $1.1 million, he said. Starting in the 1990s, while the inside housed 200 artists’ studios, the exterior became a mural space for graffiti artists after an artist approached Wolkoff looking for sides of buildings to legally graffiti.  The name 5Pointz came from the fact that people from all five boroughs were trekking there to showcase their work. Eventually it became an international destination—that is, until Wolkoff wanted to redevelop the site.

In November of 2013, Wolkoff ordered the famous 5Pointz graffiti murals scrubbed from the five-story warehouse in the middle of the night. “I cried all day,” artist Marie Flaguel told Commercial Observer earlier this year about the incident.

In April 2017, a number of artists whose work had been destroyed filed a federal lawsuit, saying the destruction of the building violated a rarely used 1990 Visual Artists Rights Act, and they were not given a 90-day notice of the removal. This February, a judge slapped Wolkoff with a $6.7 million fine—a ruling which his attorney will appeal later this month, David Wolkoff said.

Jerry Wolkoff said he thought it would be less painful to whitewash the art than tear the building down piece by piece and he felt pressured to do it quickly when there were rumors that the artists were going to create a human barricade around the buildings.

The judge said that Wolkoff was willful and he could have waited to destroy the property for the 10 months it took to acquire his building permits, providing people time to say goodbye to the work.

“If I had to do it again, I’d have let them stay longer,” he said. “I’d thought I’d get my building permits faster. That’s the only thing I regret. Eventually it had to end. I have two high-rises going up there. There was a purpose for me to whitewash it. It wasn’t malicious at all.”

The decision in favor of the artists was hailed by Eric Baum of Eisenberg & Baum, the artists’ attorney in the case, as a real victory.

“This is a precedent-setting decision by the court,” Baum said in a statement to CO. “It is a triumph for artists all around the country. The cultural significance of 5Pointz and the value of the aerosol art created by the 21 plaintiffs has been recognized as fine art…The legacy of 5Pointz is now more than just a memory. The owner’s appeal on this fully developed record has no legal or factual basis.”

But even the whitewashing of the graffiti wasn’t the only headache for Wolkoff at 5Pointz; Wolkoff reportedly promised city officials he would use 100 percent union labor but wound up using some open-shop workers. Building and Construction Trades Council head Gary LaBarbera called Wolkoff “a piece of shit,” at a rally, as reported by Observer, and Queens Councilman Jimmy Van Bramer said, “So, Jerry Wolkoff lied to me…Jerry Wolkoff lied to every single New Yorker.”

At the site now are two HTO Architect-designed rental buildings (Mojo Stumer Associates did the interiors) of 41 and 48 stories each that have been topped out. They span 1.3 million square feet and contain 1,122 units and 50,000 square feet of retail plus, David Wolkoff said, “every amenity known to man.” That will include a residents’ only 10,000-square-foot gym with squash courts, basketball court and swimming pool, golf simulating rooms, a poker room and an adult game room. Father and son both said graffiti would be coming back to the site in a big way, but David Wolkoff said that obviously they would require waivers of the artists in the future. The project is slated for completion in a year and a half, Jerry Wolkoff said.

In a way, Wolkoff—a married high school graduate with a home each in Quogue, N.Y. and Manhattan—is returning to his roots with residential development. After selling his Brooklyn-based floor waxing business at 18, Wolkoff followed his brother into real estate, building houses in Kings County. He claims he was the second largest home builder in Brooklyn in his early 20s, before becoming the largest developer of homes in Staten Island with Heartland Village in the New Springville neighborhood. The Heartland name, David Wolkoff said, comes from the property being in the heart of Staten Island.

Unlike their father, Wolkoff’s Manhattan-born and raised sons are both college educated, with David Wolkoff having gone to Harvard University for undergraduate and Columbia Business School after a stint at Chemical Bank in the real estate department. Adam Wolkoff attended Syracuse University before joining the family business.

While Jerry Wolkoff shows no signs of slowing down—arriving to job sites daily at 6:30 a.m.—David Wolkoff, married with three children, ages 16, 14 and 11, has taken a large role in running the day-to-day operations particularly on their active project sites—Heartland Town Square and 5Pointz Towers. Adam Wolkoff is more in the background, handling property management issues. And Wolkoff senior said he handles a lot of the financials.

Shwom said Wolkoff is a “self-described workaholic” who exemplifies the “American dream story,” having grown up poor and working his way up to become “one of the biggest developers in Long Island history.” He compared him to Mark Cuban on Shark Tank, as the Dallas Mavericks owner “is blunt and he doesn’t pull any punches.” Adam Wolkoff is “creative” with “a really great personality,” Shwom said, and David Wolkoff is the most “polished.”

Daly said that “no one is Jerry [but Jerry]” as “he is one of these bigger-than-life people.” But, he added, “in any conversation with David and Adam over this long relationship, the tone is still the same—’What do we need to do to help you?’ [Collectively] they are a great business partner.”