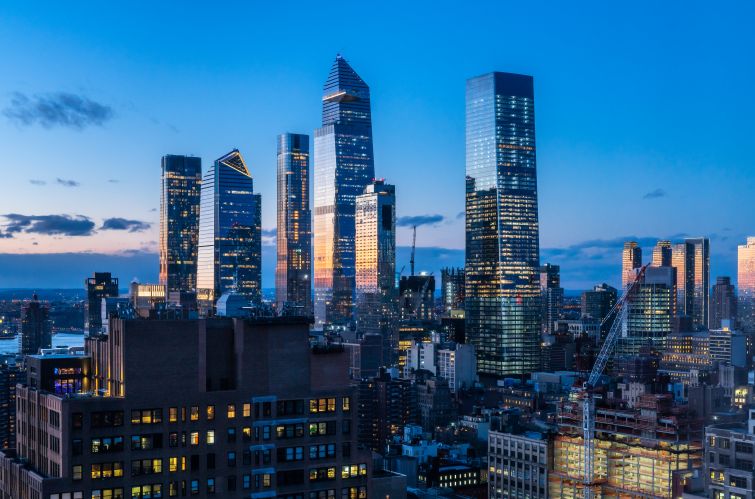 TOUGH FOR TOWERS: Like its Class B and C counterparts, Manhattan’s higher-end office space, including at Hudson Yards, is struggling with much lower demand due to the pandemic. Getty Images

The law firm Ballon Stoll Bader & Nadler got the sort of deal on Manhattan space that tenants both commercial and residential only dream of: free rent for a year.

The legal practice at the start of the year signed an 11-year lease for 6,000 square feet at SL Green Realty Corp.’s 41-story 810 Seventh Avenue, between West 52nd and West 53rd streets. The asking rent was $65 a square foot, and the lease included those 12 months of no rent.

Such sweeteners from landlords are not unusual in Manhattan office deals. The gap between where office rents start in a lease and where they end up after discounts and other incentives grew 22 percentage points from 2008 to the third quarter of 2020, according to brokerage JLL.

But one year gratis in a prime building in a prime spot remains unusual, and was indicative of the state of the borough’s prime office markets as 2021 got going.

“There were a lot of attractive deals in the market, but the building and particular space we selected are top-notch,” Vano Haroutunian, a partner at Ballon Stoll Bader & Nadler, said in a statement on the lease. The firm is relocating from nearby 729 Seventh Avenue after having toured several direct and sublease spaces.

There are plenty of subleases now, due pretty much entirely to the coronavirus pandemic. The contagion emptied offices across Manhattan and has kept them largely empty into the new year, even as the promise of mass vaccinations provides hope that the pandemic will pass sooner rather than later. Most analyses estimate that no more than one-fifth of Manhattan office space is occupied on any given workday.

Meanwhile, more tenants are handing back their space, or at least trying to find out what they can command for it. Tenants added 3.19 million square feet of available sublease space to the Manhattan market in the fourth quarter of 2020, after adding 3.12 million during the third quarter, according to a report from brokerage Colliers International (the charts below are from that report). That brought the share of the Manhattan office market comprised of available sublease space to 24.2 percent of total availability — the highest share since 2009.

Such a trend made 2020 a historically good year for tenants looking for office space. There was simply so much more of it and much, much less competition.

Manhattan office leasing activity dropped 55.9 percent annually in 2020, according to the same Colliers International report. That meant the lowest volume of office leasing — 18.97 million square feet — so far this century. The borough’s availability rate rose 2 percentage points quarterly, to 14.3 percent in the fourth quarter, the highest since spring 2003, in the wake of 9/11 and the (first) dot-com bust.

Such stats underscore just how choppy the Manhattan office leasing market is coming into 2021, given how smooth sailing it seemed coming into the year before.

“Manhattan went from what was, in 2019, one of the strongest years in leasing post-2000 to 2020, a complete reversal and the lowest year of leasing activity so far this century,” Franklin Wallach, senior managing director for Colliers’ tri-state research group, told CO.

The historic drops in leasing activity and the rise in sublease space, coupled with the general economic malaise of a pandemic still not much under control, even as it enters its second year in the U.S., has understandably dragged on Manhattan office rents. Reports show steady slides in asking rents, and taking rents, in many cases, have skidded to the point of unheard-of bargains.

Some sublease space in Midtown, the nation’s premier office district, was asking under $50 a square foot by November, for instance. The average asking rent in Midtown in the fourth quarter of 2020, for comparison, was $82.29 a square foot, down 3 percent from the quarter before, according to Colliers.

The average asking rent in Manhattan overall was $74.39 a square foot. At 3.5 percent, that’s the steepest decline since 2009 — again, in the wake of the Great Recession — and the lowest quarterly average in more than two years. The average Manhattan asking rent was down 6.4 percent, too, from when COVID struck in March 2020 to the end of that year, according to Colliers. It was also down more than 5 percent year over year in 2020.

The asking rent declines shadowed every type of Manhattan office space, according to Colliers, with averages dropping for Class A, B and C space between 2 and 5 percent from the third to fourth quarters of 2020.

The drop in the average Class A asking, to $81.40 a square foot, is particularly noteworthy, given the preponderance of glassy office space added to the Manhattan market through such projects as Hudson Yards and One Vanderbilt. Demand for such top-shelf space typically fuels the figures for the wider office market, but demand there is drastically off.

Again, to underscore the drop from 2019’s heights to 2020’s depths, the 8.8 million feet was the highest volume of Manhattan leases for at least $100 a foot on record. What’s more, 2020’s volume of such deals represented 14.5 percent of total Manhattan leasing activity that year; in 2019, leases for at least $100 a foot represented an incredible 30 percent of deals signed. And, in 2020, 35 Manhattan buildings hosted rents that commanded $100 a foot and up; in 2019, that figure was nearly double.

This would be the part to analyze how things might turn around in 2021. Undoubtedly, this year will see more leasing activity, less sublease space made available and, perhaps, higher asking rents than in 2020, according to CO interviews with analysts, owners and brokers over the past couple of months. That’s more a function, though, of last year’s historic disruption. It’s always darkest before the dawn, etc.

For now, the fate of Manhattan’s underutilized — indeed, unoccupied, in many cases — office space depends on the success of vaccination efforts. On Jan. 19, New York Mayor Bill de Blasio announced that the city was running out of vaccines.

With reporting by Nicholas Rizzi.