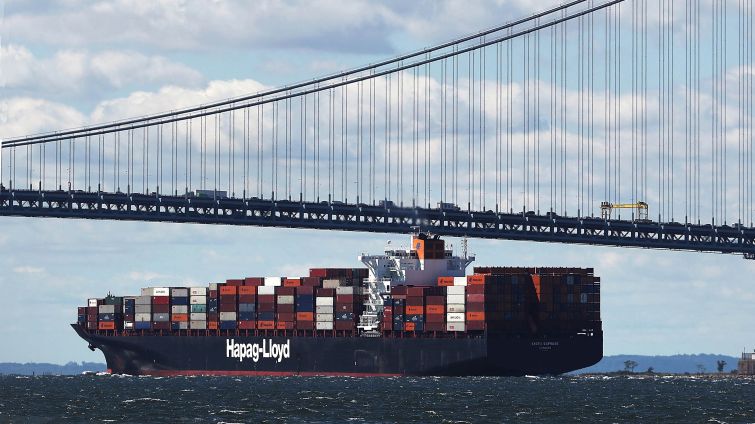 E-commerce's boom during COVID-19 increased the amount of freight flowing through New York City as officials push to reduce the industry's reliance on trucks to move the product. Photo: Spencer Platt/Getty Images

The city that never sleeps also moves a ton of product.

In 2019, 365 million tons of cargo moved through New York City’s streets, rail lines and waterways. And with more and more New Yorkers relying on online ordering for their everyday needs — as they’ve been largely confined to their homes during the coronavirus pandemic — that number’s expected to continue to grow.

That growth, too, comes as the city prepares to hit the gas on a plan to dramatically edge deliveries off the roadways and onto the waterways.

“E-commerce retail activity, which had been growing pre-pandemic, has accelerated during the pandemic,” said Allan Rutter, head of the freight and investment analysis division at Texas A&M Transportation Institute. “All of this e-commerce activity is contracting delivery distancing and warehousing distancing.”

Before the pandemic hit, the city estimated that the amount of cargo flowing through it would balloon to 540 million tons in 2045. While it’s unclear how much COVID-19 would impact that estimate, the Port Authority of New York and New Jersey said it saw record-high cargo volume flow through its ports last year.

“The seaport has probably been the most resilient,” Rick Cotton, executive director of the Port Authority, previously told Commercial Observer. “The supply lines throughout the crisis have proved very, very resilient, which, obviously, is a good thing for the country and the region.”

It’s not just COVID-19 that caused an increase in activity in the city’s ports (the Port Authority’s previous record volume was in 2019). More and more cargo ships have docked in them, instead of their usual spots on the West Coast, as last-mile distribution hubs crop up around the city, Rutter said.

Still, even with the increase in port activity, the bulk majority of the city’s freight travels daily through its clogged and aging roadways.

“We have some of the most congested highway sections in the country and some of the infrastructure is aging,” said Andrew Genn, senior vice president of transportation at the New York City Economic Development Corporation (EDC).

In 2019, trucks carried 89 percent of the cargo moved through the city, according to a report from the New York City Department of Transportation. That led to 125,621 truck crossings per day in Manhattan and 73,583 in Brooklyn.

The EDC estimates that truck traffic congestion could cost the city’s economy $27 billion within the next 30 years. Plus, there are environmental and air quality concerns that come with moving that many trucks through the city’s streets.

To counteract that, the EDC released a $100 million plan in 2018, dubbed Freight NYC, with the goal to move more of that cargo off the city’s streets and onto its waterways and rail lines, similar to the way some European countries move goods.

“We have got to have multi-modal options for shippers,” Genn said. “We have got to start moving towards the use of waterways and, where we can, rail freight. But not all of these fit perfectly well with e-commerce.”

As part of the efforts, the EDC partnered with the Port Authority and several other groups to create the North Atlantic Marine Highway Alliance with the aim to develop plans to use barges to move cargo around. And, in December, the EDC released a request for expression of interest (RFEI) to find maritime companies to activate a potential 14 new ports around the city, including Pier 36 in Manhattan and one on North Henry Street in Greenpoint, Brooklyn.

Still, even as COVID-19 caused a boom in the amount of cargo flowing through the city, it hampered the EDC’s ability to convince companies to sign on to its Freight NYC plan.

“Highways have become less congested, so owners of freight are less inclined to try these new systems,” Genn said. “We’re actively talking to them about when COVID is over, could the end result be that they have a waterway option in the city.”

The EDC planned to have its first Freight NYC pilot program up and running by the end of 2020, but COVID-19 delayed that and the agency expects it to launch sometime this year instead.

The shipping industry has been in talks for years to shift away from moving cargo by trucks to the waters, but they haven’t gotten far in the past because of the traditional limitations of moving freight by ships, said Amit Mokashi, an assistant professor of management at New Jersey City University, who previously worked in the maritime industry.

“If you’re carrying big quantities and time is not a critical factor, then [waterways] tend to do it well,” Mokashi said. “Waterways don’t do the first and last mile, traditionally; you usually need another mode of transportation, which, then, waterways support.”

Waterways have been tapped to great effect during emergencies that impacted other forms of transportation, such as 9/11 or post-Hurricane Sandy, but it lacks the scale for companies to rely on it in similar ways regularly, Mokashi said. While the EDC efforts look to use waterways to move cargo shorter distances, Mokashi said the industry hasn’t rushed toward the idea because of the extra costs involved.

“The more you have to change to other modes of transportation, the more time and more cost associated with it,” he said. “If you’re going to use cranes and people to move between trucks and rail and barge, that’s going to add on to your cost and time.

“If you’re ordering something on Amazon, if it doesn’t say ‘same-day delivery,’ you’re disappointed,” he added. “You want it now.”

And that demand for customers to get their products as soon as possible — which only increased during the pandemic — has caused companies to move their stock closer to the city and rely on trucks to get it to people’s doorsteps faster, Texas A&M’s Rutter said.

“A lot of that warehousing that used to be out in New Jersey or Pennsylvania is moving into the metropolitan proper,” Rutter said. “Most of that activity happens by truck or delivery vehicles because of the quick turnaround and the need for speed.”

Companies have traditionally used trucking to load and unload goods at these warehouses, but the city sees plenty of upsides to lure them toward barges.

There might be an initial cost surge as they shift to barges, but with the rising toll prices and the potential to tap federal grants, the EDC thinks the price could even out or even save some companies money, something the agency hopes to find out during its upcoming pilot program.

Plus, plenty of the city’s last-mile distribution centers are being added to waterfront neighborhoods like Sunset Park and Red Hook in Brooklyn, with thin streets that make it hard for large trucks to move through. (In 2018, the city was forced to move a Citi Bike dock in Red Hook after large trucks kept crashing into it.)

And the waterways aren’t the only thing the city is hoping to tap to ease truck traffic. At the end of 2019, the city launched a six-month pilot program with UPS, DHL and Amazon to allow them to utilize a fleet of cargo bikes to get packages to residents’ doors. A DOT spokesperson told Streetsblog in September that “UPS and DHL have experienced challenges” with the program, and DHL confirmed to the publication their bikes are “inactive.”

The city has also been trying to help companies develop the ability to move their last-mile delivery fleet from gas-guzzling trucks to electric vehicles, and released an RFEI in 2019 to help build up a grid of charging stations for commercial vehicles. Rutter said the industry has been moving toward that goal already and expects the majority of the country’s last-mile fleet to be electric in three to five years.

“A lot of the companies involved, both carriers and shippers, are being compelled or being motivated to do some things to make their supply chains greener,” Rutter said. “A lot of it is being driven as an internal effort. They’ve got sustainability report cards.”

One thing cities have to contend with in this particular shift is the increased strain on energy usage during off-peak times as electric delivery vehicles recharge overnight, Rutter said.

For its part, the city acknowledges the hurdles it faces, as it shifts the freight industry away from its reliance on trucking toward more sustainable methods and is gearing up for the long haul with its Freight NYC plans.

“The problem is no one has done this before in the U.S. at scale,” EDC’s Genn said. “It’ll take years to construct.”