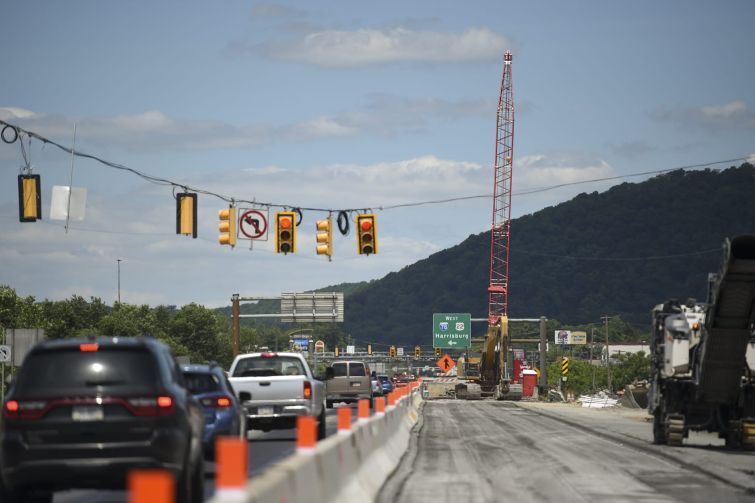 Construction along I-81 in Pennsylvania this summer. The highway runs into I-78 East, which goes to New York City. Getty Images

Want more proof of just how much the coronavirus pandemic has affected the industrial sector? New data on leasing along the densely populated I-81/I-78 corridor from Maryland to New York City shows brisk leasing and record absorption of space over the past 12 months, as consumers flocked to e-commerce in the wake of lockdowns and companies scrambled to meet that demand.

Overall net absorption hit 23.5 million square feet in 2020, 40 percent more than the corridor’s previous record in 2016, according to the data from brokerage Cushman & Wakefield. Vacancy dropped some 190 basis points, from the fourth quarter of 2019, to 7.4 percent, as companies signed 20 million square feet of new leases since March 2020, the month COVID-19 began sweeping the U.S.

This was despite 21.3 million square feet in new inventory in 2020 along the corridor, more than in any year since Cushman & Wakefield began tracking the data in 2004. Being near such a key artery for deliveries of products, apparently, really, really pays — nearly 30 percent of industrial inventory along the I-78/I-81 corridor went up since 2016.

“The I-81 and I-78 distribution corridor has greatly benefited from e-commerce growth,” the brokerage’s research said, “with many companies choosing this market for some of their first distribution centers, given its strategic location and ability to roll out two-day delivery across the East Coast.”

Comparatively, too, the corridor outpaced other major industrial hubs in terms of growth and leasing. Absorption as a percentage of leasing in 2020 was higher along the corridor than in Atlanta (4.1 percent), California’s Inland Empire (3.7 percent), and Dallas-Ft. Worth (3 percent), among other centers, according to Cushman & Wakefield.

One-third of U.S and Canadian consumers are within an 11-hour truck drive of I-81/I-78 from Maryland through Pennsylvania to New York, the brokerage said. That includes 115 million people in 46 million households in such hubs as Washington, D.C.; Baltimore; Charlotte, N.C.; Pittsburgh; Philadelphia; and New York.

Leasing along this interstate corridor is expected to stay strong, even as vaccines roll out and COVID (hopefully) recedes into the rearview.

“With COVID-19 accelerating consumer demand for e-commerce and online goods and services, the need for warehousing space with quick access to multiple population centers is at a premium,” Cushman & Wakefield’s research said. “Healthy demand for space in the I-81 and I-78 distribution corridor will likely continue, as the pandemic has magnified the trends that were driving growth in the market pre-COVID-19.”