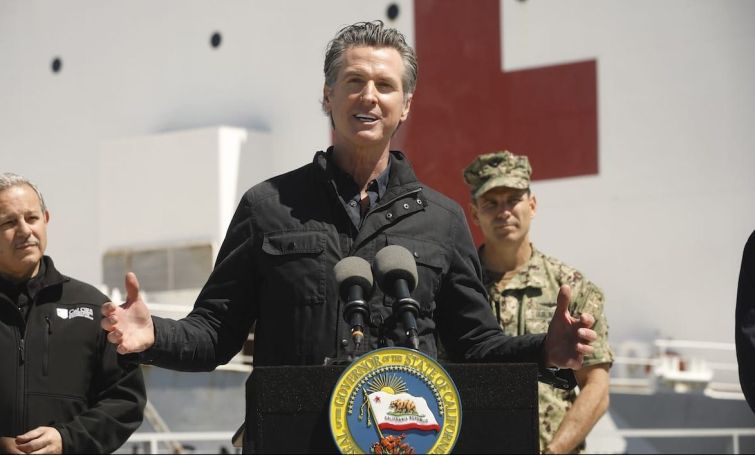 Gov. Gavin Newsom issued the “limited” order that requires nonessential work, movement and gatherings to stop between 10 p.m. and 5 a.m. in counties in the purple tier. That includes Los Angeles County, Orange County and about 94 percent of the state’s population. photo: Carolyn Cole-Pool/Getty Images

Another week, another massively effective vaccine against coronavirus!

On Monday the drugmaker Moderna announced that they had developed a COVID-19 vaccine that is 94.5 percent effective.

We should be doing backflips, right?

Speaking of Cali, the 156,000-square-foot Beverly Hills Saks Fifth Avenue at 9600 Wilshire Boulevard will be foreclosed on, thanks to missed payments by Saks parent Hudson’s Bay.

OK, fine. Let’s turn this around. There was good news coming out of L.A., too. Rexford Industrial announced not one but two warehouse deals for $339 million this week totaling 1.2 million square feet of space.

And Trammell Crow and Clarion signed a production lease at LA North Studios in a 114,000 square foot deal.

What about on the East Coast?

All those sweet, sweet vaccines would not be happening without life sciences space, people! And Commercial Observer looked at a good one this week: a former Chrysler showroom that Taconic and Nuveen purchased last year for $230 million, which they’re turning into lab space on the Far West Side.

This is only a few blocks north from the Helena and VIA 57, two schmancy buildings that were put up by the Durst Organization.

CO got the chance to schmooze with Jody Durst of the legendary New York real estate family about how the company has been getting through the pandemic and the rest of 2020. (It’s not their first; Jody’s grandfather owned real estate in New York during the 1918 flu, too.)

“I’m definitely busier than usual, trying to figure out life,” Durst told CO. “But I think that both the virus and the social unrest that’s going on has made me much more keenly aware — on a city, state and country level — of the divide between the haves and have-nots. I think we, on a personal level and on a corporate level, we have to do more to establish equity.”

Other giants made their voices heard, too, this week. We learned that Amazon remains on a tear; the e-commerce king extended a lease for 211,000 square feet in Brooklyn’s East New York.

And on a smaller stage, we learned that 7-Eleven has leveraged this moment of high real estate anxiety into three new Manhattan leases.

Finally, one last somber note: One of the giants of real estate passed away last week; billionaire developer Sheldon Solow died after a month-long battle with lymphoma at the age of 92.