The ink is barely dry on the Facebook deal, and its already thinking about taking more space.

Vornado Realty Trust reported its second-quarter results a day after closing a 730,000-square-foot lease with Facebook at the Farley Post Office, a deal that proved the social media giant was doubling down on New York, Vornado CEO Steve Roth said on the company’s Tuesday earnings call.

“This commitment is a dramatic statement from one of the most important global tech companies that even in the midst of a pandemic commerce must continue,” Roth said.

But while the deal, in which Facebook will take the entire office portion of the Penn Station development, is a real win for the city, Vornado also cautioned that any rebound in the New York market will be slow, and that Vornado itself is not looking to do any additional leasing at its under-development 2 Penn Plaza for at least another year.

Still, the Farley Post Office deal reinforced that New York is where the big tech companies want to be because of its unparalleled workforce and that companies won’t work from home forever, Roth said.

But with office populations at roughly 8 percent, there’s no doubt that a rebound will be slow for both commercial and retail. “Residential neighborhoods have decent activity and street traffic,” Roth said. “The canyons around commercial buildings not so much.”

Vornado collected 93 percent of its office rents in the second quarter and 72 percent of retail rents, for a combined 88 percent for the entire portfolio. Though, when including agreed rent deferrals, most of which will need to be repaid within a year, that number rises to 94 percent, per the call.

Some of Vornado’s retail locations in New York have been hit by the wave of pandemic-related retail bankruptcies, including the JCPenney location in Herald Square. Roth confirmed that Vornado would consider a last-mile distribution tenant to replace the retailer as that’s the “hottest business” in the country right now, but that there was nothing firm on the table and there was no reason to expect it to be leased quickly. “This will be a long, slow slog,” Roth said in answer to a question from a caller.

On the office side, Roth confirmed that Facebook is in talks to take even more space at its other Vornado location, at 770 Broadway, where it occupies 700,000 square feet. “Facebook has talked to us about growing in that building and taking the entire building,” Roth said, “And those conversations are continuing.”

However, Roth said that talks over a 400,000-square-foot lease at another Vornado development in the Penn Station area were on pause. 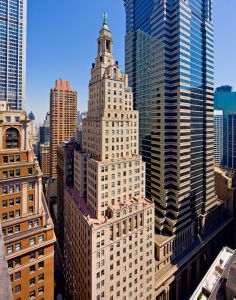