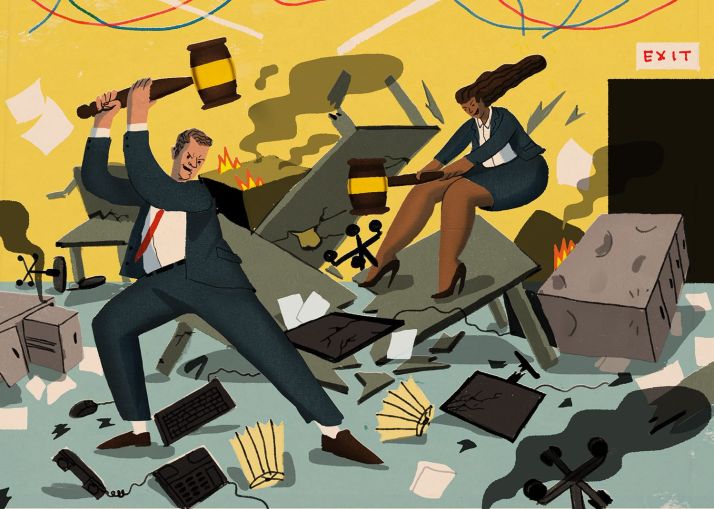 Throw out the law firm office of the past. Illustration By Pablo Iglesias

The vast majority of lawyers in the U.S. want to work mostly in the office for most of the workweek whatever the shift to remote labor caused by the pandemic, according to the results of a survey from architecture and design firm Gensler.

The results come amid profound shifts in the U.S. legal industry. These include major overhauls and rethinks regarding the typical law firm office, particularly the use of separate offices for partners and the need for in-office legal libraries in an increasingly digital age.

What’s more, an influx of millennial attorneys to the nation’s legal ranks has led some firms to embrace collaborative spaces at the expense of designated ones; and to embrace hoteling, where reservations replace assigned seating.

A lot of this has led to a kind of densification of the U.S. law office, with space allocated per attorney tumbling in recent years. In 19 North American markets, in fact, that space fell 5.9 percent from 2017 to 2019, to 836 square feet on average, according to a Colliers International survey. The average amount of space for partners at the top of the private legal pyramid also fell—6.3 percent, to 1,825 square feet.

The Gensler survey results, though, would seem to suggest that for all the densification and shift to remote work of recent years—and the swelling ranks of younger lawyers used to online socialization and more fluid physical arrangements—a lot of attorneys just simply want back into the office. The survey went only to those in firms with at least 100 employees and to those who were working in an office pre-COVID.

The top reason that lawyers gave for wanting to return was that they missed impromptu face-to-face interaction—57 percent listed this as a reason. The second most cited reason, chosen by 51 percent of respondents, was having scheduled meetings with colleagues; and the third biggest was socializing with those same coworkers. Having scheduled meetings with clients was also a major reason for wanting to return.

But these lawyers don’t just want to pour back into their old conference rooms and cubicles. A near-majority—45 percent—would like their offices cleaned more; and 38 percent want air-purification systems installed.

The Gensler survey also found that a majority of respondents want stricter policies preventing workers from coming in sick and greater flexibility when it comes to the need to work from home because of the risk of COVID-19. Gensler itself says it is working with firms to redesign offices for more flexible schedules, said Timothy Bromiley, a principal at the company and its legal leader. Part of this is due to the pandemic, and part is due to that years-long trend of densification.

“Leaning into mobility will allow them to permanently build a more flexible culture and reap significant space savings,” he said over email.

Interestingly, the pandemic-related results are not all that different from what Gensler has found in 15 years of regularly surveying lawyers about their workplaces. Generally, about three-fourths of attorneys who have a choice come into the office and only 11 percent choose to work from home. Maybe that majority just hasn’t found what works yet for working from home.