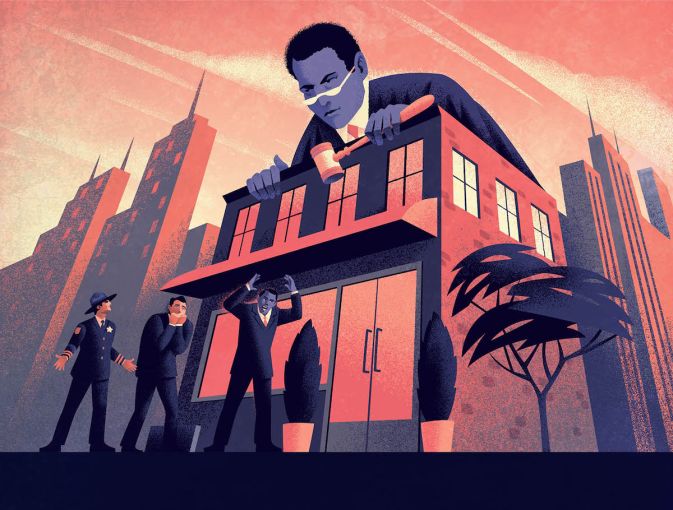 All eviction proceedings have been suspended throughout California since April. ILLUSTRATION: JEFF CUYUBAMBA/Commercial Observer

And that was back in the good days.

After California Gov. Gavin Newsom declared a state of emergency for the global pandemic, he allowed municipalities to enact moratoriums on commercial evictions for tenants who can’t pay rent, and many local lawmakers rushed to do exactly that. Now, more than three months later, those moratoria are still in place, and the ones about to expire are being extended.

Newsom recently extended his order, and the Los Angeles County Board of Supervisors recently extended its moratorium on commercial evictions until July 31. Meanwhile, the city of L.A.’s moratorium gives tenants three months after the expiration of the local emergency to repay past due rent. Beverly Hills, Burbank, Culver City, Long Beach, Glendale, Pasadena, and dozens of other cities have also enacted similar ordinances.

While there is no statewide moratorium for commercial tenants, all eviction proceedings have been suspended throughout California since April. Last month, the state’s Judicial Council planned to vote on ending that suspension by August, but they delayed the vote after talking with Newsom and other lawmakers. A spokesperson for the council said there have been no new talks of updating the suspension since.

Tenant advocates and small business owners warn that an apocalyptic wave of closures awaits California once the moratoriums end. But industry experts told Commercial Observer that’s not the case, and that landlords will struggle if rent deferrals continue.

Brian Kang, chairman of the real estate group at Greenberg Glusker, said he doesn’t expect a flood of evictions because it isn’t a practical solution for landlords to deal with the current backlog in the courts.

“Unlawful detainers usually take about 30, 45, to 60 days,” Kang said. “And there’s going to be an avalanche of those cases if landlords choose to file them, it’s just going to take forever. You’re looking at a two-to-three year timeframe just to really get the litigation going.”

Steve Lurie, a partner at Greenberg Glusker, said landlords are inclined to negotiate changes in leases because of the moratoriums, and because landlords want to keep their space filled.

“The idea that landlords are just going to terminate all these leases, and you’re gonna have vacancies across the landscape — it’s hard to believe that,” he said. “I think landlords are going to work in their own interests, which is keeping tenants. Landlords don’t want vacancies and the associated downtime, and the brokerage commissions and re-rent and new tenant improvement allowances.”

However, many landlords have been frustrated that they are unable to address tenants refusing to pay rent even when they have solid cash flow. The moratorium in L.A. does not apply to property leased by multinational or publicly traded companies, or companies with more than 500 employees. But landlords are filing lawsuits against nationwide chain tenants for missing rent through the pandemic.

“There are a lot of the national tenants who just told my clients, “Yeah, we’re not paying any rent,” said Andrew Starrels, a partner with Holland & Knight. “And that’s going to lead to some interesting negotiations later, because a lot of those retailers have thriving online practices.”

Lurie said his office also has a few cases where tenants were in default before the pandemic hit, “and have used this moratorium to avoid getting evicted.”

“They’ve taken advantage of the situation and it’s really been hard on landlords who rightfully wanted their properties back from a non-paying tenant that had nothing to do with a pandemic,” he said.

Starrels said most landlords don’t have a problem with the idea of an eviction moratorium if policymakers address those kinds of issues and set a timeframe, rather than tying them to declared states of emergency. He said there will be some inevitable evictions and vacancies stemming from the economic downturn, but not a flood.

“Maybe it’s in between flood and drought,” he said. “There are going to be some businesses that have existential problems with reopening and keeping their customers and employees there [with social distancing mandates and capacity restrictions].”

“I don’t think it’s going to be this vast wasteland and there’s going to be no stores left,” Mayer said. “I think there will be some vacancies. And we expect that there’ll be more store closures than ever before…But I don’t see this as every store is going to close.”

Jennifer Frisk, a director at Newmark Knight Frank’s office in Downtown L.A., also said they do not expect an overwhelming wave of evictions.

“As this virus has demonstrated, there are a lot of unknowns coming through the end of the year,” Frisk said. “If landlords evict, there is a much smaller pool of tenants in the market that are actively looking for space. Landlords may get more aggressive with rent deferral recovery, or unpaid rent recovery, and there will most likely be significantly more tenant sublease space, but not necessarily evictions.”

Starrels said he sees most tenants and landlords working out lease amendments, rent deferrals, or abatements to help tenants. And, “for the most part,” lenders are being patient with landlords.

“But at some point, because they tend to be regulated entities, that patience is going to run out,” he said. “That’s going to be a problem, and that’s what a lot of them are worried about. But, until we really see what’s going on with reopening the rest of the economy, it’s really hard to pick what the right time frame is.”

Kang said as shelter-in-place orders continue, it will be more difficult to negotiate for longer-term agreements.

“They may have had a temporary agreement for about three months as to how to help each other. But if [the pandemic] continues and maybe gets worse in the fall, I think that’s where tenants and landlords are unsure about how to deal with this for a longer time period.”