The deal with Hudson Pacific includes a 2.2-million-square-foot sound stage and office portfolio and rights to build out an additional 1.1 million square feet 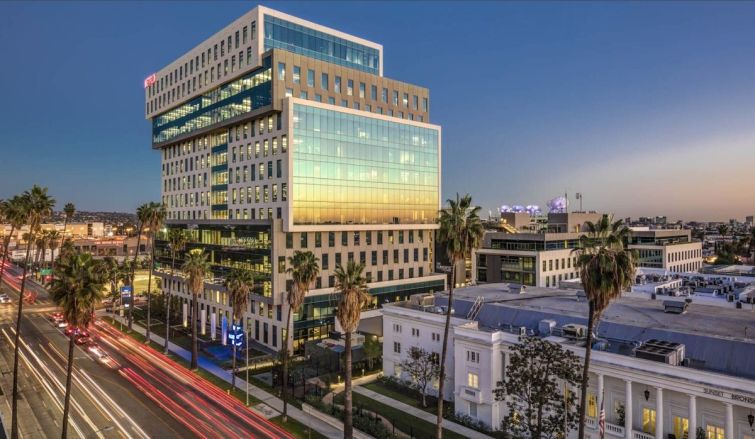 The portfolio includes the ICON building, which is leased to Netflix, at Sunset Bronson Studios in the heart of Hollywood. Photo: Hudson Pacific Properties

Blackstone is purchasing a 49 percent stake from Hudson Pacific Properties on a $1.65 billion, 2.2-million-square foot portfolio of sound stages and adjacent office space in Los Angeles.

The announcement comes after Commercial Observer reported Blackstone was said to be in talks to recapitalize the three studios.

Netflix is the portfolio’s largest tenant with more than 700,000 square feet of office space, in addition to its long-term deals for stages, according to the announcement. Hudson will retain a 51 percent ownership, and remain responsible for day-to-day operations, leasing and development.

The deal includes the rights to build another 1.1 million square feet of office and production space at Sunset Gower and Sunset Las Palmas Studios. The firms announced that the partnership will also look for future studio acquisitions in Los Angeles and other key markets.

The portfolio also features 966,000 square feet across five office properties that Hudson has developed on or adjacent to the lots, including 6040 Sunset, ICON, CUE, EPIC and the soon-to-be-completed Harlow development.

“Hudson Pacific has been at the forefront of Hollywood’s renaissance for more than a decade,” said Victor Coleman, Hudson Pacific’s chairman and CEO, in a statement. “Our latest joint venture with Blackstone unlocks a portion of the value we’ve created for our shareholders and provides us with significant capital to grow both our studio and office portfolios, including the build-out of additional development rights at our existing studios.”

Hudson, a real estate investment trust, claims to be L.A.’s largest independent owner and operator of sound stages. The firm’s agreement with Blackstone was one of two blockbuster deals involving production space that made headlines in the past week, and one of the most significant deals completed since the coronavirus pandemic devastated the commercial real estate markets.

CO also recently broke the news that Hackman Capital Partners — another premier operator of studio space based in L.A. — and Square Mile Capital Management are working out an arrangement to acquire Silvercup Studios, which is New York City’s largest production studio, for around $500 million. Less than a year ago, Hackman teamed up with Square Mile to acquire the MBS Group portfolio, which included Manhattan Beach Studios, for $650 million.

Blackstone, one of the nation’s premier investment firms and largest property owners, is behind some of the world’s top portfolios that cover everything from industrial and multifamily assets to the iconic resorts in Las Vegas. The joint venture with Hudson signifies a major bet on the growing demand for content production space as consumers move increasingly toward streaming services.

“Our business is driven by investing thematically in sectors with powerful secular tailwinds, and there is no better example of that than content creation in L.A.,” said Ken Caplan, global co-head of Blackstone Real Estate, in a statement.

Executives with Hudson have said they expect most studios to expand their schedules to seven-day per week due to pent-up demand for film production space and sound studios.

“Our team has been reached out to by virtually every production company saying ‘we need office space and we need studio space,’” Coleman said during Hudson’s earnings call in May. “The demand is going to be voracious.”

Blackstone and Hudson have previously teamed up on the $3.5 billion purchase of the former Equity Office Properties San Francisco Peninsula and Silicon Valley office portfolio in 2015, and the joint venture purchase of the 1.5 million-square-foot Bentall Centre in Vancouver, Canada in 2019.