The Latigo Group has locked in $59 million in construction financing for a 152,000-square-foot multifamily development in West Covina. 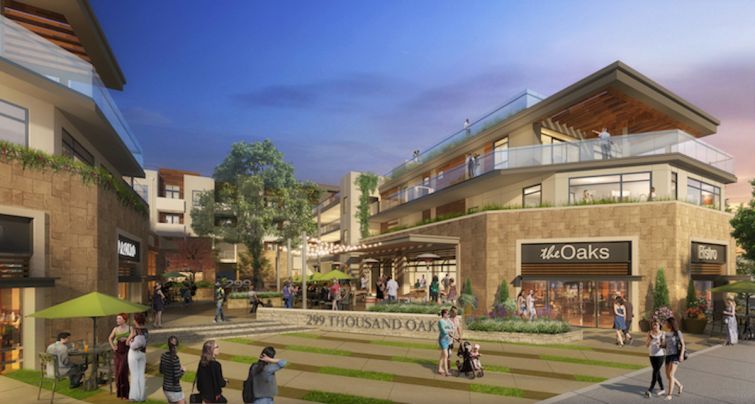 Latigo has started work on the project at 299 East Thousand Oaks Boulevard, which will be the first significant multifamily project in Thousand Oaks since 2007. photo: Latigo

The Latigo Group has locked in $59 million in construction financing for a 152,000-square-foot multifamily development in the northwestern part of Greater Los Angeles, according to Dekel Capital, which arranged and announced the funding.

Dekel said the financing was provided by a publicly traded real estate investment trust and a life insurance company, but declined to reveal the names of the lenders. Public financing records show Principal Life Insurance Company provided at least $39 million for the development.

Latigo has started work on the project at 299 East Thousand Oaks Boulevard, which will be the first significant multifamily project in Thousand Oaks since 2007. When it’s complete in 2022, the 3.2-acre site will include 142 units, 9,820 square feet of ground-level retail for restaurant space and a coffee shop, and parking for 239 vehicles. Eleven of the units will be designated as affordable for low-income households.

The four-story property will include studio, one- and two-bedroom units, as well as a 3,000-square-foot fitness center, pool and garden courtyards, and open space. The project was designed by KTGY Architecture + Planning. It was approved by the city of Thousand Oaks in August 2018

Latigo purchased the site in January for $7.9 million from an entity named GML Enterprises, LLC, which is managed by Tim Devine, property records show.

“The lack of housing construction in Thousand Oaks over the last decade has led to a notable supply/demand imbalance,” said Dekel principal Shlomi Ronen, who arranged the financing, in a statement.

Construction has been deemed essential within the state’s stay-at-home orders so as not to worsen California’s years-long housing crisis. Ronen added that Latigo is protecting workers from the spread of coronavirus by adhering to local and state guidance for construction sites “in order to address this housing need as soon as possible.”

The project site falls within the Thousand Oaks Boulevard Specific Plan — a  3.5-mile mixed-use district between Duesenberg Drive and Moorpark Road. It is also located near the 1.3 million-square-foot regional shopping center The Oaks Mall and the Thousand Oaks Civic Arts Plaza.

L.A.-based Latigo Group is a privately owned investment and development firm specializing in multifamily, mixed-use, and student housing properties throughout the country.