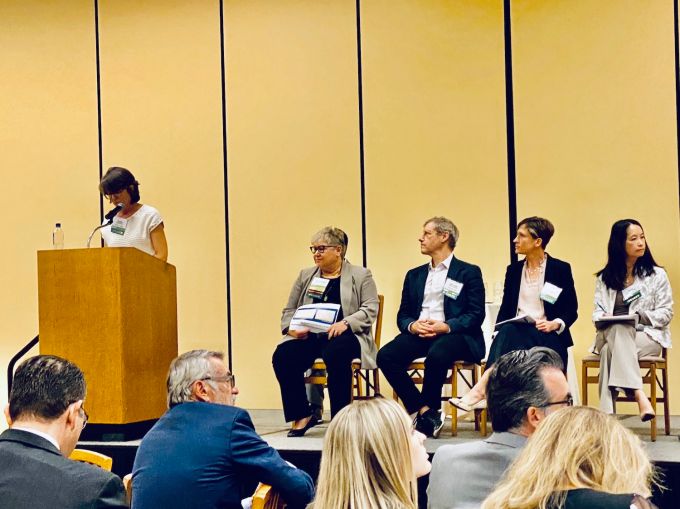 The affordability and homelessness crisis in California continues to exacerbate and compound resources, as construction costs, regulatory hurdles and corresponding rent increase and availability and production decrease.

According to the homeless count last year, the city of Los Angeles saw the homeless population jump 16 percent to an estimated 36,165 individuals. Developers, investors and real estate experts convened at a ULI conference in Downtown L.A. last week to discuss their roles in addressing the issue, and the challenges and barriers to the production of affordable housing, permanent supportive housing, and homeless shelters.

Dora Leong Gallo is president and CEO of the nonprofit developer A Community of Friends, which specifically houses people with mental health issues. She explained that the financing, the people served, and the opposition to supportive housing developments are different from what market-rate developers typically deal with. Most of those issues stem from the very reason people are homeless in the first place: They don’t have a steady income to pay rent. Developers of supportive housing then need to find a way to make up for that lost revenue to keep a building operational, especially when it includes on-site services.

“We need three funding sources — for construction, the operations and the services,” Leong Gallo said while speaking on a panel regarding the land use and financing challenges of creating supply. “We have to secure all of that before we start construction. We can’t start without all the other parts in place. And all these funding sources have different application cycles.”

Even when developers can corral appropriate funding for supportive housing projects, they almost always run into neighborhood opposition. In the past few years, proposed projects for homeless people in neighborhoods like Venice, Koreatown, Sherman Oaks and throughout the city were either stalled or stopped due to rampant protests from local community members.

“We get opposition because of who we serve,” Leong Gallo said. “Of the three biggest challenges we have in developing permanent supportive housing, community opposition is number one — can’t get away from that.”

After 17 years with A Community of Friends, Leong Gallo has personally been involved in almost 50 supportive housing projects.

That opposition translates into more time for the developer to work with communities and elected officials, which means the project will be more expensive and take longer to complete.

David Waite, a partner at Cox, Castle and Nicholson LLP, told Commercial Observer how complex it can be addressing the different needs of the crisis, and how the unique challenges vary between short-term shelters and longer-term supportive housing. Temporary shelters address the immediacy of the issue, and are typically larger and designed to accommodate more people.

“They produce their own land-use challenges from the standpoint of neighborhood opposition to those kinds of facilities,” he said. “There is strident opposition to them because the neighborhood is concerned that they will become a magnet for more people coming into their geographic region.”

“They still have the transaction impediment that they are extremely expensive to build,” Waite said. “They have a very complicated capital stack, and those projects typically have a two- to three-year timeline to actually bring product to the market … It probably is a more certain path on entitlement, but it has a more complicated path in terms of construction cost and capital stack and financing and all the transaction issues associated with getting everything to line up.”

Opposition from neighborhood groups frequently includes the weaponization of the California Environmental Quality Act (CEQA), which was enacted 50 years ago. The law requires developers to complete environmental impact reports for any project that requires height or zoning variances or includes high density. That report often takes two years to complete, and afterward, any individual is allowed to challenge and appeal the development via CEQA, which can delay projects by years at a time.

“Many of the people in the communities who do not support supportive housing development are using CEQA as a tool to stop projects,” Leong Gallo said. “It doesn’t matter that, at public meetings, all they talk about is how people who are homeless and mentally ill are moving to their neighborhood, and that they’re concerned for their children and neighbors — it doesn’t matter that that’s what they said. When they file the paperwork to stop it, it’s about air quality and noise and aesthetics.”

Angie Brooks, managing principal for architecture firm Brooks + Scarpa, discussed other innate challenges in L.A., including unique zoning limitations. She pointed to Proposition U, which was approved by voters in 1986 and down-zoned allowable height and size in more than 70 percent of the city, further restricting the ability to build affordable multifamily projects.

“We cannot build multifamily housing by-right in most places where it needs to go currently,” she said, on the panel with Leong Gallo. “So, that means it needs to go through entitlements and approvals, which takes years. And basically, a lot of times, what happens is we end up down-zoning and reducing the project because of community opposition.”

She said one recent project took 3.5 years to secure entitlements because it was not allowed by right. She said those increased restrictions, including transitional height requirements, need to change to address the crisis, and that the city needs to repeal Proposition U and allow more development near public transit stops.

“In that 3.5 years, my program has changed, codes have changed, the owner wants a change, but now we have our approval,” she said. “So, it’s not a good model to incentivize people to build housing … I think that this is protecting the wealthy at the expense of the community.”

Waite said even if the city can produce the needed supportive housing units and temporary shelters, it won’t stop the flow of people becoming homeless in the first place, which stems from the lack of available affordable housing.

“We have too many people living paycheck to paycheck who, based upon an incident of financial upset, can find themselves on the street in a very quick amount of time,” he said. “Even if you start tackling the temporary shelter problems or permanent supportive housing, you never start solving the problem that two people are coming into homelessness for every one person we are bringing out of homelessness until you start to solve the affordable housing crisis.”

At the ULI conference, Michael Parks, president and CEO of Flyaway Homes, said the issue is not that they don’t know how to address the crisis.