Coronavirus Will Cause a ‘Big Rethink’ in University Construction, Panelists Say 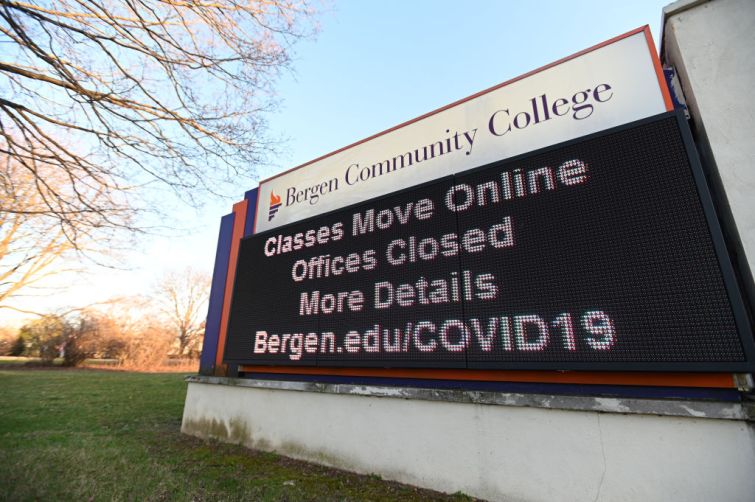 Colleges across the country were forced to closed their dormitories because of the coronavirus epidemic and switch to online learning, which will cause a big "rethink" in university construction, panelists said. Photo: Mike Coppola/Getty Images

Dormitories emptied because of the coronavirus epidemic has caused cash-flow problems to universities in the United States and as more students get used to online learning, colleges will have a “rethink” on the design of its spaces in the future, panelists said.

Experts who spoke on Commercial Observer’s fourth annual Higher Education Construction forum — held through video chat because of COVID-19 — said the fallout from the global pandemic will lead universities around the country to evaluate how its spaces are designed and used even more than usual because of this.

“I think we’re heading for a big rethink coming out of this,” said Molly McGowan — a management partner at Ennead Architects which has designed facilities for New York University, Stanford University, Barnard College and Princeton University — during the first panel. “There’s an expectation of a drop in students who are going to be enrolling this fall either because of financial reasons or because they want to take a gap year, we are going to need that. We are going to need to consider the utilization of campuses.”

One of the issues is going to be simply starting projects. Universities generally have long-term financial plans for construction, but the coronavirus impact has thrown everything up in the air and added another level of uncertainty.

“We have some major capital projects in the pipeline,” said Gilbert Delgado, the associate vice president of design and construction facilities management for Northeastern University in Boston. “We’re hearing everything from there’ll be opportunities for good buyouts in the next several months because we might be one of the few builders that is ready to go, or there might be severe material and equipment shortages, which we’re already experiencing.”

“We also have to face the reality that with the dormitories being empty we have a serious cashflow problem,” Delgado added. “We’re trying to put our arms around that now and hopefully in the next week or so we’ll have a much better handle.”

Delgado and McGowan spoke on the first panel of the day — moderated by Ingram Yuzek Gainen Carroll & Bertolotti’s Robert Banner — along with Cornell Tech’s director of design and construction Diana Allegretti and Suffolk Construction’s vice president of operations Matthew Miller.

People have already started to reconsider plans that were nearly ready to issue requests for proposals (RFP) to get projects off the ground and have reached out to construction firms earlier than usual on them, Miller said.

“We’ve actually had a few clients reach out to us in just the last couple of days — and these might be projects that are about to go through an RFP process — but they’ve actually asked to engage us early and do some early schematic design-type budget estimates,” he said. “Just to get a sense of whether or not this project is viable and is going to fit in with their long-term capital plan.”

Even amidst all the uncertainty and chaos, clearing out the dorms may have some small benefits for some universities. Jo Goldberger, an assistant vice president of design and construction at The New School, said during the third panel that it might give the college more time to do demolition work for renovations since they usually have to wait for students to clear out during the summer to start.

“We’re looking at this as a possible opportunity, fingers crossed, that work can begin in the next few weeks,” Goldberger said. “Which would actually extend our period of construction for these summer projects, to provide a little bit more cushion than we normally never have.”

But still, with everybody working remotely it’s been hard to finalize the details on projects, Goldberger added.

“I feel that we’re pushing a big boulder up a cliff,” she said. “It takes longer to make the decisions made because of the types of meetings — Zoom meetings — and not all meetings can happen on the day because of people’s personal issues, so it makes it complex.”

And universities also have to contend with government regulations to stem the spread of COVID-19 for their building plans. Last week, Cambridge, Mass., officials froze all construction activity in the city for an indefinite amount of time, throwing uncertainty until when the Massachusetts Institute of Technology (MIT) can start projects.

“The restart time, once we get the all-clear, is going to be tricky,” said William Colehower, MIT’s director of project planning. “We have implied impacts on budgets and schedules that are really going to be hard to get our hands around right away, but in a few weeks I’m sure that we’re going to begin to understand the cost of this.”

Some panelists expect the design of offices and classrooms space to be questioned over the potential health impact the layout and mechanicals can have in spreading a disease similar to COVID-19, which can be a struggle to align with the need to reduce college’s carbon footprint.

“We’re right now pressed up against the wall to hit our greenhouse gas targets and reduce ventilation rates,” Colehower said. “If we’re at the same time asked to increase them to keep our buildings safer, I just see there’s an interesting dynamic that’s presenting itself here that’s going to force the most senior leaders at our institutions to choose those priorities.”

All three discussions touched on the likelihood of more colleges switching to online-only classes in the future, since teachers were forced to because of the coronavirus.

Some said they expect to offer more in the future because a growing number of professors will become more comfortable with the tools needed to run remote learning classes, but every panelist stressed the importance of campus life.

“The principles that guide our Princeton traditional education process are ones of community and ones of providing an environment where students can interact,” said Sean Joyner, the deputy director for Princeton University’s office of capital projects, during the second panel moderated by Grassi’s Robert Brewer which included DASNY’s Paul Koopman and Sciame Construction’s Joseph Mizzi. “That sort of overrides any distance learning.”

Colehower said MIT’s focus on research on both the undergraduate and above would make it impossible to switch to an entirely online learning experience.

“We need to continue to support labs, which is extremely difficult to do in a virtual environment,” he said. “We’re probably not going to be able to adapt much of the research side of things at MIT to support that.”

And Ingram Yuzek Gainen Carroll & Bertolotti’s Banner was direct over his feelings, campus life must remain for students.

“You’re going to need to have the campus remain a very special place where people can interact, students can interact, faculty can interact,” Banner said. “It can’t just be remote, we would lose so much.”