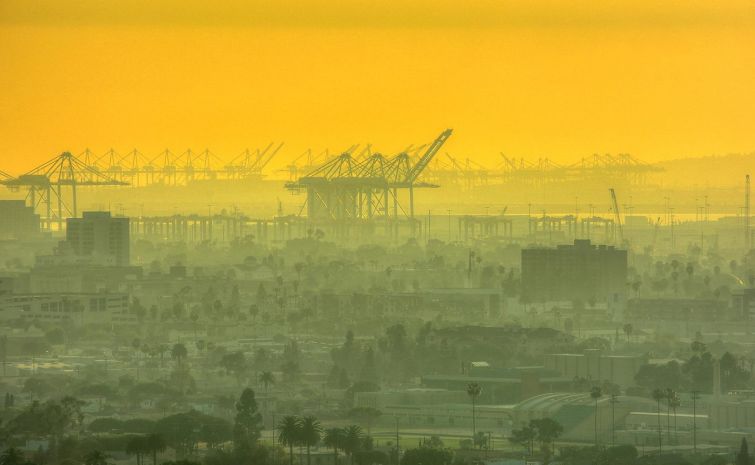 The Port of Los Angeles is the largest in the Western Hemisphere. photo: Wikimedia Commons

The rapid spread and growing fear of the novel coronavirus is disrupting financial markets and devastating the industries that commercial real estate depend on.

The fallout is starkly displayed at the ports of Los Angeles and Long Beach — the two largest in the Western Hemisphere — as fewer and fewer shipments arrive. The United States depends on China for about 30 percent of all the materials and goods that are needed for both residential and commercial development, making the country the largest supplier of such material, according to Dodge Data & Analytics, which tracks the construction industry.

With factories in China operating at about 40 percent capacity, the Port of L.A. announced today that all shipments dropped 23 percent in February compared to last year, with declines expected to continue through March. There is also a massive backup of empty containers left behind, and filled export containers that were delayed because of decreasing demand in Asia.

“As factory production in China remains at low levels, we expect soft volumes in March,” said executive director Gene Seroka, in a statement. “We will need to return empty containers to Asia and push lingering U.S. export boxes out swiftly. We’re actively working with our supply chain partners to be prepared for a cargo surge once production levels ramp up.”

Phillip Sanfield, a spokesman for the Port of L.A., told Commercial Observer there have been about 40 shipment cancellations so far this quarter. The port averages about 15 cancellations for the full first quarter.

“More than half of the cargo received at the Port of L.A. comes from China alone, so you can see how significant this is for us,” he said.

The Port of Long Beach, which also does most of its trade with China, is expected to release its February figures soon. For now, the overall activity is pegged to have declined about 10 percent, said Lee Peterson, the port’s media relations manager.

“There are no longer warehouses stocked with inventory in the United States awaiting customers,” Ronen said. “We have become so dependent on China for production, it’s unclear if the U.S. manufacturing industry can produce the materials needed in lieu of Chinese imports.”

Cost overruns due to the coronavirus crisis could possibly qualify as a force majeure event caused by an unavoidable disaster, which means that contractors may no longer be liable, and any schedule delays or cost increases attributed to the virus may fall on developers, as CO reported.

Marcus & Millichap reported Monday that a new recession is not imminent, but the virus will slow economic growth in the first quarter due to weaker exports, lower tourism, and supply-chain shortfalls. The current low unemployment and strong consumption will offset headwinds unless the outbreak amplifies significantly, the report explained.

As more cases are confirmed around the world, the hotel sector will likely experience the largest impact, with businesses and tourists canceling or postponing travel plans and major events and conferences.

By the time of a fourth-quarter earnings call in February, Braemar Hotel & Resorts Inc. reported $80,000 in lost revenue tied directly to fallout from the outbreak around the world. However, CEO Richard Stockton told CO there could be a financial opportunity in the wake of potential overreaction. Stockton worked for Morgan Stanley from 1997 to 2012, including three years in Asia. He said in the wake of SARS, there were some very attractive investment opportunities that they monetized years later “for some of the greatest profits of anywhere in the global portfolio.”

“There will inevitably be some sort of overreaction in terms of pricing opportunity, whether it’s for the stock market or for hard assets,” he said.

In the industrial sector, distribution hubs like the Inland Empire may face some softening in the wake of coronavirus as a wave of big-box warehouse development enters the market, according to Marcus & Millichap. Some companies may postpone commitments for large space blocks at major facilities as they cautiously monitor the economic outlook for the supply chain.

Product shortages could weigh on retail performance, while canceled trips and events, as well as more direction to avoid contact with others, could hamper performance for restaurant space, entertainment venues and fitness facilities, as well as retail locations in tourist destinations, as CO reported. Some companies may hold off on expansion plans, which will weigh on short-term absorption, according to the Marcus & Millichap report.