The New Normal: Real Estate Settles In for a Coronavirus Disruption 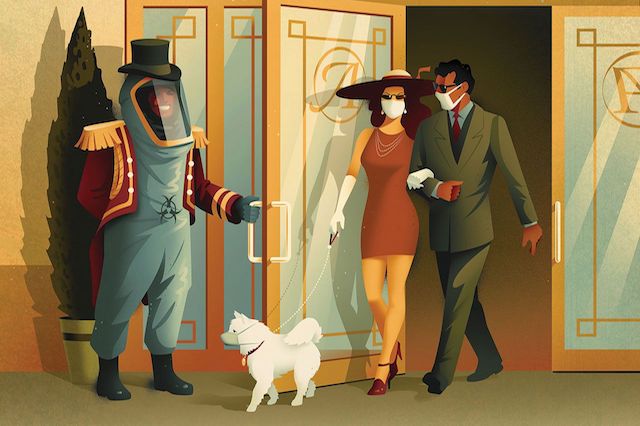 It's business as usual in New York, with or without coronavirus. Illustration: Kevin Fales

The last week saw a surge in coronavirus cases both in the U.S. and worldwide, driving a sharp downturn in global stock markets and raising concerns that the outbreak’s impact, both in terms of health and the economy, is poised to deepen.

The commercial real estate business isn’t immune. Real estate stocks have plummeted along with much of the rest of the market, as have the shares and near-term earnings expectations of many leading hotel chains. And, as Commercial Observer recently reported, concerns about disruptions in the supply chain for construction materials have some builders looking for alternative sources for supplies and examining contracts to see if they can be held liable for delays or cost overruns stemming from the outbreak.

That said, industry players remain sanguine regarding the possibility of the virus delivering a major shock to the system, with most predicting a relatively short term disruption — unless, of course, the outbreak manages to tip the economy into a recession, in which case commercial real estate will no doubt suffer along with everyone else.

“If this were to be persistent for several quarters, then I think you would see some impact on the performance of retailers and entertainment providers that could affect their ability to deploy capital and operate,” said Thomas Dobrowski, vice chairman at Newmark Knight Frank. “But if it is short term in nature, which I think most of us are expecting, I don’t think there is going to be any meaningful impact from a commercial real estate standpoint or a retailer standpoint.”

As for retailers who could be hardest hit in the near term, Dobrowski highlighted more discretionary gathering spots like restaurants, movie theaters, and gyms that patrons might decide to avoid for the duration of the outbreak.

Jonathan Wasserstrum, CEO and co-founder of commercial real estate leasing firm SquareFoot, likewise cited these spots as among the most vulnerable.

“If all of a sudden nobody wants to eat out at a restaurant or go to a yoga studio because they are scared of getting sick, then it could be really hard for those guys to keep the lights on,” he said.

Perhaps with such a scenario in mind, dance-based gym chain 305 Fitness sent out an email this week asking members to take extra precautions to avoid spreading germs and noting that the company would be flexible in returning credits for classes missed and in waiving late cancelation and no-show fees. Fitness chain SoulCycle likewise sent a message to its members saying it was allowing late cancellations to encourage anyone feeling sick to stay home.

Dobrowski said, though, that he doesn’t expect any long-term impacts on the retail space after the outbreak has ended.

“I think people will be cautious in the near term, but once things seem to be reverting to the norm, I can see folks going back to their traditional ways of shopping and interacting and spending money,” he said.

The hotel industry is playing a similar tune. Global hotel operators like Marriot and Hilton have seen their businesses in affected areas plummet. On Marriott’s recent Q4 earnings call, CEO Arne Sorenson noted that in February revenue per available room was down in China almost 90 percent year over year and that the company had closed 90 of its 375 properties in the country.

Sorenson noted that given the uncertainty around the duration and severity of the outbreak, the company could not fully estimate the impact it would ultimately have on its business. However, he said that he expected the negative effects to “quickly fade” once the outbreak resolves.

“Even if tomorrow the CDC says nobody should go to the office, well, everyone still has office leases, so that doesn’t change,” he said.

“If you have a landlord who has a 10-year lease with an occupier, if [the occupier] doesn’t show up to work for a couple of months, they are still on the hook for the rent,” noted Francesco De Camilli, vice president, head of flexible workspace consulting at Colliers International.

De Camilli added that some in the flexible workspace sector are seeing a potential opportunity in the situation.

He cited a recent meeting with a number of executives responsible for developing contingency plans for moving staff and materials around in the event of an office closure. For those firms who don’t already have their own alternative office spaces, flex or coworking spaces could prove a useful option, he said.

“Say you’re in Manhattan and there’s either a government-imposed sanction or a self-imposed sanction, but you don’t want to shut the business down, so you move your employees to New Jersey or Connecticut to work out of a WeWork or IWG there for a couple of weeks or a couple of months,” he said. “I don’t want to be a doomsayer, but I think that we haven’t seen the worst, and nothing of real significance has unfolded yet in terms of a shock to the business environment in New York. Flex or coworking could be an alternative for companies that might not have backup options.”

If there is to be a substantial impact on the commercial real estate business, it hasn’t made itself felt in New York or the broader U.S. yet.

“Business-wise, real estate-wise, I’m still seeing the same type of activity I was seeing two weeks ago,” said Jeffrey Schwartz, a partner at law firm SSRGA. “I’m seeing people in the office being concerned about commuting and are they at risk, but I’m not seeing transactional stuff slow down yet.”

Wasserstrum likewise said that he had yet to see any major concrete effects.

“If someone signed a five-year lease three years ago, it doesn’t matter if market rents are up or down 30 percent today, because they are in a lease,” he said. “So, it takes a while to start seeing large macro changes wend their way through the system.”

That said, the outbreak has added some complications to the leasing process. One prospective SquareFoot client recently decided to postpone their search for New York area real estate, citing the uncertainty in the market stemming from the coronavirus situation. Another client looking for office space in the city is considering pushing off his search given the trouble he has encountered in arranging travel.

The virus has also added a bit of awkwardness to business interactions.

“Usually when you greet a client, everyone shakes hands. That’s a thing of the past,” Wasserstrum said. He recalled that when one of his brokers went this week to greet a client, they both agreed to just wave instead. Other industry players have shared stories of the “elbow bump” becoming the de facto greeting.

The virus is also shutting down meetings and conferences within the business. Two weeks ago, one major brokerage banned meetings of more than 25 employees in its conference rooms, according to one industry source. In late February, organizers of the MIPIM International Property Fair scheduled to take place in Cannes, France, from March 10 to 13 announced that they were pushing the gathering to June due to the epidemic. IMN canceled its Investors Conference on CRE CLOs, which had been scheduled to take place in New York on March 12.

Wasserstrum noted that the primary concern is not so much that the commercial real estate space specifically will suffer, but rather that the broader economic impact of the virus will tip the economy into recession and bring down the real estate business with it.

“If the news gets worse and there are more worries in the economy, then you’ll start seeing an actual change with people slowing down decision making,” he said. “We’ve been, not just as an industry but as a country, in a 10-plus year bull market now. So if alarms bells start ringing that say, hey, the economy is about to hit a slowdown, then companies are going to slow their growth plans. And if they slow their growth plans that has a knock-on effect for how much space they take, how much they are willing to pay for space, and all sorts of other things.”